The Limits of Intelligence 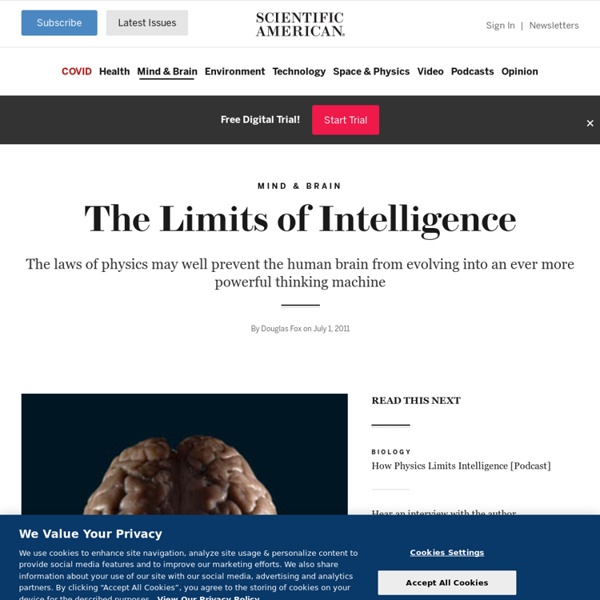 Santiago Ramón y Cajal, the Spanish Nobel-winning biologist who mapped the neural anatomy of insects in the decades before World War I, likened the minute circuitry of their vision-processing neurons to an exquisite pocket watch. He likened that of mammals, by comparison, to a hollow-chested grandfather clock. Indeed, it is humbling to think that a honeybee, with its milligram-size brain, can perform tasks such as navigating mazes and landscapes on a par with mammals. A honeybee may be limited by having comparatively few neurons, but it surely seems to squeeze everything it can out of them. At the other extreme, an elephant, with its five-million-fold larger brain, suffers the inefficiencies of a sprawling Mesopotamian empire. Signals take more than 100 times longer to travel between opposite sides of its brain—and also from its brain to its foot, forcing the beast to rely less on reflexes, to move more slowly, and to squander precious brain resources on planning each step.

BILINGUAL GLOSSARY OF MULTIDIMENSIONAL QUALIFIERS OF INTELLIGENCE - Designates the cognitive abilities of a community as a result of multiple interactions between members, or agents, - This is a constitutive phenomenon of life: the ability of a group of individuals working together to anticipate / build their own future and achieve complex context - It is also a "field of research and development [which] is interested in how living individuals organize themselves to work, calling up companies and operating as a unified whole whose properties clearly show that anything emerging is much more than the sum of its parts

Top 10 Strange Phenomena of the Mind - Top 10 Lists Humans The mind is a wonderful thing – there is so much about it which remains a mystery to this day. Science is able to describe strange phenomena, but can not account for their origins. While most of us are familiar with one or two on this list, many others are mostly unknown outside of the psychological realm. This is a list of the top ten strange mental phenomena.