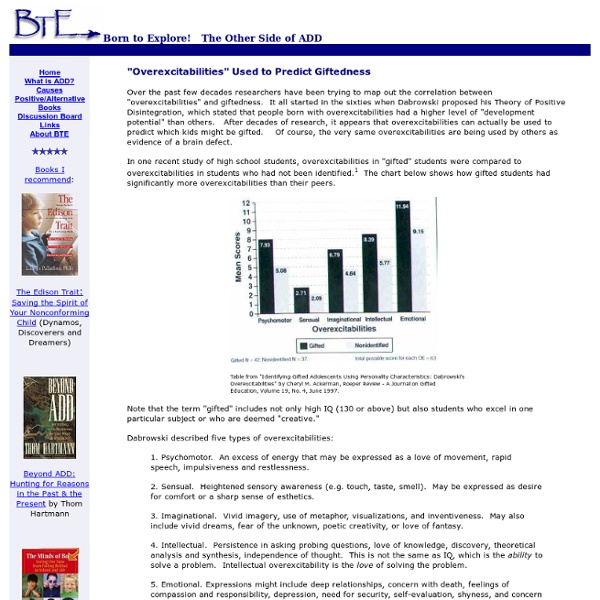 Overexcitability and the Gifted Overexcitability and the Gifted by Sharon Lind A small amount of definitive research and a great deal of naturalistic observation have led to the belief that intensity, sensitivity and overexcitability are primary characteristics of the highly gifted. OVEREXCITABILITIES Overexcitabilities are inborn intensities indicating a heightened ability to respond to stimuli. PSYCHOMOTOR OVEREXCITABILITY Psychomotor OE is a heightened excitability of the neuromuscular system. Allow time for physical or verbal activity, before, during, and after normal daily and school activities-these individuals love to “do” and need to “do.” SENSUAL OVEREXCITABILITY Sensual OE is expressed as a heightened experience of sensual pleasure or displeasure emanating from sight, smell, touch, taste, and hearing (Dabrowski & Piechowski, 1977; Piechowski, 1979, 1991). Show how to find the answers to questions. EMOTIONAL OVEREXCITABILITY Emotional OE is often the first to be noticed by parents.

Teaching the Gifted and Talented: 33 Websites Where You Can Find Good Resources I wish the Internet was available to me as a kid in elementary school. In New York City, where I attended kindergarten through sixth grade, they called the gifted and talented class "SP". I remember being put into a class to learn French, but very little else. I figured out how ahead I was only when I entered junior high school in New Jersey. The French language I had studied for three years allowed me to coast through French class for the next four years. LESSON PLANS41 Ways to Go Beyond the Book Report Edsitement- from the National Endowment for the Humanities Gifted and Talented Education Lesson Plans Helpful Sites for Gifted Students Lesson Plan Resources- from Davidson GiftedMrs.

Your Brain Knows a Lot More Than You Realize | Memory, Emotions, & Decisions Meanwhile, a similar story was unfolding oceans away. During World War II, under constant threat of bombings, the British had a great need to distinguish incoming aircraft quickly and accurately. Which aircraft were British planes coming home and which were German planes coming to bomb? It was a grim attempt. With a little ingenuity, the British finally figured out how to successfully train new spotters: by trial-and-error feedback. The Knowledge GapThere can be a large gap between knowledge and awareness. Consider patients with anterograde amnesia, who cannot consciously recall new experiences in their lives. Of course, it’s not just sexers and spotters and amnesiacs who enjoy unconscious learning. Flexible IntelligenceOne of the most impressive features of brains—and especially human brains—is the flexibility to learn almost any kind of task that comes their way. The Liar in Your HeadOn December 31, 1974, Supreme Court Justice William O.

Using Bibliotherapy with Gifted Children - Unwrapping the Gifted Hopefully we’ve all had that experience of reading a book that powerfully “spoke” to us, a book whose characters we could relate to, and whose struggles and triumphs we identified with. Taking this experience a step farther is the strategy of bibliotherapy, the process of helping the reader learn about and cope with any social or emotional struggles or developmental needs by identifying with a character in a book who shares a similar struggle or need. The reading is typically followed up by discussion with a trusted adult. Bibliotherapy of course can be done with all students, particularly students who might be experiencing a divorce in the family, a learning disability, adoption, etc. Today I want to talk a bit about using developmental bibliotherapy specifically with gifted students. A fair amount has been written already (see links at the bottom of this post) about what bibliotherapy is and why it's important to do with gifted students. * Who in the book do you identify with and why?

What Magnetic Fields Do to Your Brain and Body - The Crux (Credit: pippeeContributor/Shutterstock) There’s no escaping magnetic fields—they’re all around us. For starters, the Earth itself is like a giant magnet. A spinning ball of liquid iron in our planet’s core generates the vast magnetic field that moves our compass needles around and directs the internal compasses of migrating birds, bats, and other animals. On top of that, ever-industrious humans have produced artificial magnetic fields with power lines, transport systems, electrical appliances, and medical equipment. We may not be able to see, hear, feel, or taste the magnetic fields that surround us, but some may wonder whether they can still exert effects on our bodies and brains. Everyday Exposure A magnetic field arises whenever a charged particle, like an electron or proton, moves around. From time to time, a scientific study finds a link between living near high-voltage power lines and illness. An MRI machine. What’s the Threshold? Medical Magnets Out-of-this-World Magnetic Fields

Myths About Giftedness ~ by Mary Rocamora, M.A. ~ There are many myths about the gifted that are held in the mainstream culture. They permeate conventional parenting and our educational system, including private education. The gifted can make it by themselves — they don’t need any extra attention, either as children or as adults. Actually, gifted children and adults need more mirroring and mentoring than most people because there is more inside that is yearning to be lived. Even if you have extraordinary talents, keep your light under a bushel. One should never feel too good about one’s abilities or show them off except when invited or alone. You can be gifted on your own time. After you have done everything you “should” do, you will finally be free to do something meaningful or creative. In the awareness work we offer, the gifted are moved irrevocably away from the obligatory demands of family, friends, being a “good person,” and even our ideas about survival. You can’t earn a living being who you are.

Idealism and Perfectionism in the Gifted And the gifted child Perfectionism can be observed in even very young gifted children because of the lack of synchrony between their intellectual and physical development. For example, a three year old gifted child can see in her five year old mind what she wants to build, but her three year old fingers cannot do it and so she screams in frustration. The gap between a child's advanced intellectual capability and more age-appropriate social and physical skills can lead to unrealistic expectations for performance by both gifted children and their parents and teachers. Adults expecting social maturity to match high level intellectual development may label a highly articulate, logical child as a behaviour problem when he or she exhibits an age-appropriate tantrum. And the gifted adult Perfectionism can also be applied to the gifted self. However, problems can arise when they are not able to live up to these standards and blame themselves for not being good enough.

The SIFT Model Explanations > Brain > SIFT Model Sense the world | Infer meaning | formulate intent | Translate into action | deep stuff | So what? We understand and respond to the world through complex cognitive processes. The SIFT model is a simplification of the inner workings of the mind that helps explain how we perform this amazing feat. Either click on the areas of the diagram below for more detail, or read the summaries in the sections below. Sense the world We do not directly understand the world around us as the only interface we have is through the inputs from our five senses. Read more on the Sense page. Infer meaning The sensed inputs we receive are light, sound, pressure, etc. that have no meaning in themselves. Read more on the Inference page. Formulate intent Deciding what to do about the world is a choice between quick, intuitive reaction and slower, thoughtful consideration. Read more on the Formulation page. Translate into action Read more on the Translation page. Deep stuff

social-emotional needs of the highly gifted Fiedler, E. Highly Gifted Children The Hollingworth Center Vol. 12, No. 1, pp. 3-5 Spring 1998 This article by Ellen Fiedler presents the theoretical perspective for shedding light on psychosocial correlates of gifts based on Dabrowski. According to Dabrowski, the theory has two key facets: levels of emotional development and overexcitabilities or areas of intensity that individuals may possess. Each of these two facets are explained in the article. It was an interesting experiment. Widespread confusion and disagreement over concepts of giftedness seem to exist. The field of gifted education could benefit from more conceptual clarity. A theoretical perspective that currently seems to offer great promise for shedding light on psychosocial correlates of giftedness is that based on Dabrowski's work (Dabrowski, 1964, Dabrowski, 1972; Dabrowski & Piechowski, 1977; Piechowski, 1979, Piechowski, 1991; Piechowski, 1997, Silverman, 1993, Silverman, 1994). Level V: Secondary Integration.