Can You Hear the Flowers Sing? Issues for Gifted Adults 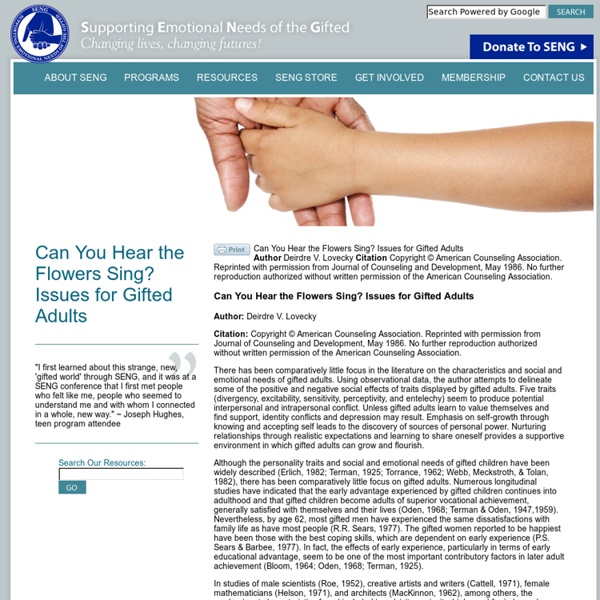 Can You Hear the Flowers Sing? Issues for Gifted Adults Author: Deirdre V. Lovecky Citation: Copyright © American Counseling Association. Reprinted with permission from Journal of Counseling and Development, May 1986. There has been comparatively little focus in the literature on the characteristics and social and emotional needs of gifted adults. Although the personality traits and social and emotional needs of gifted children have been widely described (Erlich, 1982; Terman, 1925; Torrance, 1962; Webb, Meckstroth, & Tolan, 1982), there has been comparatively little focus on gifted adults. In studies of male scientists (Roe, 1952), creative artists and writers (Cattell, 1971), female mathematicians (Helson, 1971), and architects (MacKinnon, 1962), among others, the predominant characteristics found included impulsivity, curiosity, high need for independence, high energy level, introversion, intuitiveness, emotional sensitivity, and nonconformity. Trait Descriptions Divergency.

Discovering the gifted ex-child Discovering the Gifted Ex-Child Abstract Most of the attention given to the gifted over the years has been devoted to gifted children, a population identified by unusual mental processing that sets them apart from the norms. Gifted adults, however, are recognized in our society solely by their achievements. The innate qualities of mind that are found in gifted children do not disappear as the children grow up. The unusual developmental trajectory of the gifted creates an extraordinary experience of life for the individual at any age, whether or not that individual is able to achieve in ways society recognizes and values. The achievement orientation that has always existed for adults and is now taking over the field of gifted education, makes it difficult for the gifted to understand the qualities of mind that make them different. Stephanie Tolan (Stephanie Tolan is a consultant, writer, and a Contributing Editor of the Roeper Review.) Who am I? Where Have the Gifted Children Gone?

Beyond the couch The Examined Life: How We Lose and Find Ourselves Stephen GroszChatto & Windus, 240pp, £14.99 What, exactly, is an “examined life”? One that is worth living, according to Plato’s Apology, in which he records Socrates, on trial for his life, arguing that “the unexamined life is not worth living”. The American-born psychoanalyst Stephen Grosz borrows the philosopher’s aphorism-in-extremis for the title of his book of case studies or “episodes”. Classically, the psychoanalyst is the blank surface on to which the client’s anxieties are projected. Grosz, true to type, relays a minimum of personal information. In his preface, Grosz writes that the book is about “our desire to talk, to understand and be understood. At its most primitive, the act of self-examination is what makes us human. The writer and philosopher Julian Baggini has argued that the Socratic maxim about the examined life is profoundly elitist. Psychoanalysis, however, has not.

The Science of Sleep: Dreaming, Depression, and How REM Sleep Regulates Negative Emotions by Maria Popova “Memory is never a precise duplicate of the original… it is a continuing act of creation. Dream images are the product of that creation.” For the past half-century, sleep researcher Rosalind D. Cartwright has produced some of the most compelling and influential work in the field, enlisting modern science in revising and expanding the theories of Jung and Freud about the role of sleep and dreams in our lives. In The Twenty-four Hour Mind: The Role of Sleep and Dreaming in Our Emotional Lives (public library), Cartwright offers an absorbing history of sleep research, at once revealing how far we’ve come in understanding this vital third of our lives and how much still remains outside our grasp. One particularly fascinating aspect of her research deals with dreaming as a mechanism for regulating negative emotion and the relationship between REM sleep and depression: The more severe the depression, the earlier the first REM begins. Donating = Loving Share on Tumblr

Is the sound of silence the end of the self? – Tim Parks Years ago, in my novel Cleaver (2006), I imagined a media man who is used to frantic bustle and talk going in search of silence. He flees to the Alps, looking for a house above the tree line – above, as he begins to think of it, the noise line; a place so high, the air so thin, that he hopes there will be no noise at all. But even in the South Tirol 2,500 metres up, he finds the wind moaning on the rock face, his blood beating in his ears. Then, without any input from his family, his colleagues, the media, his thoughts chatter ever more loudly in his head. As so often happens, the less sound there is outside, the more our own thoughts deafen us. When we think of silence, because we yearn for it perhaps, or because we’re scared of it — or both — we’re forced to recognise that what we’re talking about is actually a mental state, a question of consciousness. Silence, then, is always relative. Such a mental voice is also a source of self-regard. 26 July 2013 Comments

Bursting the Neuro-Utopian Bubble The Stone is a forum for contemporary philosophers and other thinkers on issues both timely and timeless. During my graduate studies in the Department of Religion at Columbia, I spent countless hours in the Burke Library of Union Theological Seminary, where I had a spectacular, cater-corner view of the construction and unveiling of the Northwest Corner Building, Columbia’s new interdisciplinary science building. Although the 14-story steel and aluminum tower was designed to complement the brick and limestone gothic tower of Union, its dominating presence on the corner of Broadway and 120th serves as a heavy-handed reminder of where we are heading. The ninth floor of this building houses a laboratory of Rafael Yuste, lead author of an ambitious brief that appeared in the prominent neuroscience journal Neuron in 2012. Pyschosocial problems cannot simply be solved in the neuroscientist’s lab. Tucker Nichols What precisely is objectionable about this vision? Benjamin Y.

Retro Revival: Man as Industrial Palace by Maria Popova Vintage German artwork on digital steroids, or why you house a factory. In 1926, German writer and artist Fritz Kahn came up with his famous Der Mensch als Industriepalast (Man as Industrial Palace) analogy. In 2006, German visual communication and animation student Henning Lederer discovered Kahn’s poster and decided to resurrect this complex and unusual way of explaining the body, growing on the original work and translating it into motion graphics. Lederer explores human physiology in six cycles — five representing the five main biological systems, and one melding them together into the complex human factory Kahn had envisioned. For thousands of years, human beings have used metaphors as ways of understanding the body. This is the wonderfully animated preview for the project: We find this project a particularly timely reminder of our growing inability to reconcile our incessant lust for technology with a dwindling appreciation of the purely human. Donating = Loving

Psychoanalysis in the Age of "Just Do It" What is the magical appeal of the slogan? “Do it” would certainly not have much punch, so the magic has to be in the “just.” Because human activity has three dimensions: thought, feeling, and action, the implication of “Just Do It” is that thought and feeling are to be ignored in favor of action. The Nike revolution deletes two of the three spheres of human experience, and judging from shoes sales, little is so irresistible to Americans. Does it seem strange that Americans would be so influenced by the injunctionto neither think nor feel? The idea of divorcing action from thought and feeling is what the Heidegger scholar, Julian Young, calls “Nikeism,” referring to the culture of “just doing it” as an impatience to act without attending to Being, that is, without any consideration for experience, the human process that may manifest in action. Now there cannot be a more antithetical position to Nikeism than the psychoanalytic stance. • The Art of the Possible.