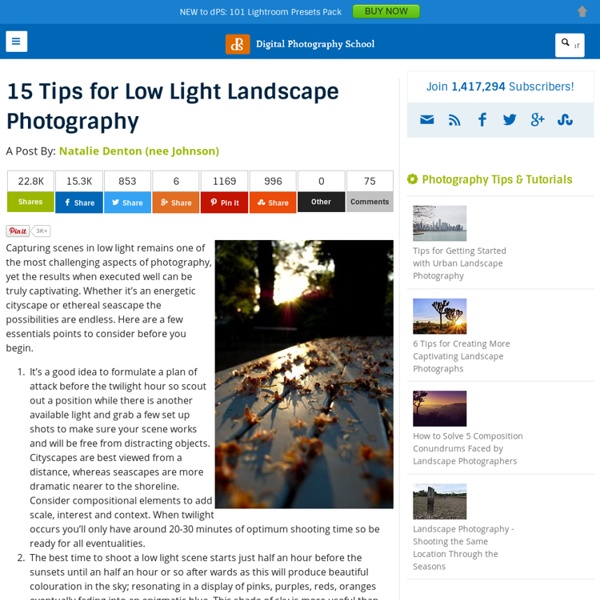 A Post By: Natalie Denton (nee Johnson) Capturing scenes in low light remains one of the most challenging aspects of photography, yet the results when executed well can be truly captivating. Whether it’s an energetic cityscape or ethereal seascape the possibilities are endless. Here are a few essentials points to consider before you begin. It’s a good idea to formulate a plan of attack before the twilight hour so scout out a position while there is another available light and grab a few set up shots to make sure your scene works and will be free from distracting objects. Cityscapes are best viewed from a distance, whereas seascapes are more dramatic nearer to the shoreline. Image by V31S70 So start by setting your camera upon a solid tripod and switching the unit to manual or shutter priority if you are wish. Image by kern.justin Image by Paco CT Incorporate a foreground element to add interest, scale and to help contextualise the piece. Read more from our category Most Popular 12657 Shares

Sunset Photography "Ah, Krakatoa, now those were sunsets! If only we had color film back then!" -Quote from the old, old, old photographer. With Iceland's Eyjafjallajokull volcano filling the skies of Northern Europe and Britan with ash from multiple eruptions, photographers in the areas where the ash is drifting may be in for some great sunsets for quite some time. Emotions « Masters of photography Brian Hopper Cristina Garzone Damir Sagol Dar Yasin Dar Yasin Dar Yasin David Goldman Can Cetin Caren Firouz Chris Osborne Chris Robbins

Take Better Pictures with Your Mobile Phone Photography isn’t limited to point and shoot cameras and DSLRs. A lot of phone manufacturers are putting high resolution cameras into their phones making them viable photographic tools. Apple, Samsung, HTC, etc. are pushing the phone photography into a new level. Almost all mobile phones have a camera.

2010 May 21 - Calm, Crescent Moon, and Venus Discover the cosmos! Each day a different image or photograph of our fascinating universe is featured, along with a brief explanation written by a professional astronomer. 2010 May 21 Calm, Crescent Moon, and Venus Image Credit & Copyright: P-M Hedén (Clear Skies, TWAN) Explanation: Last weekend, the Moon and Venus formed a beautiful close pair in the west after sunset, a scene enjoyed by skygazers all over the world.

Arches National Park Night Photography Arches are cool. Millions of years of wind erosion, soft rock, and what seems like a good bit of luck combine to create these famous geological landmarks that are literally one of a kind. Some of the most famous sandstone arches in the world are contained within Arches National Park, and I recently got the chance to travel out west to explore that area with two of my good friends, Mike and David (see this post for background). For a post about Arches NP, I thought I’d change it up with a step-by-step look at how some of the night photos (or wide-field astrophotography) happened. At times this post will devolve into photo-nerd-speak, so if your eyes glaze over when that happens, try less reading and more looking at pictures

106 of the most beloved Street Art Photos - Year 2010 More info. More info. More Banksy on Street Art Utopia. Lens distortion correction on post-processing Lens distortion is a technical aspect often overlooked by photographers. Strong lens distortion can ruin a good picture, especially when photographing people or architecture. This form of optical aberration is caused by how the lens projects the light rays over the flat sensor or film surface. Gothic Architecture Pictures All text and pictures © QT Luong. See conditions for use of pictures. There are 28 pictures on this page out of 228 pictures of Gothic Architecture. How I Light Paint Epic Milky Way Photos with the A7r If you’ve ever tried light painting in your astrophotography, you’ve probably discovered how ugly and unnatural artificial light can often look. One of the questions I get asked most often is how I manage to get such clean and atmospheric light painting in Milky Way images. Aside from using an awesome camera (in my case the Sony A7R), there is a certain method that I use to capture every part of my composition in a way that gives me maximum image quality and lots of control over light. One Exposure vs. Multiple Exposures If I want the absolute maximum image quality in my Milky Way light painting images, I’ll need to shoot multiple exposures each with different light painting techniques and then combine those in Photoshop.

koikoikoi.com - Visual Arts Magazine, graphic design, illustration, photography, interviews, inspiration, tutorials Born in 1968 in Yokohama, Japan, Nobuyuki Taguchi first began his photography back in 1991, when he was studying Fine Art in Sculpture at University in London. After finishing his MA course in 1995, Nobuyuki soon developed a deep interest in Information Technology and he became an IT professional. In 1999 he started “Digital” photography and has been spending more time on his photography since. In 2007 he started publishing his Black and White Photography on the internet. In May 2009 Nobuyuki’s photography article “Eye for a difference” was published in “Amateur Photographer” magazine. I selected 28 subjects that i most like, to see more you can surf nobuyukitaguchi.com

Tree Illusions Photographer Zander Olsen adds a white wrap around trees to create a visual relationship from the actual vegetation to surrounding landscape. Photos © Zander Olsen Link via Urhajos Sunset Photography: Tips to Get Amazing Sunset Photos - PhotoJeepers Sharing is caring! Photos taken at sunset capture the soft, diffused light that happens as the sun sets. The Golden Hour light, approximately 30-60 minutes before sunset, is a warm golden glow that produces long, soft shadows. After the sun disappears behind the horizon, the Golden Hour transforms into the Blue Hour. The characteristics of the Blue Hour are a much darker sky and soft blue hues.

Where Children Sleep James Mollison traveled around the globe and took some incredibly eye-opening photos of children's bedrooms. He then compiled them into a book, titled Where Children Sleep. Each pair of photographs is accompanied by an extended caption that tells the child's story. The differences between each sleeping space is striking. Mollison was born in Kenya in 1973 and grew up in England. Still life: Bent objects UPDATE: The Return of Bent Objects Wires transform these objects from inanimate to hilarious works of art. Little polish girl McDonalds as Sculpture Materials Yeah, this is where those come from Dancing Queens