The Best Hidden Features of VLC 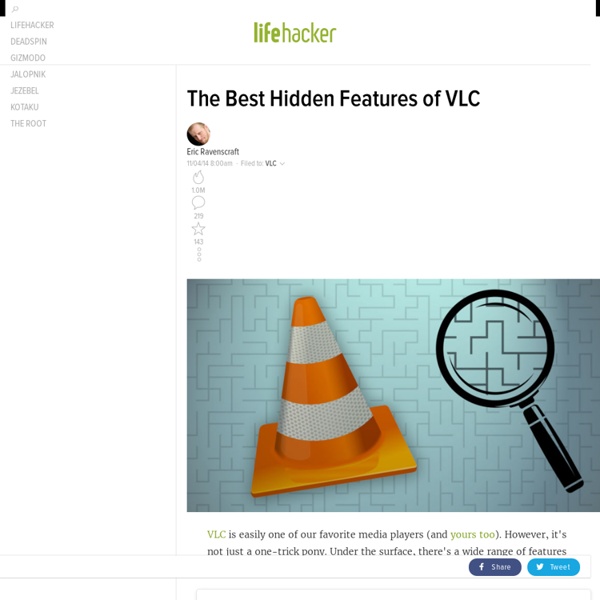 20 Things to Remember If You Love a Person with ADD It’s a fact; a person with ADD is hard to love. You never know what to say. It’s like walking through a minefield. You tiptoe around; unsure which step (or word) will be the one that sets off an explosion of emotion. It’s something you try to avoid. People who have ADD/ADHD are suffering. Learn the Knife Techniques you want to know in: Complete Knife Skills Class Description Become faster and more accurate with your knife work, and create dishes that cook evenly and look truly professional. Guided by chef Brendan McDermott, you’ll explore proper hand placement and the four fundamental cuts. Learn to dice, mince and julienne a range of produce.

Additional codecs fail to load on install? see ... Even in 2011, some of us still have CS3 Pro. Cost a bundle and am not ready to upgrade to latest. Meanwhile, everytime I start Premiere Pro I get "Additional Codecs that are not included in the trial version of Premiere Pro CS3 must be installed. Useful Websites Here is a list of websites we have featured in the past that might come in handy. Remember to set FuckingHomepage.com as your start page if you haven’t already. Educational/Learning favoriteandforget.com – Useful and educational links updated daily. Set it as your homepage and forget about it.khanacademy.org - video lectures on just about any subjectted.com - lectures by smart peopleinternetisuseful.com - for every educational website or useful web app out thereacademicearth.org - classroom lecturesfreerice.com - expand your vocabulary while feeding the hungrylizardpoint.com - a collection of geography quizzesmathrun.net - timed math quizzesclassicshorts.com - the best short storieserowid.org - learn about drugsqwikia.com - turn a Wikipedia article into a videounplugthetv.com - a collection of intellectually stimulating videosfactsie.com - a place to learn amazing and unusual historical and scientific facts

Most Popular File Encryption Tool: VeraCrypt Encrypting your sensitive data is important, but not all encryption tools are the same. Last week we asked you for your favorites, and then we looked at the top five file encryption tools and put them head to head. Now it's time to crown the community favorite. VeraCrypt, the spiritual (and in many ways, including its code, actual) descendant of TrueCrypt, took the top spot by a wide margin, bringing home close to 41% of the overall vote. It's free, (mostly) open source, cross-platform, offers strong encryption, and offers all of the great features TrueCrypt did before its developers abandoned it. Second place with 20% of the overall vote was 7-Zip, a file compression tool that also has the ability to create encrypted archives.

Thirteen Tricks to Motivate Yourself - lifehack.org Who needs Tony Robbins when you can motivate yourself? Overcoming the emotional hurdle to get stuff done when you’d rather sit on the couch isn’t always easy. But unless calling in sick and waking up at noon have no consequences for you, it’s often a must. Build a website with Kaliko CMS using WebForms Introduction The purpose of this article is to introduce you to Kaliko CMS - a new open source content management system (CMS) for ASP.NET - and to get you up and running by creating your first website using the system. Besides installing the framework and implement some basic things we will also touch more advanced subjects. Adobe Premiere Pro CS3 (download torrent) - TPB (Problems with magnets links are fixed by upgrading your torrent client!) Adobe Premiere PRO CS3 full version with serial and crack ABOUT: Top features Native tapeless editing workflow for Sony XDCAM and Panasonic P2 formats Import and edit content from Sony XDCAM and Panasonic P2 equipment natively, without transcoding or rewrapping. Deliver content quickly and efficiently with true native editing directly from XDCAM, XDCAM EX, XDCAM HD and P2 media. Or copy files to the hard drive to take full advantage of your systemâ€™s speed. Adobe Premiere Pro retains key metadata from the XDCAM and P2 media, making it available within the project window.

Startup Tools Startup Tools 1. Startup Tools Click Here 2. Lean LaunchPad Videos Click Here How to Teach Yourself Programming on the Cheap Want to teach yourself how to code, but don’t have a lot of extra scratch laying around to learn how to do it? Nowadays, there are tons of resources available on the Internet that you can use to get yourself up to speed on all of the most advanced coding languages, often without having to drop a dime for the privilege. Though only one of the learning portals listed here will actually leave you with a degree to pin on your wall by the time all is said and done, having the skills these websites provide is still a great way to get started in the world of independent contracting, and being able to build your very own websites on the fly. Khan Academy Khaaaaaan!

9 Things You Should NOT Have to Give Up to Be Happy Email “All happiness depends on courage and work.” ―Honoré de Balzac “This morning my best friend, Karl, confided in me that he’s having trouble playing a depressed character in our school’s end of the semester play. How to configure a USB printer with a Wireless Router Many of the advanced routers come with capability to configure printers and other USB devices on it so that you can access them as network devices from anywhere in your network. For example, if you configure a printer with your WiFi router, you can print from any computer in your WiFi network. In this article, I will talk about the steps involved in configuring a printer on a wireless router. In this example, I am referring to a Belkin N600 router and Canon LBP2900B laser printer. You can apply the steps mentioned here with any wireless router that supports USB devices. How does wireless printing work

Adobe Audition - Wikipedia, the free encyclopedia Adobe Audition (formerly Cool Edit Pro) is a digital audio workstation from Adobe Systems featuring both a multitrack, non-destructive mix/edit environment and a destructive-approach waveform editing view. Origins[edit] Syntrillium Software was founded in the early 1990s by Robert Ellison and David Johnston, both former Microsoft employees. Originally developed by Syntrillium as Cool Edit, the program was distributed as crippleware for Windows computers. The full version was useful and flexible, particularly for its time. Syntrillium later released Cool Edit Pro, which added the capability to work with multiple tracks, as well as other features.