Empty Your Inbox with the Trusted Trio 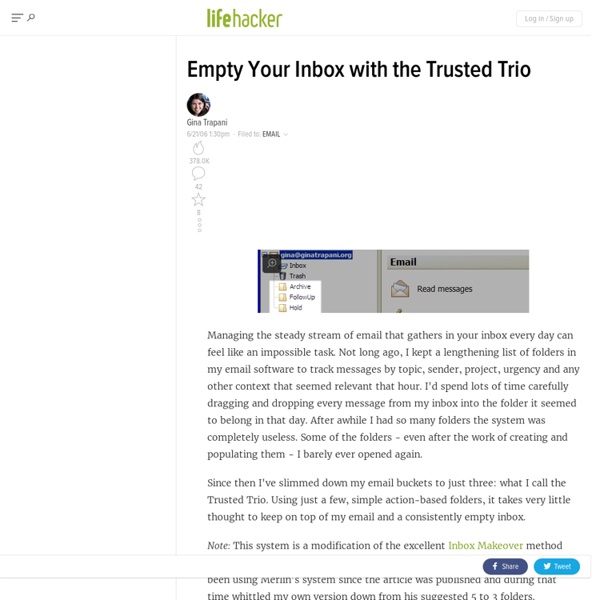 Top 10 Email Productivity Boosters SExpand The first message one could consider email was sent more than 30 years ago, and that's probably when people began associating angst and uncertainty with the words "Inbox" and "unread messages." The tools available to read and send emails have advanced considerably since then, but what you actually do with all that chatter, without eating up entire days of work time, is up to you. Luckily, we've covered a wealth of filtering and processing methods and software tweaks that make email less stressful and time-consuming over the years, and a list of our top 10 productive email boosters is after the jump.P 10. Mark/Prioritize messages sent only to youP If you're inside a big firm, or just part of a big email group, you probably get a lot of messages that aren't really addressed to you directly, but they land in the same bin as the others. 9. 8. 7. Sometimes we're our own worst enemies when it comes to email clutter. 6. 5. 4. 3. 2. 1. What inbox helpers and tools did we miss?

Flowchart For Figuring Out Which CC License To Use Creative Commons is a non-profit organization founded in 2001 that, over the years, has released a set of licenses that enable creative types to share their work with others. The content creator allows others to use their work, just as long as the users follow the guidelines set forth in that particular license. It’s a “some rights reserved” system rather than an “all rights reserved system.” In the photographic community, some aren’t fond of CC licensing while others are downright prolific about it. There are four parts to a CC license, three of which you can choose to include or leave out. Here’s the actual PDF to walk you through picking yours: As you can see, No Derivatives requires that the user not alter your original in any way, Non-Commercial stipulates that the image cannot be used to make money, and Share Alike requires that any resulting “remix” of the content be shared via the same licensing terms. Thanks for sending in the tip, Pete!

D*I*Y Planner | the best thing in printing since Gutenberg The AAEEBL ePortfolio Review The AAEEBL ePortfolio Review (AePR) The AAEEBL ePortfolio Review is under development. The first issue will appear in the summer of 2016. AePR will be issued electronically three times a year. The AePR style is academic but not necessarily scholarly. AePR Executive Editors Executive Editor: Cindy Stevens, Wentworth Institute of Technology Co-Executive Editor: Dave Dannenberg, University of Alaska Anchorage Managing Editor: Russel Stolins, Institute of American Indian Art Design and Production: John Cripps, University of Alaska Anchorage Design and Production: Keesa Johnson, Michigan State University Editorial Board RFP Form The first issue is focused on "evidence based learning." Keep the theme of "evidence based learning" in mind as you write your article for the proposal.

Zen Habits | Simple Productivity WordsFlow » Em Software Live-link and auto-magic-merge Word and Excel documents What if you could have a time machine to speed up your Microsoft Word-based editorial production in InDesign?What if you could place Word and Excel documents with live links in InDesign, and proceed with production, while your authors and editors continued working on the original documents? What if, when they had updates, you could magically merge their work into yours with a click (as a link update), without losing any work on either side, and with automatic notification of any conflicts?What if you could push your content changes back to the linked Word document at any time, staying synchronized with your authors and editors? What if you could export original InDesign content to a new linked Word document, allowing collaborators to work in their native tools, and then re-import their changes with a click, using the same magic merge? You can do all this, and more, with WordsFlow, your Word-based time machine. About that time machine

My organiser - blog to discovery - Revelations along the way to a simpler, happier and more successful life Needing a new organisastion system I am a big believer that it is important to develop your own organisation system that works for your lifestyle, so I have spent a lot of time developing my own organiser.Â In the last two years I have tried both paper and electronic systems and finally settled on a system using Rollabind discs and […] Also posted in organisation In need of a new organisation system I really like my current organisation system, but I have noticed one serious flaw recently; it is very easy to procrastinate when I’m selecting tasks. Organising my home tasks with a week planner I am a big believer that a good organisation system should work in the office as well as at home. Dealing with repeating tasks in a paperbased system Repeating tasks are important as they are frequently the small tasks that help make our lives run smoothly, e.g. reviewing project finances, tidying the house and phoning friends. My organiser – the remaining sections How I successfully plan my day

Hiring on Craigslist without flooding your email inbox My startup saved 40+ hours with a DIY recruiting tool. Learn how we did it. Craigslist is an invaluable and underutilized resource for startups. We’ve posted several jobs there, ranging from part-time content writers to user study participants. I’ve been consistently surprised by the quantity and immediacy of the responses, but daunted by the task of screening through them. Reading through responses with varying formats and content is a very messy and haphazard process, and it’s difficult to collaborate with other people. Traditional recruiting systems are overkill for this sort of task. In less time than we would have spent on the phone listening to a sales pitch, we made a DIY applicant tracking system using our own newly-released Airtable Forms feature that met our needs perfectly. Here’s how we did it. 2. 3. 4. 5. 6. We could chat and collaborate in the context of each job applicant, making it easy to coordinate followups. And that’s it! Here’s how to do it yourself

My new organizer « Corrie Haffly My history of organizer systems in bulleted list format: Early college years: Cheap DayRunner vinyl organizer with calendar refill and address bookLater college years: Leather DayTimer organizer that weighed about 50 lbs. with binder-ring style calendar, addresses, notepaper, etc., slots for ID and credit cards, zipper pocket, notepad, blah blah blah…Briefly: Hand-me-down Palm Pilot from my sister. Spent hours entering stuff into it, then stopped using it because the batteries got used up so quickly.Full-time employment years: Yellow legal notepad with tiny printed to-do items listed one after another, crossed off as completedInitial self-employed years: Cheap iPads.com calendar notebook with preprinted monthly sheets, weekly spreads, and pages in between each month for tracking expenses (I used it for tracking invoices), notes, etc. I think the Moleskine and Rollabind stuff will be most interesting to readers, so here are some pictures and descriptions: Page 5-92: Calendar. Download: