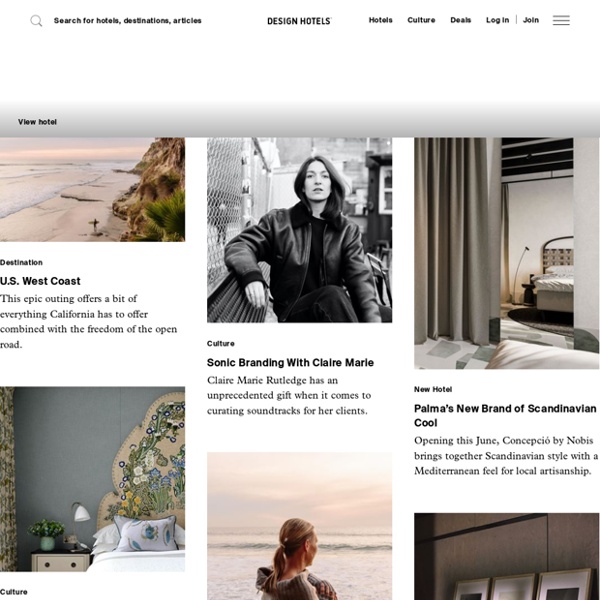 Best of Yanko Design 2011 & Yanko Design Best of Yanko Design 2011 Steve Jobs hired designer Hartmut Esslinger as the modern-day Snow White for his projects code-named after the seven dwarfs. The vision was to infuse Apple products with “born-in-America gene” and DNA inspired by “Hollywood and music, a bit of rebellion and natural sex appeal.” Hartmut’s mantra was simple, “Form follows emotion,” a twist on the maxim that form follows function. Yanko Design respects both these aphorisms but believes that we should not limit creativity within the realms of form, function and emotions; thus we follow Form Beyond Function. 2011 has been a significant year in terms of historical uprisings, financial stability, nature’s rebuke and the loss of visionaries. However the silver lining to the gloom is the perseverance of our belief that the best is yet to come.

Boutique Hotels Designtripper In Puglia, the flat, silty landscape is dotted with crumbling, abandoned masserias–fortified farmhouse estates (that look more like castles than farmhouses, but there’s not a perfect translation in English), built by landowners more than 500 years ago to protect their farms from pillaging Greeks and Normans and countless other warring factions. Off country roads and highways, you can see the massive, regal-looking structures lording over the olive groves, fruit trees and grapevines. Once they were guarded, fortified with looming towers and giant stone walls, now lopsided and crumbling into disrepair. I imagine they were pretty expensive to keep up, after enemy warfare and looting bandits were no longer a concern.

Sepp And Martina Kröll: Made by Originals With the Wiesergut, a bold contemporary retreat in the usually conservative Austrian Alps, Sepp And Martina Kröll followed their hearts while also embracing tradition. The Wiesergut was a long time coming, but, in a way, it was always there. Josef (Sepp) and Martina Kröll knew they’d someday take over the land in the valley of Hinterglemm owned by Sepp’s family. And for a long time, the couple—parents of three small children—slowly gathered ideas for what they’d ultimately do with the ancient ... “This love of detail is so important to me—that someone made something with love. Location vacances, location saisonnière, gîtes de particuliers - secondCASA Mes favoris Vous n'avez pas encore déposé d'objets dans vos favoris. Les logements les plus récents Maisons de vacances Appartements de vacances proposés par les particuliers sans prélèvement de taxe de démarchage. Pas de provision pour des réservations