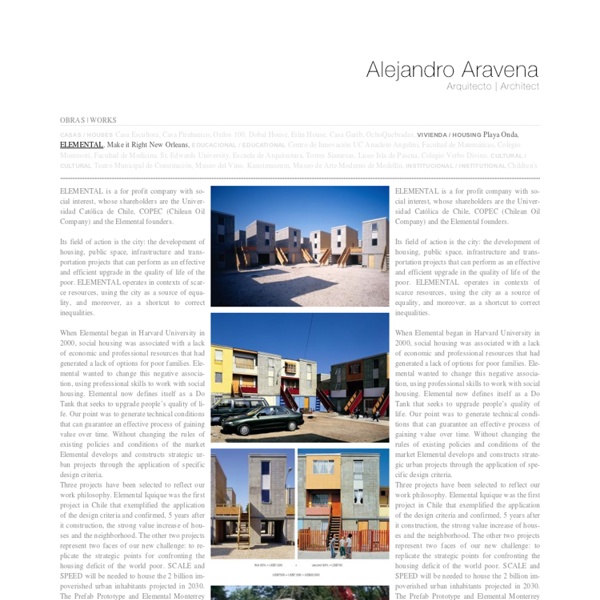 Kim Dovey Informal Settlements This project seeks to understand the urban morphology of what are variously known as 'squatter', 'slum' or 'informal' housing settlements. These are problematic words: a ‘squatter’ lacks land tenure; a ‘slum’ lacks space, durability, water or sanitation; and ‘informal’ implies a lack of control over planning, design and construction. Yet this is the major form of new urban design on the planet – housing over a billion people and projected to double by about 2030. Many squatter settlements have developed over time into well-serviced neighbourhoods – no longer 'slums' and with varying levels of tenure and formality. The prospect is to understand how informal urbanism works and to aid the transformation from 'slums' to decent housing and from 'squatting' to secure tenure. Collaborators: Wing Raharjo, Ross King Publications: Dovey, K. & King, R. Dovey, K. Dovey, K. & King, R.

Home | Safer Homes, Stronger Communities Safer Homes, Stronger Communities: A Handbook for Reconstructing after Disasters was developed on behalf of the Global Facility for Disaster Reduction and Recovery (GFDRR), to assist policy makers and project managers engaged in large-scale post-disaster reconstruction programs make decisions about how to reconstruct housing and communities after natural disasters. Post-disaster reconstruction begins with a series of decisions that must be made almost immediately. Despite the urgency with which these decisions are made, they have long-term impacts, changing the lives of those affected by the disaster for years to come. As a policy maker, you may be responsible for establishing the policy framework for the entire reconstruction process or for setting reconstruction policy in only one sector. The handbook is emphatic about the importance of establishing a policy to guide reconstruction. Thank you for visiting.

Global Village Program Builds with Global Village offer the opportunity to learn and share culture. Not only do we build homes for truly amazing people, but we also experience the food, language, rituals and traditions that make up their culture. In this exchange, we tighten the global connections between ourselves and our new global friends. About Dominican Republic The Dominican Republic occupies the eastern two-thirds of the island Hispaniola, which is shared with Haiti. The climate of the Dominican Republic is mostly tropical. Since then, Habitat for Humanity has built in nine regions of the Dominican Republic: Barahona, Paraíso, Polo, Jaquimeyes, Tamayo, Nagua, San Juan de la Maguana, San Francisco de Macorís and the city of Santo Domingo. Concrete blocks, cement, iron rods, sand and gravel are used to build houses in the Dominican Republic. You can learn more at or The team will stay two people per room.

Spatial Agency Spatial Agency is a project that presents a new way of looking at how buildings and space can be produced. Moving away from architecture's traditional focus on the look and making of buildings, Spatial Agency proposes a much more expansive field of opportunities in which architects and non-architects can operate. It suggests other ways of doing architecture. In the spirit of Cedric Price the project started with the belief that a building is not necessarily the best solution to a spatial problem. The project attempts to uncover a second history of architecture, one that moves sharply away from the figure of the architect as individual hero, and replaces it with a much more collaborative approach in which agents act with, and on behalf of, others. Although Spatial Agency started out as a critique of the conservative tendencies of mainstream practice, it ended up as a celebration of the bravery, canniness and optimism of an inspiring group of historical and contemporary figures.

seamlessHousing seamlessHousing text. The method chosen in order to deal with the problem is creating a mechanism of growing architecture as a planning tool. A workflow I called "hybridAlgorithm" was developed, uniting the human architect with the computer in order to create a logical hierarchical growth mechanism. As the site is inserted into the system, "Forces" are defined by the user (the Architect) as lines, volumes and points, giving them strengths and decay methods. This resembles the conventional planning method of defining a "total scheme" for the site, only now this scheme becomes a diagram of statistical powers affecting each point of the site.

The Rise And Fall Of Poverty Porn The dramatic pseudo-orchestral music of '80s action-movie schlock begins. Arnold Schwarzenegger appears on the screen, and for the next three minutes gets progressively more bloodied, beaten, and battered as he fights to rescue his on-screen daughter. This isn’t a trailer for the movie Commando. It’s a narration by Alex, a precocious 9-year-old Tanzanian boy who is--as 9-year-old boys tend to be with violent movies--obsessed. The three-minute YouTube video cuts back and forth between Alex and clips from the movie, as he narrates every key plot twist, complete with action moments and sound effects. The irreverent joy of a child’s imagination is inescapable. And that’s the point. The modern era of the humanitarian crisis was born on American televisions in 1968. Within a few months, mass starvation began. In the subsequent three decades, humanitarian organizations became more and more adept at leveraging images of poverty, disease, and famine to access charitable donations.

Strategic Proactive Business Development for Architects These days clients who issue RFPs for architectural services are receiving roughly 60-75 proposals, when they used to receive 20-25. More firms are throwing their hats in the ring because of fewer opportunities. If the first exposure a new client has to your firm is receiving your proposal, keep reading. Step 1 | Achieve Clarity about Your Architectural Practice Proactive business development begins with having a very clear understanding of your firm. Step 2 | Plan Your Business Development Strategy To create a meaningful strategic plan for growing your practice, it’s best to look back at the last three years, and then look forward for two to three years. Step 3 | Identify Market Sectors If you ask an architect what his or her firm does, the person will likely recite a list of markets served, “We design health care, government, higher education, and office buildings.” Anyone marketing to higher education knows that it isn’t enough to have general campus experience.

Welcome to the Brisbane Housing Company » Brisbane Housing Company DISTOPIA LAB Jaigaon Jaigaon (Nepali: जयगाउँ) is a small town in Jalpaiguri district in the Indian state of West Bengal, near the Bhutan border. The town lies at the gateway to Bhutan – Phuentsholing, and is thus a very thriving place of trade. The main source of income for the vast majority of people here is through the Bhutanese citizens that come down to Jaigaon in order to buy their monthly and weekly ration. The main entrance to Bhutan is through Jaigaon. It lies on the banks of the [Torsa] river. Environment[edit] Being a border town Jaigaon has a secular population who live in a brotherly manner within themselves.People from all parts of the country and have resided here just in search of job or to do business.The major population consists of Bengali, Bihari, Marwari, Nepali. The weather of Jaigaon is pleasant and has a Mediterranean type of climate. Hill Down View Of Jaigaon Geography[edit] Jaigaon is located at WikiMiniAtlas Demographics[edit] Education[edit] Jaigaon lacks in medical facilities.

The Changing Face of Housing – Your Views from #citytalk This post is also available in: Chinese (Traditional) Last Monday, a hoard of urbanists sat in front of their computers to discuss the changing face of housing as part of our second #citytalk tweetchat (no idea what a tweetchat is? – more info here). Hosted by This Big City and Future Cape Town, our second chat featured Kasey Klimes of Secret Republic and Gavin Silber of Cape Town’s Social Justice Coalition as special guests, alongside countless other eager tweeters. The discussion was even more fast-paced than our first chat, with the eight questions we discussed reaching over 44,000 people. We kicked things off by asking how housing is changing in your city, with @JeremySenko, @urbanchords and myself noting that newer developments were producing smaller houses in Vancouver, Chicago and London, respectively. We moved on to ask how governments can make the most of their limited social housing budgets. We then got on to the complicated subject of gentrification, asking ’is it a bad thing?