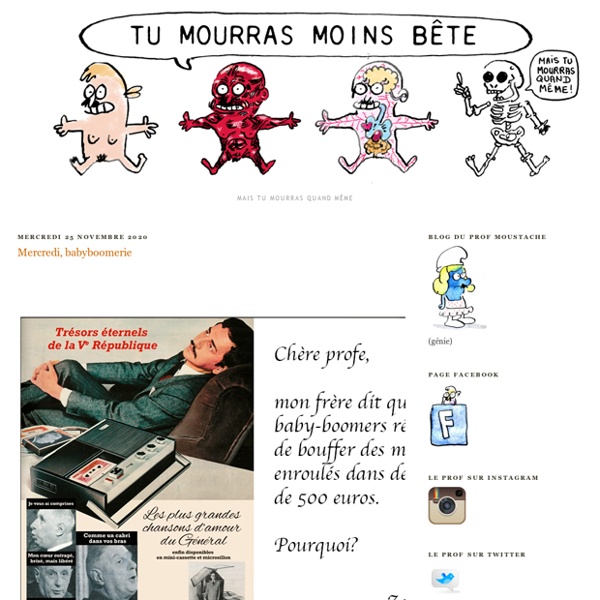 Le blog des tendances design, technologies, architecture, web - Posted by Kat Bauman | 11 Apr 2014 | Comments (0) Yep, it's Friday, get ready to waste some time and feel fine doing it. Skip your next Facebook break and try out the addictive game Super Planet Crash—build planetary systems, watch as they destroy themselves, collect points and think about gravitational relationships for fun!

The 50 Healthiest Foods of All Time (With Recipes) Why it’s good for you: Light meat is a fine choice, but there’s no reason to be afraid of the dark. The fat in dark meat contains a hormone called cholecystokinin, or CCK, which is partly responsible for satiety, so a little bit of dark meat can go a long way, especially if you’re watching your weight. Further, dark meat contains myoglobin, a protein which delivers oxygen to muscle cells. Dark meat also has more B vitamins than white meat, making it a nutrient-rich protein source that’s tasty and satisfying, and meat from the leg and thigh are rich in taurine. Studies have shown that taurine can lower the risk of coronary heart disease in women and it may also help protect against diabetes and high blood pressure.

The topologist's map of the world - Vivid Maps This map, at first glance, similar to a medieval map of the world ‘mappa mundi’, is the topologist’s map of the world, showing international borders, and nothing else. Topology in math is the study of properties that are preserved when a shape is curved or elongated. So a circle and a square are topologically equal because they are both a simple loop.

Usability Do’s And Don’ts For Interactive Design - Smashing Maga Advertisement We often talk about how to make our websites more usable, whether it’s tweaking the HTML structure of pages to benefit the user’s process or figuring out how best to display a message via CSS. But we never bring this thought process into our jQuery-based (and other JavaScript-based) elements. How can we enhance the user experience and usability of our jQuery events?

50 best foods in the world "There is no love sincerer than the love of food," George Bernard Shaw said. Judging by the number of amazing dishes out there, he was right. But which are the tastiest? Which are the best foods? We’ve scoured the planet for what we think are 50 of the most delicious foods ever created. No doubt some of you will be left reeling: “How did French fries not make the list?!” english Version E-mail us at freemagenta@lava.nl to place your order or request a price. Would you like a ‘C YK t-shirt’? Send us an e-mail, with your size ( S, M, L or XL, and whether it should be a girl or boy’s shirt.

Heart Vs. Brain: Funny Webcomic Shows Constant Battle Between Our Intellect And Emotions Advertisement Our brains and our hearts have a very interesting relationship, and it is their crazy back-and-forth that Nick Seluk, the artist behind the popularAwkward Yeti webcomic (which also had these wonderful comics on depression), plays upon with his Heart And Brain comic series. Heart, who always wants to live life to the fullest, often conflicts with Brain, who often wants to take the most responsible and rational path. Once in a blue moon, however, they come to work in unison and harmony – just like in real life! On October 20th, Seluk will release this fun comic series in a book that you will be able to buy on Amazon. If you like his work, be sure to check it out!

50 Powerful Time-Savers For Web Designers - Smashing Magazine Advertisement There are tools that make our lives much easier. However, finding those obscure time-savers which would save time in every single project isn’t easy and requires a lot of time. At Smashing Magazine, we are regularly looking for such useful tools, gather them, review them and eventually prepare for a truly smashing round-up. Such posts are quite lengthy and extensive, but they are always worth checking out.

If WWI was a bar fight Germany, Austria and Italy are standing together in the middle of a pub when Serbia bumps into Austria and spills Austria's pint. Austria demands Serbia buy it a whole new suit because of the new beer stains on its trouser leg. Germany expresses its support for Austria's point of view. Britain recommends that everyone calm down a bit. Serbia points out that it can't afford a whole suit, but offers to pay for the cleaning of Austria's trousers.