The Art of Complex Problem Solving 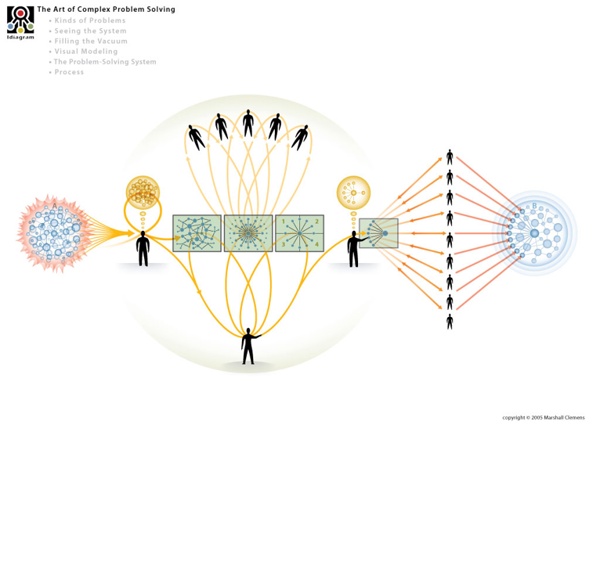 How to Use 43 Folders A very simple guide to leaving here quickly so you can get back to making something awesome. Ask yourself… Why am I here right now instead of making something cool on my own? What’s the barrier to me starting that right now? Smart, dumb, candybar, flip, and brick: a visual history of mobile phones For most of their history, mobile phones have been shrinking. Small meant portable; it even, in the not too distant past, was a sort of status symbol. Remember Motorola’s runaway hit, the ultra-thin Razr? But something funny happened on the smartphone’s way to success. Even as the phones themselves became thinner and lighter, their screens started to grow. This trend was driven by consumer demand, but what made it possible were simultaneous improvements in a handful of unrelated technologies.

Too complex to exist - The Boston Globe ON . 10, 1996, a single power line in western Oregon brushed a tree and shorted out, triggering a massive cascade of power outages that spread across the western United States. Frantic engineers watched helplessly as the crisis unfolded, leaving nearly 10 million people without electricity. Even after power was restored, they were unable to explain adequately why it had happened, or how they could prevent a similar cascade from happening again - which it did, in the Northeast on Aug. 14, 2003. Over the past year we have experienced something similar in the financial system: a dramatic and unpredictable cascade of events that has produced the economic equivalent of a global blackout. As governments struggle to fix the crisis, experts have weighed in on the causes of the meltdown, from excess leverage, to lax oversight, to the way executives are paid.

MythWeb John Hasnas (1) Copyright 1995 by The Board of Regents of the University of Wisconsin System Reprinted by permission of the Wisconsin Law Review Originally published in 1995 Wisconsin Law Review 199 (1995) Stop! 10 Lame Documents that Would Be Better as Infographics Infographics, it seems, have taken the media by storm. Because they are visually attractive, eye-catching, accessible, fun, and–if done well–quickly and effectively informative, people are drawn to them. And businesses have caught wind of this. We see infographics in magazines, on blogs, and even on corporate “About Us” pages in order to sell news, ideas, and products. But what if infographics were used for more “common” documents–the stuff we use day-to-day? 3 Ingredients For Accessing Your Creative Genius You are able to do a certain set of things better than anyone else. This is your core genius. It is your original brand of brilliance. For instance, some people are excellent at interpersonal relating. As a result, they attract top-talent into their organization and gain buy-in for projects extremely quickly.