The Standard for Influence 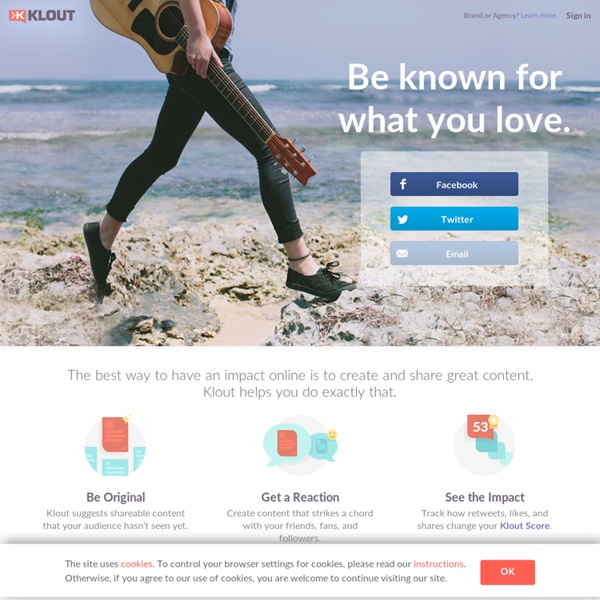 Why We Love Having a Content Calendar (And Why You Will Too) If you’re anything like MailChimp, your business started small—and so did your social media strategy. But when you’re a growing company, your approach to connecting with users and telling your story online needs to grow, too. You’re probably already planning some changes for 2016, and we’ve got a suggestion: Embrace the content calendar. Our social media strategy used to consist of a guy named Austin and his sticky notes.

Two Guys in a Garage Build a Business with Elance Share Sure, I could tell you about the 165,000 different expert professionals there are on Elance, or how businesses and entrepreneurs everyday on Elance are getting started, but in reality, seeing it in action is a whole different experience. Quoc Bui and Michael Moon, founders of Free the Apps, stop by and share their story, strategies and experiences in a multi-part blog series. How is it possible that two 26 year old guys can start and maintain an $800,000 a year business with limited resources and only a few hours a week?? Using Context Field, Boxes and Views Boxes for layout control Erik has previously posted about how we currently use Boxes and Views Boxes for inline editing and a much more powerful approach to dealing with customizing blocks. When you combine that with Context Field, you can effectively have a highly flexible way to administer page layouts and curating content that is still elegant enough for editors and site builders. This walkthrough is a demonstration of how to set things up for this purpose, and it’s only one use case.

Walter Spires on LookUpPage About Me Walter's vision is to build the Desperate Men platform through the development of biblically-based resources for men in every media format and social media outlet to reach and teach millions before he "goes Home." Walter has spoken nationally to thousands of people in venues from major corporate and association meetings and ministry conferences and events for church and para-church organizations. He has also been a guest on television and radio. Walter and his wife, Gigi, have been married 33 years and have three grown children, two of whom are married.

Topsy - Real-time search for the social web With iOS 9, Search lets you look for content from the web, your contacts, apps, nearby places, and more. Powered by Siri, Search offers suggestions and updates results as you type. There are two ways to use Search on your iOS device. Quick Search Drag down from the middle of the Home screen and type what you're looking for. Subject Line Data: Choose Your Words Wisely Most people quickly scan the subject lines in their inbox before deciding which messages are worth their time and attention. With so much pressure on the subject line to entice the potential reader, we thought it would be interesting to see how much of a difference a single word can make in a campaign’s open rate. To get some answers, we studied approximately 24 billion delivered emails with subject lines composed of approximately 22,000 distinct words. If you think that sounds like a lot of data, you’re right.

Get an Apple iPad Dock for $9.97 An iPad stand is one thing. An iPad dock gives you a place to both sync and charge your tablet while keeping it upright--great if you like to use it as, say, a photo frame . I've always thought the Apple-branded iPad Dock was a bit of a rip-off at $29. (Actually, a lot of Apple-branded accessories are overpriced, but that's a discussion for another day.) But 10 bucks? Now you've got my attention. OpenPublish for Drupal 7 - alpha release Today, we issued the Alpha release of OpenPublish on Drupal 7. This is truly a “developer’s release” focusing on core capabilities necessary for a news and publishing website. Unlike OpenPublish releases in the past, it comes with no flashy sub-themes, no bells and whistles. This is an early release of OpenPublish, meant for testing, use, and contribution by experienced developers in the Drupal community. You won’t find a “website in a box” here, and we have good reasons why. What’s in it and why

4G LTE Moto E will be updated to Android Marshmallow in select markets, along with DROID Turbo 2, Maxx 2 and X Force Motorola first announced its Android 6.0 Marshmallow rollout plans in October. At the time, 11 devices were included in the list that was mostly made up of devices from 2015 and 2014. One notable absence was the Moto E, the company’s entry-level smartphone. Thankfully, the list has since been updated and now includes the budget device, although if you have one in the US, you’re out of luck. The update seemingly won’t grace US shores. resources.datanyze What’s the difference between high-performing and underperforming sales organizations? The sales process. According to an HBR survey of sales leaders, 51% of high performing sales organizations had a formal, structured sales process. In another study, 57% of respondents identified improving the sales process their biggest priority for improving sales performance. Source For sales managers, optimizing the sales process can result in dramatic improvements in effectiveness and efficiency.