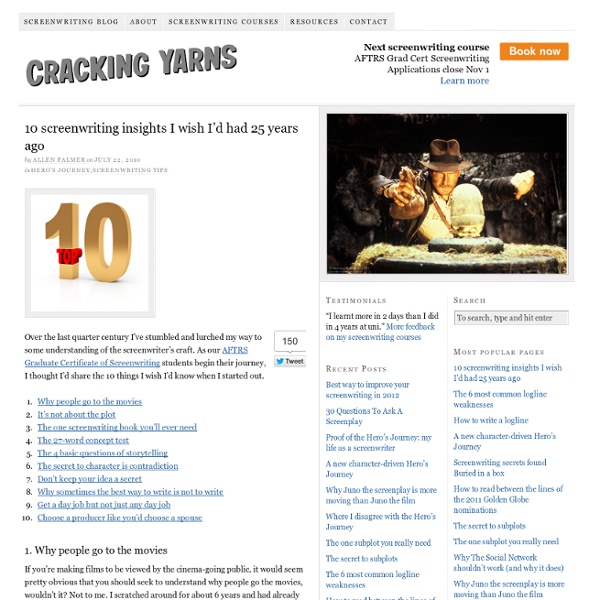 Over the last quarter century I’ve stumbled and lurched my way to some understanding of the screenwriter’s craft. As our AFTRS Graduate Certificate of Screenwriting students begin their journey, I thought I’d share the 10 things I wish I’d know when I started out. 1. Why people go to the movies If you’re making films to be viewed by the cinema-going public, it would seem pretty obvious that you should seek to understand why people go the movies, wouldn’t it? Not to me. “What people are seeking is the feeling of being alive. They want to be moved, guys. Learn more about why people go to the movies 2. Most writers starting out think story is plot and when you ask them to tell you about their film they’ll go, “Well, this happens, and that happens, and then this other things happens, and oh, and I forgot to tell you, there’s this three-legged dog who can talk … “ However, once you understand that people want to be moved, you should realise that the main game in story is not plot. 3. 4. 5. 6.

Michael Clayton Beat Sheet Written and Directed by Tony Gilroy Running time: 116 minutes Year: 2008 PROTAGONIST: Michael Clayton, a mid-40’s, high-powered law firm’s fixer.CHARACTERIZATION/MAIN MISBEHAVIOR: former gambling addict and fixer of immoral actions. He is a demoralized man in the midst of financial strain.EXTERNAL GOAL: To pay off the loan shark / To solve Arthur’s murderINTERNAL GOAL: To find purpose in life / To redeem himself of past sinsMAIN DRAMATIC CONFLICT: Arthur and U/North.THEME: Redemption can come with a high price.CENTRAL DRAMATIC QUESTION: Will Michael redeem himself for years of playing clean-up for the immoral games of others?ENDING: Michael secretly tapes a confession from U/North CEO, Karen Crowder, for both Arthur’s murder and his attempted murder, and single-handedly takes down both U/North and Kenner Bach.ARC: Michael goes from a fixer of immoral actions, to man a who sacrifices his career and wealth to call attention to the unethical deeds of both U/North and Kenner Bach.

111 Free Filmmaking Tools Last week we brought you 588 Free Film Contracts and Forms. In a effort to continue our “indie stimulus plan,” this week we’ve gathered together 111 free filmmaking software programs. Keep an eye out of upcoming features highlighting even more free stuff. 15 Amazing Animated Short films We all love short animated films, but creating short film is very hard task. Putting whole story in 5 to 10 minutes is not easy. Can you imagine? Few films produced after working hard more than 6 years! Here we collected 15 dazzling animated short films for your inspiration. You can find different genres in these movies like heart-touching film One life, frightening film The Passenger.

202 DIY Filmmaking Tutorials Why buy it when you can build it? Well… most of the time you don’t have a choice. Other times it’s just way too much fun! In our first DIY (“Do It Yourself”) featured list we will focus on the production side of filmmaking. 10 Screenwriting Lessons You Can Learn from "The Graduate" For the foreseeable future, every Tuesday will be a Scriptshadow Secrets type breakdown of a great movie, giving you 10-12 screenwriting lessons from some of the best movies of all time. Today will be the first entry, “The Graduate.” Next week will be The Big Lewbowski. And going forward from there, I’ll be taking suggestions.

Row Three » Brave New Worldview – 30 Science Fiction Films of the 21st Century A decade into the 21st Century and we have arrived at the future. The promise of Tomorrow. But instead we have looming energy crises, endless middle east conflict and more disappointing, we have no flying cars, Heck, for all the bright and clean future promised in 2001: A Space Odyssey, none of the real companies used as brands in the film even exist anymore. Even moving from the late 1960s to the mid 1980s, nobody makes DeLoreans (although they occasionally sell on Ebay), but cloning and tablet computing (as promised by Star Trek: The Next Generation) have more or less come to pass in this century. It is not the gizmos or the distopian aesthetics, that have brought Science Fiction into the new millennium, but the questions it asks of people or society in a future time or place and how they reflect on our own times.

how to learn almost everything This is a guest post by Glen Allsopp of PluginID. Have you ever read an informative book, only to later remember just a few main points — if anything at all? The problem might be that you’re using one of the least efficient ways of learning available. The Cone of Learning I remember back about 7 years ago when I was taking music lessons at school, there was a poster on the wall that really grabbed my attention. To be fair, it wasn’t difficult for a random object to attract your gaze as our Scottish teacher at the time didn’t have much in the way of keeping you interested. Peter Bradshaw’s top 50 films of the demi-decade As far as actors are concerned, the first five years of the 2010s proved that you can’t make it big unless you’re prepared to get into the Lycra and stride around in front of the greenscreen. This has been the demi-decade of the superhero, coming alongside genres like sci-fi and fantasy. Perhaps it’s surprising that it didn’t happen long ago and that, until very recently, only three or four A-list superheroes were being consistently reinvented in franchise properties. Now there are dozens, with the Marvel stable a powerhouse of profitable movies. In the past five years, we have also seen the emergence of a recognisable new genre, young adult, drawn from colossal multi-volume bestsellers targeted at teens: these fanbases are formidably loyal, intelligent, opinionated, with a sense of self and identity; the product driven by social media.