The Best Movies That UK Netflix Has On Right Now. Ever sat down for a nice pleasant evening of Netflix-and-chilling – only to buckle under the pressure of choice? 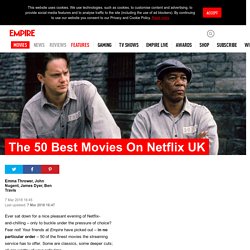 Fear not! Your friends at Empire have picked out – in no particular order – 50 of the finest movies the streaming service has to offer. Some are classics, some deeper cuts; all are worthy of your sofa time. Looper (2012) Before Rian Johnson found himself swept up in a galaxy far, far away, he directed this fiercely smart slice of science-fiction thrills, which pitted Joseph Gordon-Levitt as a young Bruce Willis, forced to kill his older self, played – yes! Read Empire’s review here.. Deadpool (2016) Marvel’s most meta mercenary finally got the film he deserved in 2016 — an inventively foul-mouthed origin story that rips apart superhero tropes in real time as you watch it. Read *Empire's review here. The Martian (2015) Matt Damon. Apartment, The original film poster * Movie Poster Studio 1962. Peter Bradshaw’s top 50 films of the demi-decade. As far as actors are concerned, the first five years of the 2010s proved that you can’t make it big unless you’re prepared to get into the Lycra and stride around in front of the greenscreen. 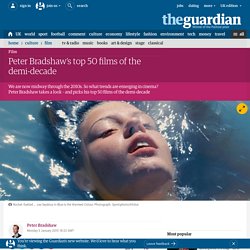 This has been the demi-decade of the superhero, coming alongside genres like sci-fi and fantasy. Perhaps it’s surprising that it didn’t happen long ago and that, until very recently, only three or four A-list superheroes were being consistently reinvented in franchise properties. Now there are dozens, with the Marvel stable a powerhouse of profitable movies. In the past five years, we have also seen the emergence of a recognisable new genre, young adult, drawn from colossal multi-volume bestsellers targeted at teens: these fanbases are formidably loyal, intelligent, opinionated, with a sense of self and identity; the product driven by social media. As far as international arthouse movie trends go, it’s difficult to tell. In Britain, there is a good deal to be happy about. The Headless Woman (dir. 100 Greatest Film Musicals by Digitaldreamdoor list. The Canon: 50 essential film musicals list. Top 10 Screenwriting Tips Introduction to Screenwriting How to become a screenwriter.

Over the last quarter century I’ve stumbled and lurched my way to some understanding of the screenwriter’s craft. 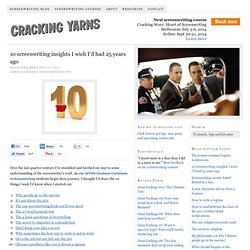 As our AFTRS Graduate Certificate of Screenwriting students begin their journey, I thought I’d share the 10 things I wish I’d know when I started out. 1. Why people go to the movies If you’re making films to be viewed by the cinema-going public, it would seem pretty obvious that you should seek to understand why people go the movies, wouldn’t it? Not to me. “What people are seeking is the feeling of being alive. They want to be moved, guys. Learn more about why people go to the movies 2. Most writers starting out think story is plot and when you ask them to tell you about their film they’ll go, “Well, this happens, and that happens, and then this other things happens, and oh, and I forgot to tell you, there’s this three-legged dog who can talk … “ However, once you understand that people want to be moved, you should realise that the main game in story is not plot. 3. 4. 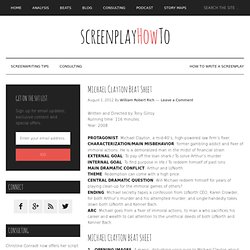 He is a demoralized man in the midst of financial strain.EXTERNAL GOAL: To pay off the loan shark / To solve Arthur’s murderINTERNAL GOAL: To find purpose in life / To redeem himself of past sinsMAIN DRAMATIC CONFLICT: Arthur and U/North.THEME: Redemption can come with a high price.CENTRAL DRAMATIC QUESTION: Will Michael redeem himself for years of playing clean-up for the immoral games of others? 10 Screenwriting Lessons You Can Learn from "The Graduate" For the foreseeable future, every Tuesday will be a Scriptshadow Secrets type breakdown of a great movie, giving you 10-12 screenwriting lessons from some of the best movies of all time. 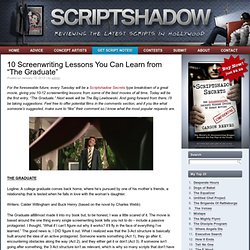 Today will be the first entry, “The Graduate.” Next week will be The Big Lewbowski. And going forward from there, I’ll be taking suggestions. Feel free to offer potential films in the comments section, and if you like what someone’s suggested, make sure to “like” their comment so I know what the most popular requests are. Logline: A college graduate comes back home, where he’s pursued by one of his mother’s friends, a relationship that is tested when he falls in love with the woman’s daughter. Writers: Calder Willingham and Buck Henry (based on the novel by Charles Webb) The Graduate allllllmost made it into my book but, to be honest, I was a little scared of it. 1) To quickly convey who your protagonist is, introduce them around people who are the opposite – This is an age-old trick and it never fails.