Anjana Sukhani. Sunil Grover. Coffee With D 2017. Latest News. Latest News. Varun Dhawan and Alia Bhatt feel like a home in Rajasthan and close to their heart, having spent a lot of time shooting in Jaipur and Kota. 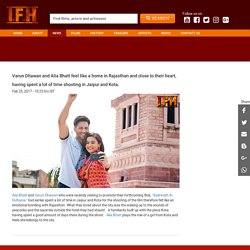 Feb 25, 2017 - 10:23 hrs IST Alia Bhatt and Varun Dhawan who were recently visiting to promote their forthcoming flick, ‘ Badrinath Ki Dulhania ’ had earlier spent a lot of time in Jaipur and Kota for the shooting of the film therefore felt like an emotional bonding with Rajasthan. Latest News. Latest News. Rishi Kapoor the superstar of all times and a veteran in the film industry seems to be enjoying his second innings in the films and has got a chance to act and win awards on merit . 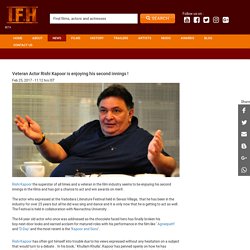 The actor who expressed at the Vadodara Literature Festival held in Sevasi Village, that he has been in the industry for over 25 years but all he did was sing and dance and it is only now that he is getting to act as well . Latest News. The National Award Winning Actress was disappointed that some of her main scenes from the film, ‘Rangoon’ have been edited by the makers and the actress felt so broken . 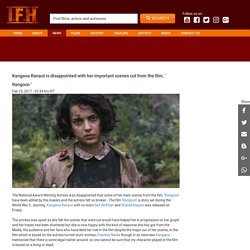 The film ‘Rangoon’ is story set during the World War II , starring Kangana Ranaut with co-stars Saif Ali Khan and Shahid Kapoor was released on Friday . Latest News. Latest News. The svelte actress Shilpa Shetty has been made the Brand Ambassador for the Modi Government’s cleanliness initiative mission called the ‘ Swachh Bharat’. 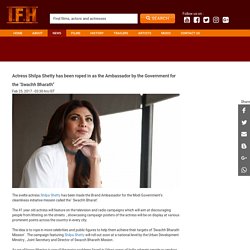 The 41 year old actress will feature on the television and radio campaigns which will aim at discouraging people from littering on the streets , showcasing campaign posters of the actress will be on display at various prominent points across the country in every city. The idea is to rope in more celebrities and public figures to help them achieve their targets of ‘Swachh Bharath Mission’ . The campaign featuring Shilpa Shetty will roll out soon at a national level by the Urban Development Ministry , Joint Secretary and Director of Swacch Bharath Mission . As we all know littering is one of the major problems faced in Urban areas of India wherein people or vendors or shopkeepers do not use a bin to throw a waste. Latest News. Hansal Mehta, the Film Director in his tweet, was all praises for the beautiful actress Kangana Ranaut for her unique talent. 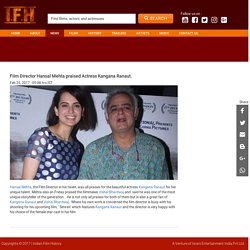 Mehta also on Friday praised the filmmaker Vishal Bhardwaj and said he was one of the most unique storyteller of the generation . He is not only all praises for both of them but is also a great fan of Kangana Ranaut and Vishal Bhardwaj . Latest News. Film director Vishal Bhardwaj who is known for creating unique stories , has once again created a realistic film that explores on the term love during the revolution period in the film, “Rangoon ”, a film which is set during the pre-Independent Era in the early 1940’s. 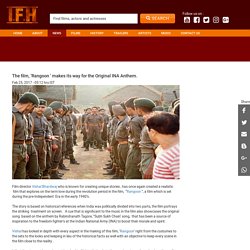 Latest News. Sudhir Mishra the director of the film, ‘ Dharavi ’ which has bagged the National Award in the year 1992 for the Best Feature Film in Hindi . 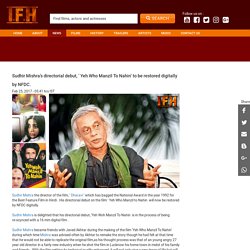 His directorial debut on the film ‘ Yeh Who Manzil to Nahin will now be restored by NFDC digitally. Sudhir Mishra is delighted that his directorial debut, 'Yeh Woh Manzil To Nahin is in the process of being re-scynced with a 16 mm digital film . Sudhir Mishra became friends with Javed Akhtar during the making of the film ‘Yeh Who Manzil To Nahin’ during which time Mishra was advised often by Akhtar to remake the story though he had felt at that time that he would not be able to replicate the original film,as his thought process was that of an young angry 27 year old director in a fairly new industry when he shot the film in Lucknow his home town in midst of his family and friends .

With the film getting its technical quality enhanced, it will not only give a new lease of life but will also be on Television, DVDs and go digital . Latest News. The nominations are out for the Oscars Academy Awards 2017 and this year it’s a great prestige that we have an Indian Actor Deven Patel of the Slumdog Millionaire fame, being nominated in the supporting actor category who had left a mark with his performance as Lion. . 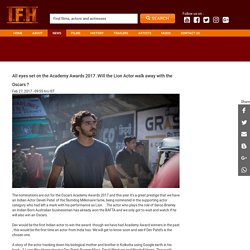 The actor who plays the role of Saroo Brierley an Indian Born Australian businessman has already won the BAFTA and we only got to wait and watch if he will also win an Oscars. Dev would be the first Indian actor to win the award though we have had Academy Award winners in the past , this would be the first time an actor from India has. We will get to know soon and see if Dev Patel’s is the chosen one. Latest News. Latest News. Latest News. We have heard Salman Khan crooning in his voice for the film, ‘ Hangover’ and ‘Hero’, and Khan is all set to turn to a singer once again. 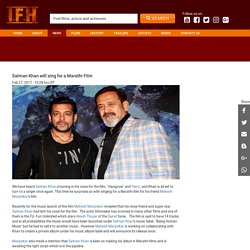 This time he surprises us with singing for a Marathi film for his friend Mahesh Manjrekar’s film . Latest News. Swara Bhaskar has been the talk of the town since the release of the first poster of her forthcoming film, Anaarkali of Aarah, produced by Priya and Sandiip Kapur, starring her along with Sanjay Mishra, Pankaj Tripathi and Ishtiaq Khan among others, directed by Avinash Das under the banner Promodome Motion Pictures is scheduled to release on March 24 The scintillating poster featuring Swara sporting a multi-colour lehenga created a huge buzz among the viewers who couldn’t stop praising her bold avatar! 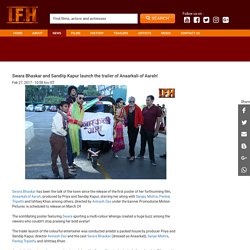 Latest News. Sahiba Song Lyrics Movie: PhillauriSinger : Romy , Pawni PandeyLyricist : Anvita DuttMusic Director : Shashwat Sachdev. Latest News. Reports say that Rohit Shetty the director of the genre films had offered a role to the beautiful actress Tabu for his four installment of the famous Golmaal series. The actress who had initially agreed to be a part of the film had turned down the offer . She was approached earlier by the same director for his previous film and the actress had not accepted the offers then too.

Tabu is known for her choice of films and her portrayal in unconventional roles. Latest News. Despite the ban on Pakistani artists in India, or the unofficial ban which remains unchanged , Mahesh Bhatt is said to have called the singer-actor Ali Zafar in Karachi offering him to sing a song that is based on a cross-border peace . While Ali has agreed and Bhatt is clearly making it obvious he will have his way come what may. Imran Zahid who is currently working with Mahesh Bhatt says every Pakistani actor that Bhatt has approached have responded positive enthusiasm . Shafqat Amanat Ali has agreed to contribute a song to Mahesh Bhatt’s film says he doesn’t want any money for this song .

In the mean time Bhatt is trying to get Rahat Fateh Ali Khan and Atif Aslam on board as well. Bhatt is not new to controversies or protests and he will deal with the oppositions , therefore he says there is a need to start a dialogue with Pakistan on a cultural level. Latest News. Following Sunday is much to look forward on the very popular talk show , Koffee with Karan by Karan Johar. The promos reveal Kapil Sharma of the Comedy Nights to be the guest of honour at the Talk show which is said to be an absolutely laugh-a-riot. In fact the episode turned out to be so good, that this episode is considered to be one of the best and will be taken as the Grand finale of this season.

Latest News. Sanjay Dutt was seen at Taj Mahal in Agra celebrating his wedding anniversary with his family. Latest News. Latest News. Vikramaditya Motwane says he decided to make Trapped because he wanted to take a risk as a filmmaker and did not want to confine his directorial abilities. Vikramaditya Motwane did not want to restrict his directorial abilities and is willing to take a risk on directing the film , ‘Trapped’ a survival drama thriller played by Rajkummar Rao. Latest News. Dil Aur Patthar 1977. Bhakti Mein Shakti 1978. Beshaque 1981. Baawri 1982. Zamaane Ko Dikhana Hai 1982. Yeh Ishq Nahin Aasaan 1983. Raaj Tilak 1984.

Laila 1984. Enemmy 2013. Yogita Bali. Yogeeta Bali was active in films, from late 1960 to the 1970. Yogeeta Bali is remembered for one of her most enjoyable performances and a memorable one for her film ‘Biwi-O-Biwi” starring opposite to Sanjeev Kumar. She retired from films permanently after she married Mithun Chakraborty to start a family. Deewaar 2004. Haaledil 2008. Toonpur Ka Super Hero 2010. Pitruroon 2013. Zaakol 1980. Tanuja. Tanuja was born in a Maharashtrian family of film line. She has three sisters including the actress Nutan. Her Grandmother RattanBai and Nalini Jaywant were also actresses. Tanuja's parents Kumarsen Samarth and Shobhna Samarth parted ways and she was linked with Motilal for many years. Shobhana produced debut films for Tanuja and her older sister Nutan. Her two other sisters Chatura an artist and Reshma who didn't take up in films. she has one brother Jaideep who is also not in the film line. Tanuja married filmmaker Shomu Mukherjee in 1973 and has two daughters both actresses , Kajol and Tanisha.