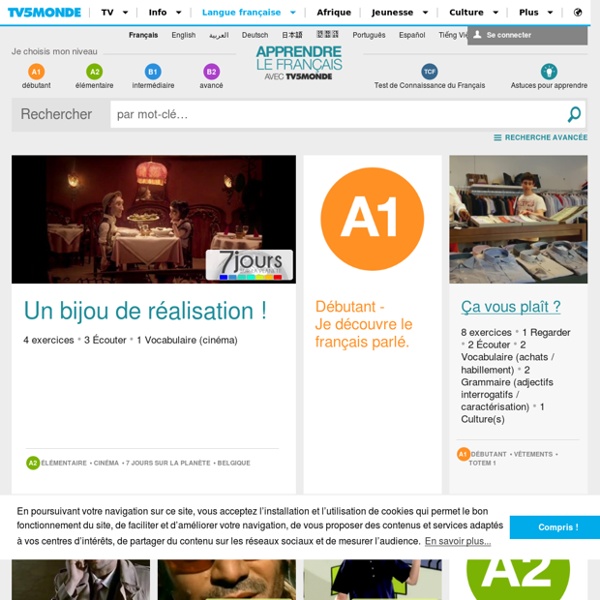 Learn French Online Learn French for Free French Vocabulary by Theme Greetings, Alphabet, Numbers, Food, Time, Videos with Ratounet...Many exercises and games, all the vocabulary comes with audio files to improve your pronunciation in French. French Grammar French Grammar may be easy to understand when it is explaining clearly taking into account your basic knowledge. Many Video files with correct French accent. French Method Teaching Foreign Languages K-12: A Library of Classroom Practices 1. Introduction to the Library This program provides an overview of the entire library, with suggestions for use in professional development settings. Go to this unit.

Basic French – Learn French Online Course Description French is spoken by millions of people in many countries around the world and is a very popular second language to learn. ALISON's free online course is a series of engaging video lessons for beginners that introduces the learner to various aspects of the French language including basic French vocabulary and grammar. 25 Best Sites for Free Educational Videos RefSeek's guide to the 25 best online resources for finding free educational videos. With the exception of BrainPOP and Cosmeo, all listed sites offer their extensive video libraries for free and without registration. Academic Earth Why I taught myself 20 languages — and what I learned about myself in the process During the past few years, I’ve been referred to in the media as “The World’s Youngest Hyperpolyglot” — a word that sounds like a rare illness. In a way it is: it describes someone who speaks a particularly large number of foreign languages, someone whose all-consuming passion for words and systems can lead them to spend many long hours alone with a grammar book. But while it’s true that I can speak in 20 different languages, including English, it took me a while to understand that there’s more to language than bartering over kebabs in Arabic or ordering from a menu in Hindi. Fluency is another craft altogether.

Teaching Foreign Languages K-12 Workshop Workshop 1. Meaningful Interpretation This session looks at how the interpretation of texts (including documents, paintings, movies, audio recordings, and more) can go beyond literal comprehension and tap into students' background knowledge while fostering critical-thinking skills. Go to this unit. Workshop 2. Person to Person Focusing on interpersonal communication, session participants discuss how students use language to make themselves understood and to understand others.

The 13 Best Youtube Channels to Learn French According to a study by PhD graduate Paul Sulzberger from Victoria University, listening to a language is one of the most efficient ways to learn it. To do that, you could listen to a podcast, watch French TV or watch French movies. Or you could go to Youtube and learn French with one of the Youtube channels I selected for you. Whether you’re a beginner, intermediate or advanced French learners, there is a Youtube channel for you here! The Best Youtube Channels for beginner French learners

Travel - Why the French don’t show excitement When I was 19 years old, after five years of back-and-forth trips that grew longer each time, I finally relocated officially from the United States to France. Already armed with a fairly good grasp of the language, I was convinced that I would soon assimilate into French culture. Of course, I was wrong.

HiltingburyFrench - Year 6 Skip to main content Create interactive lessons using any digital content including wikis with our free sister product TES Teach. Get it on the web or iPad! guest Join | Help | Sign In HiltingburyFrench Home Oui In France The strange noises French people make The beautiful French language — the language of love, charm and unimaginable frustration when you set out to learn it. Oh, and it’s the language of strange sounds that will leave you scratching your head. If you’ve spent any time in France or around French people, you might have noticed some of these strange noises that French people make that aren’t commonplace in the English language. And no, I’m not talking about the French “R”! I’m referring to mannerisms, linguistic tics and noises that aren’t part of actual words.

Articles for complete beginners in French (Fle A1) "You have been a fantastic teacher and a friend. My move to France would have been positively awful had I not had such a wonderful tuition by you. You are truly an energetic, interesting person who makes people at ease and comfortable in your company. Thank you for everything, Nikki. (Nikki's own website to help you to move to France; "Vanessa is an excellent teacher who makes lessons interesting and fun. The Best French Movies to Improve Your Understanding Watching movies in their original format (without dubbing) has proven to be a remarkably fun and effective way to improve your foreign language skills. We’ve written before on the best movies to watch for learning Spanish. So many people requested a similar list for French that we decided to come up with our top 5 movies that will help you learn.

10 Emotions That Can Only Be Explained in French Franz Lang / © Culture Trip Add travel ideas to a Plan and see them on a map Got it! French is a romantic language that seduces the heart like none other, so there’s no surprise it’s enriched with a wealth of words describing emotions that are tricky to articulate. Here are some of the most poignant examples. Dépaysement Primary French Resources Animals Adjectival Agreement Colours Countries Family Food Games Gender Greetings Intercultural Understanding In town Jobs Miscellaneous Months and days Monolingual dictionaries Numbers Opinions Parts of the body and monsters Phonics Planets Playground games and pastimes Plurals with Matisse Reading texts Saying your age and birthday Scheme of Work School Time Transport Verbs Weather and points of the compass Where do you live? Word mats Sound files (vocabulary, rhymes, songs and listening activities) KS2 Scheme of Work Greetings