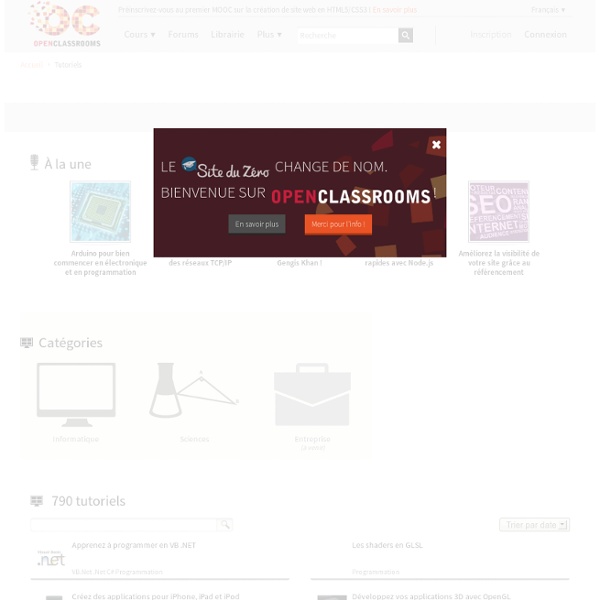 Tutorom HTML 5 : Les fondamentaux Course Online "VTC" refers to Virtual Training Company, Inc. "You" refers to the user or subscriber. "Software" refers to the VTC training content and software. Interface (Java) One benefit of using interfaces is that they simulate multiple inheritance. All classes in Java must have exactly one base class, the only exception being java.lang.Object (the root class of the Java type system); multiple inheritance of classes is not allowed. A Java class may implement, and an interface may extend, any number of interfaces; however an interface may not implement an interface.

TUTORIAL Ways to embed a Clickable SVG-Logo into Your Website With the growing number of screen resolutions, devices that support an internet connection (desktop computer, laptops, but also tablets, mobile, TVs, and even your fridge someday), flexibility and scalability has become more and more important for websites. With the new arrival of the Macbook Pro Retina, this went a step further and brought an HiDPI display that was unknown to the market. Jump into Game Development with the Tower Defense Genre - Dave Bost A common dream of most developers is to develop a game. Game development can be very intimidating to jump into straight away. The hardest decision is to determine what kind of game you’re going to create – what’s the backstory, who are the actors, what’s their purpose, what does success look like, and so on. Once you determine what game you’re going to make, you next need to determine how you’re going to go about making that game. There are certainly a wide array of technologies and game engines that are well suited for certain kinds of games. The decision can be limited based on where you’d like to play that game.

CSS2 - The display declaration Page last changed today The display property lets you define how a certain HTML element should be displayed. display: block display: block means that the element is displayed as a block, as paragraphs and headers have always been. A block has some whitespace above and below it and tolerates no HTML elements next to it, except when ordered otherwise (by adding a float declaration to another element, for instance). Live example: Java (programming language) Duke, the Java mascot Sun Microsystems released the first public implementation as Java 1.0 in 1995.[1] It promised "Write Once, Run Anywhere" (WORA), providing no-cost run-times on popular platforms. Fairly secure and featuring configurable security, it allowed network- and file-access restrictions. Major web browsers soon incorporated the ability to run Java applets within web pages, and Java quickly became popular. With the advent of Java 2 (released initially as J2SE 1.2 in December 1998 – 1999), new versions had multiple configurations built for different types of platforms.

Awesome GIMP tutorial websites you shouldn’t miss GIMP is a free and open-source image editing tool. With a large community of open-source admirers, it is no secret that GIMP is growing in popularity at an astonishing rate. GIMP is bundled by default on many Linux distros. With sufficient plugins, brushes and scripts, GIMP can become very powerful. Of course, you need to know how to use GIMP well. An intro to modern OpenGL. Chapter 2.2: Shaders An intro to modern OpenGL. Chapter 2.2: Shaders updated April 5, 2010 17:29:36 PDT « Chapter 2.1 | Table of Contents | Chapter 2.3 » Buffers and textures contain the raw materials for an OpenGL program, but without shaders, they are inert lumps of bytes.