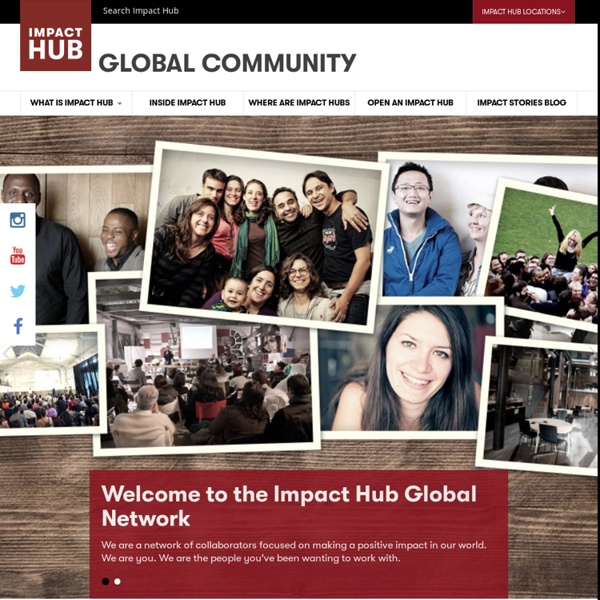 The World’s Top Ten Social Networks Social Networking has become a global phenomenon over the past 8 years and continues to grow year on year. So we’ve all heard of the big players like Twitter and Facebook, but there are thousands of Social Networking sites out there, many of which have been left by the wayside since the introduction of Facebook. Let’s take a look at the top ten Social Networks of 2011. In the Collaborative Economy, the Crowd Has Built a Car What if I told you the next affordable, long-range, fuel-efficient vehicle might be assembled in your garage or built by your neighbors? That's what I was surprised to hear when I learned about the Wikispeed auto project. Above Image: The orange Wikispeed SGT01 Roadster: crowd-funded, crowd-designed, crowd-produced, hitting the streets in small batches now for $25k, oh, and it gets 100 miles per gallon. Wikispeed is a business that crowdsourced designs, production, development, and has created a SAE-registered, road-legal-approved car, the Wikispeed SGT01 Car, now on sale in limited quantities.

Ashoka - Innovadores para el Público Through a three-step process—frame, convene, ignite—Ashoka Changemakers works with the rest of Ashoka and its partners to exponentially accelerate lasting social change so it sweeps through systems, tipping the attitudes and behavior of individuals and institutions. It convenes and connects high-potential changemakers, their ideas and their resources, through the power of collaborative competitions and partner networks. Changemakers builds on Ashoka's three-decade history to build a global network that embodies the Ashoka vision of an “Everyone a Changemaker” world, where people gain the skills and resources they need to collaborate on solving complex social problems. Galaxy : Built with Processing Recommended Version 7 Update 55 Select the file according to your operating system from the list below to get the latest Java for your computer. By downloading Java you acknowledge that you have read and accepted the terms of the end user license agreement <p><span class="termhighlight">In order to optimize your experience and provide you with accurate messages, please enable javascript in your browser for the duration of your Java installation.</span></p> What is Java? Java allows you to play online games, chat with people around the world, calculate your mortgage interest, and view images in 3D, just to name a few.

The 8 Steps To Creating A Great Storyboard [Editor’s note: This is the fourth in a series of seven posts on running your own Google Ventures design sprint. Read the first part here, the second here, and the third here.] At the Google Ventures Design Studio, we have a five-day process for taking a product or feature from design through prototyping and testing. We call it a product design sprint. In the first two days of the sprint, we’ve learned about the problem, shared a lot of knowledge, and chosen the challenge we want to tackle in this sprint. It’s time to start cranking out solutions. 12 Gadgets to Survive the Apocalypse Now is a good time to ponder the apocalypse. Iran and North Korea are going nuclear, the wonky weather is a harbinger of catastrophic climate change, and end-of-the-world blockbusters abound. (Tim Burton's '9' came out last week and '2012,' 'The Road,' and 'Zombieland' are all coming up later this fall.) In that dismal spirit, the Switched team has gathered its first choices for last-chance gadgetry -- a collection of 12 must-haves if society is in peril, whether it be by fire or ice, zombies or aliens. Using our handy "What Type of Apocalypse Will It Be?"

What A Detroit Supper Club Teaches Us About Co-Creativity A social movement is underway in downtown Detroit. Each month, 100 or so individuals pay $5 for admission to a loft, where they eat a dinner of organic soup (and other foods) prepared by volunteers. Diners share ideas and connections, hear presentations from artists who are working on projects aimed at improving the city, and then vote on which project will receive proceeds from the evening's dinner. Detroit SOUP organizers call the gathering "a democratic experiment in micro-funding," but it’s much more than that: It’s an example of the power of co-creativity, and it represents the way forward for organizations that want to remain relevant and reach consumers in an authentic way. In recent years, crowdsourcing has become a trendy tactic for soliciting input and engaging consumers, but in reality this approach is nothing more than an open call for submissions. Yesterday, businesses succeeded through industrial or technological expertise, with little need to converse with consumers.

Five Reasons Why Your Mission Statement Probably Stinks I can probably count on one hand the number of great company mission statements I've seen in my over two decades in marketing. While most business owners have been told that they need to have a mission statement, not everyone has been instructed on how to create one that's useful and meaningful. By definition, a mission statement communicates the fundamental purpose and values of a business or organization.

HOW TO: Stay Competitive in a World of Online Price Transparency Langley Steinert is the CEO/founder of CarGurus, a leading online automotive community which provides price transparency tools for car shopping. Previously, Steinert was chairman/co-founder of TripAdvisor, the largest online travel community in the world. Prior to TripAdvsior, Steinert was VP of marketing at Viaweb (acquired by Yahoo!).

IdeaPaint Buy Now We exist for one simple reason: to fundamentally improve the way people work. IdeaPaint was born from this very notion, a frustration with the way ideas were shared and coworkers collaborated. How can you think big when you write small? How can you harness the collective intelligence when it's awkward to share what's inside your own head? How can you think on your feet when you're sitting on your hands?