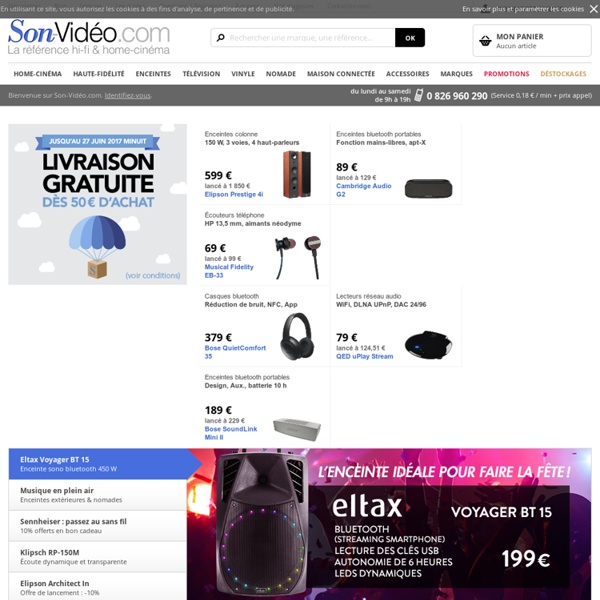 A Year Ago, The European Supreme Court Appears To Have Ruled The Whole Web To Be In The Public Domain, And Nobody Noticed - Falkvinge on Infopolicy Copyright Monopoly – Rick Falkvinge On February 13, 2014, the European Court of Justice – the Supreme Court of the European Union – appears to have ruled that anything published on the web may be re-published freely by anybody else. The case concerned linking, but the court went beyond linking in its ruling. This case has not really been noticed, nor have its effects been absorbed by the community at large. It was a little-known ruling about hyperlinking. Musique et cinéma dans toutes les pièces de la maison Rue du Tee Shirt. t shirts originaux. Tee-shirt homme RueDuTeeShirt.com Boutique communautaire de tee shirts originaux,sweat shirts et autres vêtements imprimés par nos soins en France. Mon panier 0 ARTICLE(S) Mon compte

Le Réseau des intégrateurs audiovisuels sur mesure Disque dur externe, accessoire iPhone, iPod et iPad, disque dur interne, mémoire 4 keys to success for LibreOffice as a service The announcement of LibreOffice Online this week came as welcome news to many people concerned about the paucity of online options for those who want software freedom with their online document solutions. But can open source SaaS succeed? The open source community needs a truly open alternative to current mainstream online document collaboration solutions, all of which are compromised by lock-in. LibreOffice Online will offer the full flexibility to deploy in-house or hosted cloud instances while using true open standards for its documents. Moreover, the rich capabilities of LibreOffice -- which include support for the enterprise content management interface CMIS and cloud storage -- mean the offering can rapidly mature and adapt to changing enterprise conditions. Contributions will be needed to package the software for various delivery formats, but there’s a good chance the work will attract multiple contributors wanting to escape the tentacles of Microsoft and Google.

Magical Chrome extension puts tabs to sleep so they don't kill your browser People are loyal to their web browsers, and Google Chrome is certainly one with a dedicated following. But one of users' biggest gripes with Chrome is its tendency to suck memory and slow down computers when tabs are left open. A new Chrome extension fixes this by temporarily suspending any tabs you're not using. You can even install it in less time than it takes to say Where has this been all my life 10 times. The Great Suspender lets you manage when tabs should be put "to sleep" — anywhere from 20 seconds to three days. This means you can keep your email and 30 other tabs open in the background without slowing down your system, and then access those tabs again at any point.

Google IDs are creeping into your identity management With Android 5.0 Lollipop now available for most widely used Android smartphones and tablets, you can now manage those devices at a higher level of security, via Android for Work. Google uses Google accounts as the mechanism for applying discrete policies to content and applications on Android. But doing so also requires that both the users and IT itself have Google accounts, which starts to make Google accounts part of your identity management equation -- even if you are trying to centralize on Microsoft's Active Directory or similar systems. That's not necessarily bad, but it is a new wrinkle in the larger issue of identity management at enterprises, which is also evolving beyond single sign-on, the reason most IT organizations use it. Active Directory broadens its reach

24 Google Docs Templates that Will Make Your Life Easier Too much time can easily be wasted trying to format documents that have already been put together by someone else. If you use Google Docs, here are 24 time-saving templates that’ll let you get on with using the documents, rather than struggling with putting them together in the first place. The templates below have been split into four sections; work, health, home, and travel, so feel free to scroll to the section that’s most relevant to you. If you have any other Google Docs templates that you regularly use, please share these in the comments. Work Resumé

Review: Email encryption has gotten so much better, you’d be crazy not to use it I once co-wrote a book on enterprise email where I likened email encryption to a “sucking chest wound.” That was in 1997, when you had to do all the encryption key management on your own, a daunting task to say the least. While things have improved considerably since then, encrypting messages is not as simple as it could be, and requires careful study if you want to have truly private communications that can’t be viewed by your competitors – or your government. In the past, recipients of encrypted emails had to share the same system as the sender, and many email clients were difficult to configure.

Review: VirtualBox 5.0 vs. VMware Workstation 11 Oracle VirtualBox and VMware Workstation have been duking it out for several years now. VirtualBox occupies the “free and open source” corner of the ring, while VMware Workstation is a proprietary commercial application. For the price, Workstation has generally led in features and performance, while also providing close integrations with the rest of the VMware virtualization line. Fundamentally, though, the two products are quite similar. Both run on Windows or Linux hosts, and both support a broad range of Windows, Linux, and Unix guests. (VirtualBox also runs on OS X, whereas VMware offers Fusion for Macs.)

How to Search in Google: 31 Advanced Google Search Tips If you’re like me, you probably use Google many times a day. But chances are, unless you're a technology geek, you probably still use Google in its simplest form. If your current use of Google is limited to typing in a few words and changing your query until you find what you’re looking for, then I’m here to tell you that there’s a better way -- and it’s not hard to learn. On the other hand, even if you are a technology geek and can use Google like the best of them already, I still suggest you bookmark this article of advanced Google search tips. Then, you’ll then have the tips on hand when you're ready to pull your hair out in frustration watching a neophyte repeatedly type in basic queries in a desperate attempt to find something.