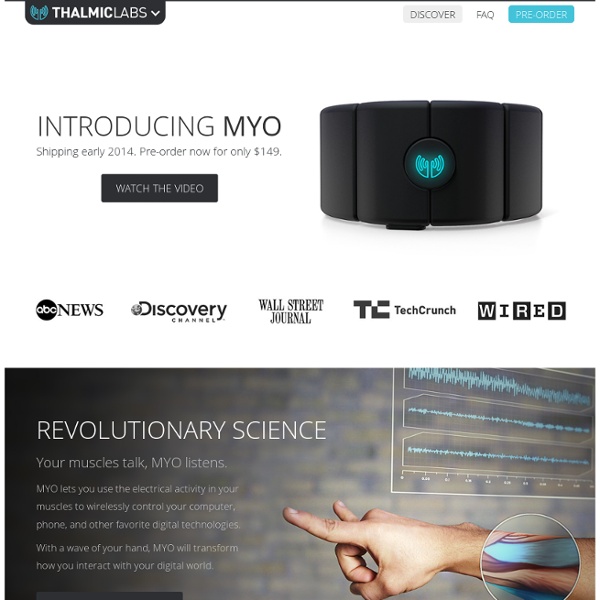 MCDPEL Innovations Lab *Global #EdCampLdr 2015* The Mid-Career Doctoral Program in Educational Leadership will sponsor EdCamp Leadership (@edcampldr) for the 3rd year in a row on MONDAY, JULY 13, 2015. This year's event encourages other locations around the country to co-host their own #edcampldr to maximize the hashtag and collaborative session facilitation across time zones. Squeezing into OMsignal's smart shirt of the future Thanksgiving is a time to remember things to be grateful for, stuff yourself with turkey and watch MST3k re-runs. But what happens the following day, when you wake up with a meat hangover that could kill a horse? That's the moment you'll stumble online, looking for new ways to lose weight and find OMsignal's biometric smart shirt. The fashionable piece is a sports-style compression garment that monitors your breathing, heart rate and step count, so I know that as I write this, I'm taking 18 breaths a minute and my heart is beating 76 times every 60 seconds.

Boost for grassroots education Kristen A. Graham, Inquirer Staff Writer Posted: Monday, August 17, 2015, 1:07 AM The XOO Belt Which Charges A Smartphone Joins With Iconic UK Fashion House Nifty, a hardware startup which has previously turned heads which it’s clever SD card (the MiniDrive) designed to expand the memory of ultra books like Macbook Air’s, has come up with a new product. The XOO Belt is a designer belt that will charge a smartphone. Launched recently on IndieGoGo, it packs 2,100mAh of power – enough to fully charge an iPhone 6 with power to spare. The XOO Belt has multiple overlapping layers of high-capacity flexible battery woven inside the full-grain leather and features polished zinc buckles and a ratchet mechanism for adjustment. It’s design is what you might call unisex. The charging cable that works with both iPhone and Android phones is hidden behind the leather strap, magnetically held in place.

Gamification About the Course Gamification is the application of digital game design techniques to non-game contexts, such as business, education, and social impact challenges. Video games are the dominant entertainment form of modern times because they powerfully motivate behavior. Game mechanics can be applied outside the immersive environments of games themselves, to create engaging experiences as well as assign rewards and recognition.

edCamp Milwaukee 2014 Tickets, South Milwaukee Invalid quantity. Please enter a quantity of 1 or more. The quantity you chose exceeds the quantity available. Please enter your name. Please enter an email address. Students Assessing Me About a week ago, Annabelle Howard, someone I follow on Google+, wrote a post about allowing your students to assess you as a teacher. The post and discussion that followed can be found here. I thought this would be great since, now that my district will be using GAFE, this could be done easily and often through Forms. Here is a link to what I came up with. SmartBlog on Education - Building a positive school culture by @thomascmurray - SmartBrief, Inc. SmartBlogs SmartBlogs Schools around the country are being cleaned, waxed, and made to look their best in preparation for another year. It’s about this time when principals begin planning for the new year. Data is analyzed, goals are formed, schedules reworked, communication to parents planned, etc.

#EdCampMADWI: Pulling up the Stakes I've been to EdCamp before and have been blown away each time. Such was the case at my most recent EdCamp experience at #EdCampMadWI this past Saturday. With a sunny, snowy Sunday and some calming tea, it's time to pull up the stakes on #EdCampMadWI and choose a next course of action: Get one in my own backyard. From BLAH... to TAH-DAH! Go "EdCamping" for Your Staff's Next PD Day! Inspired by Knapp Elementary Principal, Joe Mazza (@Joe_Mazza) and the increasing numbers of "edcamp un-conferences" happening around the world, we shifted the "professional learning paradigm" at our high school recently. True confession: I have not attended an EdCamp myself. I have followed several of them through the Twitter hash tag world, however, and I have officially registered for my first - #EdCampKC in November. For a traditional professional development junkie like myself, I consider it a substantial change for me and our school. It was strange to release the control for our staff's learning almost completely. I referred to Mr.

EdCampCT Reflections and Resources EdcampCT 2012 was held this past Friday at the Ethel Walker School in Simsbury, CT. Hats off to the planning/hosting team for another great event. And, of course, hats off to the food service team for the awesome lunch and those incredible homemade potato chips! For those who don't know, Edcamp is a great series of free, unconferences for educators. The Edcamp model is unique in that attendees set the agenda the morning of the conference and the sessions are not led by one person, but are rather a collaboration of both the facilitator and attendees. It is a great way to learn, share, and connect with other educators.

For Edcamp Newbies Yesterday, with the support of SGEI and Kean University, where I work, I hosted edcamp Common Core. The idea was to gather NJ educators to discuss a common theme. Here’s what I heard from attendees in the morning before we shared opening remarks in the auditorium: Why weren’t the sessions posted ahead of time?