US of A in Control 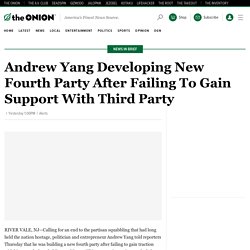 “This country is moving too far left, too far right, and too far forward, which is why I’m proud to announce the Breakthrough Party,” said the former presidential candidate, urging voters who were fed up with the Democratic Party, Republican Party, and Forward Party to join him in his new venture to return sanity to American politics in a way even his own third party had not.

“My experience founding the Forward Party over these past few weeks tells me we need a fourth way; a way that can make meaningful progress on issues Americans care about, rather than spouting platitudes like our three major parties. New Texas Law Allows Private Citizens To Hold Pregnant Women Hostage Until Birth. AUSTIN, TX—In an ongoing effort to completely eliminate the right to an abortion in the state, the Texas Legislature passed a new law Thursday that allows private citizens to kidnap and detain any pregnant woman or girl until she reaches full term and gives birth. 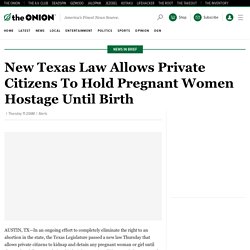 “The sanctity of life can only be preserved when every Texan is empowered to seize childbearing females off the street, place them in the back of a van, and drive them to an undisclosed location where they can be held against their will for the duration of their pregnancy,” Gov. America's overreaction syndrome. The events of Jan. 6, 2021 — a president using a series of lies to incite a violent insurrection against Congress as it was attempting to certify the results of a free and fair presidential election — were a very big deal. 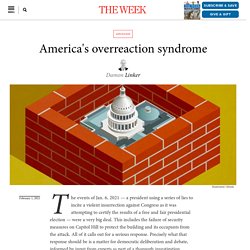 This includes the failure of security measures on Capitol Hill to protect the building and its occupants from the attack. All of it calls out for a serious response. Precisely what that response should be is a matter for democratic deliberation and debate, informed by input from experts as part of a thorough investigation. But you know what is not a serious response? A proposal, made last week by the acting chief of the U.S. The reaction of lawmakers from both parties, as well as that of Washington, D.C., Mayor Muriel Bowser, was quite negative.

Yet the sad fact is that this is exactly the kind of response one might expect from the government of the United States, which has a record by now of wild and irrational overreaction to getting caught with its pants down. Your-Rights-Rules-on-Board. Greyhound tells passengers how to push back when Border Patrol comes on board. Splinternews. Obama AG nominee Loretta Lynch quietly dropped $450,000 civil forfeiture case a week before hearings. Loretta Lynch, nominee for US Attorney General, attends a meeting with US Senator Chuck Schumer, Democrat of New York, on Capitol Hill in Washington, DC, December 2, 2014. 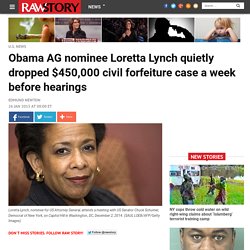 (SAUL LOEB/AFP/Getty Images) Lynch’s office described as ‘major forfeiture operation;’ seized $113 million in two years When Long Island businessman Jeff Hirsch stepped up to the bank window to make a deposit one morning in May, 2012, the teller shot him a worried look. America's Decay Into a Violent, Cruel Place. December 17, 2014 | Like this article? 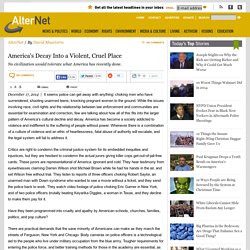 Join our email list: Stay up to date with the latest headlines via email. It seems police can get away with anything: choking men who have surrendered; shooting unarmed teens; knocking pregnant women to the ground. While the issues involving race, civil rights and the relationship between law enforcement and communities are essential for examination and correction, few are talking about how all of this fits into the larger pattern of America’s cultural decline and decay.

Revolution vs. Rationalization: The Militarization of the Police and The Death of Rebellion. DonkeyHotey (CC by-sa 2.0) [Editor's note: For future reference, Willis Gordon will be running a column on Disinfo.com: "Photobombing Salman Rushdie. 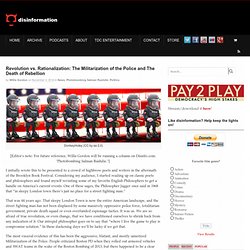 "] I initially wrote this to be presented to a crowd of highbrow poets and writers in the aftermath of the Brooklyn Book Festival. Considering my audience, I started reading up on classic poets and philosophers and found myself revisiting some of my favorite English Philosophers to get a handle on America’s current events. One of these sages, the Philosopher Jagger once said in 1968 that “in sleepy London town there’s just no place for a street fighting man.” From Imperial Presidency to Double Government. In the wake of US attacks on ISIS elements in Syria, the continuity in US national security policy has become ever more apparent. 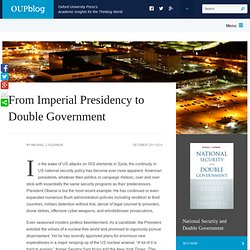 American presidents, whatever their politics or campaign rhetoric, over and over stick with essentially the same security programs as their predecessors. President Obama is but the most recent example. He has continued or even expanded numerous Bush administration policies including rendition to third countries, military detention without trial, denial of legal counsel to prisoners, drone strikes, offensive cyber-weapons, and whistleblower prosecutions. Minneapolis Military Drills Based Around “Confrontation Scenarios” : DHS and DARPA to Work on New Generation of Airport Security Technology :