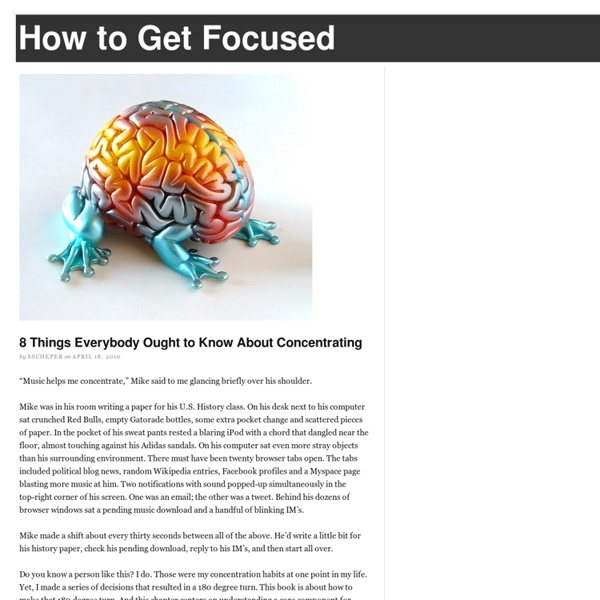 “Music helps me concentrate,” Mike said to me glancing briefly over his shoulder. Mike was in his room writing a paper for his U.S. History class. On his desk next to his computer sat crunched Red Bulls, empty Gatorade bottles, some extra pocket change and scattered pieces of paper. In the pocket of his sweat pants rested a blaring iPod with a chord that dangled near the floor, almost touching against his Adidas sandals. On his computer sat even more stray objects than his surrounding environment. Mike made a shift about every thirty seconds between all of the above. Do you know a person like this? The Science Behind Concentration In the above account, Mike’s obviously stuck in a routine that many of us may have found ourselves in, yet in the moment we feel it’s almost an impossible routine to get out of. When we constantly multitask to get things done, we’re not multitasking, we’re rapidly shifting our attention. Phase 1: Blood Rush Alert Phase 2: Find and Execute Phase 3: Disengagement

15 Honest Questions The Person You Marry Should Be Able To Answer Marriage really is a beautiful thing. I used to think it was a bit pointless, just a piece of paper that allows you an extra tax cut. However, the more I thought about it, the more I learned to appreciate what marriage could be. 10 Golden Lessons from Albert Einstein Every day I remind myself that my inner and outer life are based on the labors of other men, living and dead, and that I must exert myself in order to give in the same measure as I have received and am still receiving - Albert Einstein Albert Einstein was an amazing physicist. He figured out so many universal principles and equations that he was way ahead of his fellow scientists at any point of time. But he is also remembered for another thing; a quality which made people call him a genius: his words. Prof. Einstein was a philosopher who clearly understood the laws of success and explained them like the way he did with his equations.

The New Map Of The Brain Trying to map the brain has always been cartography for fools. Most of the other parts of the body reveal their workings with little more than a glance. The heart is self-evidently a pump; the lungs are clearly bellows. How Spatial Navigation Correlates with Language Cognitive neuroscientists from the Higher School of Economics and Aarhus University experimentally demonstrate how spatial navigation impacts language comprehension. The results of the study have been published in NeuroImage. Language is a complicated cognitive function, which is performed not only by local brain modules, but by a distributed network of cortical generators. Physical experience such as movement and spatial motion play an important role in psychological experiences and cognitive function, which is related to how an individual mentally constructs the meaning of a sentence. Nikola Vukovic and Yury Shtyrov carried out an experiment at the HSE Centre for Cognition & Decision Making, which explains the relations between the systems responsible for spatial navigation and language.

10 Reasons Why Handheld Devices Should Be Banned for Children Under the Age of 12  The American Academy of Pediatrics and the Canadian Society of Pediatrics state infants aged 0-2 years should not have any exposure to technology, 3-5 years be restricted to one hour per day, and 6-18 years restricted to 2 hours per day (AAP 2001/13, CPS 2010). Children and youth use 4-5 times the recommended amount of technology, with serious and often life threatening consequences (Kaiser Foundation 2010, Active Healthy Kids Canada 2012). Handheld devices (cell phones, tablets, electronic games) have dramatically increased the accessibility and usage of technology, especially by very young children (Common Sense Media, 2013). As a pediatric occupational therapist, I’m calling on parents, teachers and governments to ban the use of all handheld devices for children under the age of 12 years.

8 Important Reasons To Let Go Of People Who No Longer Play An Important Part In Your Life There comes a point in every person's life when he or she parts ways with someone: ex, friend and anyone in between. Upon first meeting this person, there's a sweet beginning, but once you come to really know each other and grow comfortable, you suddenly realize that the relationship no longer brings any particular value to your life and is perhaps, even detrimental. Sometimes, we hold on to people purely based on how long we have known them.

5 Morning Rituals to Keep You Productive All Day Long Most of us work long hours: 40, 50 or even 60 hours each week. But chances are, given distractions like online entertainment, office snacking habits and ill-designed time management, we're only churning out high-quality work a portion of each day. Here are five practical steps to incorporate into any morning routine to optimize your time at the office and maintain productivity all day long: 7 minutes of exercise. Yep, not 10 -- just seven. Why? Hypnagogia and Hypnopompia Hypnagogia is the imagery, sounds and strange bodily feelings that are felt at “sleep onset.” This is a simplification though, as researchers have noted hypnagogic imagery in the lab at periods of quiet wakefulness as well as stage 1 sleep. Others have correlated hypnagogia with pre-sleep alpha waves and also REM intrusion into sleep onset.

Sinister Minds: Are Left-Handed People Smarter? Cesare Lombroso, the father of modern criminology, owes his career to a human skull. In 1871, as a young doctor at a mental asylum in Pavia, Italy, he autopsied the brain of Giuseppe Villela, a Calabrese peasant turned criminal, who has been described as an Italian Jack the Ripper. “At the sight of that skull,” Lombroso said, “I seemed to see all at once, standing out clearly illuminated as in a vast plain under a flaming sky, the problem of the nature of the criminal, who reproduces in civilised times characteristics, not only of primitive savages, but of still lower types as far back as the carnivora.” Lombroso would go on to argue that the key to understanding the essence of criminality lay in organic, physical, and constitutional features—each defect being a throwback to a more primitive and bestial psyche. And while his original insight had come from a skull, certain telltale signs, he believed, could be discerned long before an autopsy. Chief among these was left-handedness.