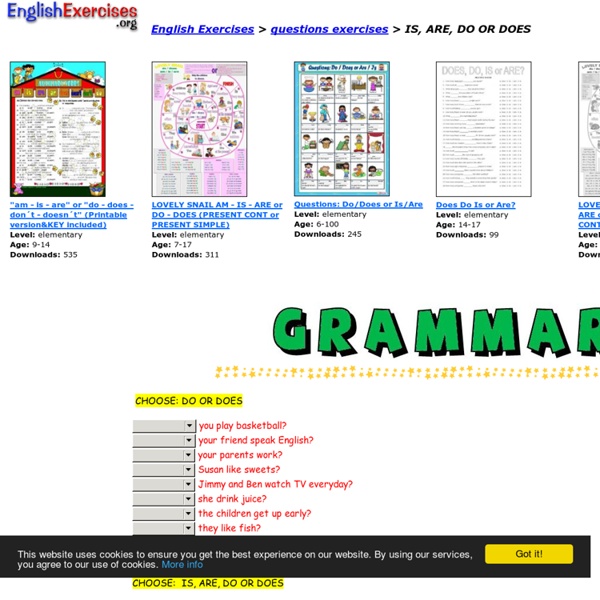 you play basketball? your friend speak English? your parents work? Susan like sweets? Jimmy and Ben watch TV everyday? she drink juice? the children get up early? they like fish? Tom go to school everyday? your friends like chicken? she a student? he like frogs? they from Argentina? he English? they play computer games? he drive a car? your mother a teacher? you 10 years old? you speak English? your brother singing now? you watching TV now? you go to bed early? she cooking at the moment? Peter and Sally go to school by bus? your parents doctors?

English Prepositions So what are prepositions? A preposition is a word which is used before a noun to show its connection to another word in the sentence. For example: Children's Library : Free Books : Free Texts Publisher's chromolithographed pictorial wrappers favoritefavoritefavoritefavorite ( 22 reviews ) Topics: Brothers and sisters, Orphans, Conduct of life, Education California Digital Library by Crane, Thomas, b. 1843?; Houghton, Ellen Elizabeth, 1853-1922

Pentagon asks hackers for help with cyber security  J. Scott Applewhite/AP Former top counterterrorism adviser Richard Clarke is sworn in to testify to the federal panel reviewing the Sept. 11 attacks in 2004. WASHINGTON - The Pentagon agency that invented the Internet is asking the hacker community for help in eliminating Defense Department computer vulnerabilities. The Defense Advanced Research Projects Agency, or DARPA, hosted a meeting this week for defense stakeholders and civilian computer experts, acknowledging that it has to start thinking differently about cyber security, Wired.com reported. And the computer networks that run U.S. infrastructure are so vulnerable to cyber attack that the White House should think twice before even attacking emerging adversaries, a national security expert said.

Best Music to Learn English Here are my top 5 music artists that English students should listen to. They have been chosen because they have clear pronunciation and great vocabulary (by great I mean interesting and useful- none of this street ganksta talk or old-fashioned nonsense that people just don’t say in real life). 1) George Ezra George Ezra is a singer from Hertford England.

Irregular verbs again I have already published several posts on irregular verbs: Past participles – divided according to the pronunciation and Present perfect tense. However, a week ago a student of mine contacted me and asked me if I could create a way for him to learn the irregular verbs. He spends a lot of time driving so he asked me to prepare something to listen to in his car. 6 Online Tools That Will Help The Writing Process Writing can be a difficult task for many students. Some have trouble getting started, others have trouble staying on task, and many struggle with both. Staying focused when you’re sitting at your computer and somewhat uninspired can be a disaster waiting to happen – there’s a lot of stuff to waste time with on The Interwebs! The Internet can be a huge distraction, but it can also be the tool that helps to make you a more efficient and better writer.

Irregular Verbs — Exercise 2 Directions: In the exercise that follows, you will read sentences that contain blanks. These blanks require the appropriate forms of irregular verbs. To keep track of your answers, print the accompanying handout. If you are unsure which choice to make, consult the rules. Otherwise, face the consequences!

Verb Rating: 4.0/5 (11 votes cast) List of Common Verb walk, run, play, sleep, read, write, jump, ride, talk, cry, laugh, climb, cook, wait, watch TV, dance, fight , fly drink, eat, listen, open, close, throw away, turn on, turn off, sing Irregular Verbs First the good news - all new verbs in English are regular. I photocopied the report. She faxed it to me. They emailed everybody about it. However, that doesn't help you to learn the approximately 180 irregular verbs which do exist. 21 Digital Tools to Build Vocabulary If you follow this blog, you know that I believe effective vocabulary instruction is just about the most important instructional activity for teachers to get right. For lots of reasons. Vocabulary influences fluency, comprehension, and student achievement.

Cloud computing: gaps in the “cloud” No. 336 - Bochum, 24.10.2011 Massive security flaws at Amazon Web Services discovered and remedied RUB researchers present hack at the ACM Cloud Computing Security Workshop in Chicago Does grammar matter? - Andreea S. Calude Spoken language has been neglected and marginalized for much of our history on account of its perceived inferiority in comparison to written language. Written language was historically regarded as the language of the ‘learned,’ given that few people could read or write. It also had permanence (written records can be preserved for hundreds of years, and it is only recently that speech recordings became an achievable technology for most of us), and it was thought to be of a higher standard and quality (often summed up as having “better” or more “correct” grammar). You can read more about this biased view of written language over spoken language in the online book “The Written Language Bias” by Peter Linell. We all know that languages differ with respect to their grammar – we have all tried to learn another language only to be baffled not just by new vocabulary but also by the order and other quirks of how that language organizes its vocabulary – but what can and what does actually vary?