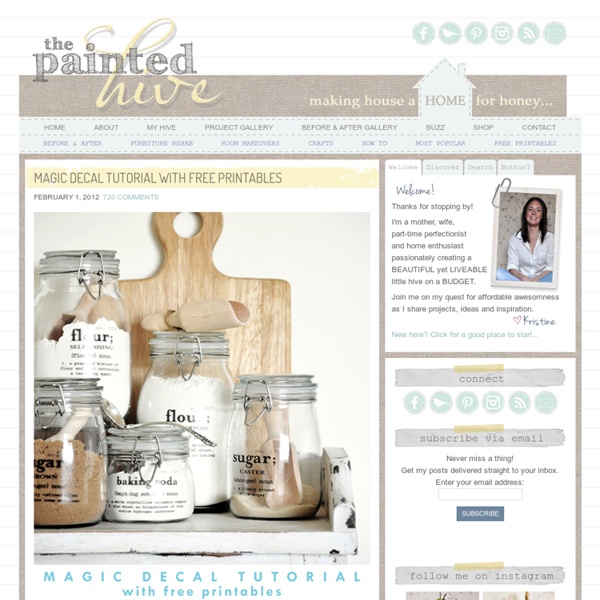 Some of you may remember, a little while back I posted a tutorial for DIY waterslide decals. Among other things, I mentioned how awesome they are for creating custom embellishments without the need for any fancy-pants equipment. Yep, waterslide decal paper is a truly fab product, though as great as it is, there is one drawback – although it’s somewhat tough it’s not especially durable. So, whilst it’s perfect for ornamental purposes, it’s not ideal for more practical applications…until now that is! Magic decal coating paper is a product designed to be used in conjunction with standard decal paper to make the finished transfers super durable – yes, even dishwasher resistant! If you’re already familiar with magic decal coating paper then please excuse my tardy excitement, though for everyone else who is just getting to the party now too, feel free to start throwing the streamers! 1 Image to transfer. Use anything you like. 2 Printer. You can use either a laser or an inkjet printer. 6 Scissors.

East Coast Creative: Modern Typography Meets Reclaimed Barnwood Back in May, I posted about this frame that I made from reclaimed barnwood: This piece is one of my absolute favorites. It’s the first frame I made from barnwood, and is what began my love affair with all reclaimed materials. I had purchased the phrase from Uppercase Living to to add to the frame and for almost 3 years, this frame has made me very happy. Build an Outside Oven You'll find most of the materials you need at a home center, except for the cardboard barrel, often used by movers. (You cut it in half lengthwise and use it to form the oven's curving top.) Look online under Barrels & Drums for a local source. Somewhat Quirky: Love One Another Subway Art - Fall Fix-Up #8 Part 1 It's still fall and one of the things that I've been needing to make is "due" this Saturday so I get to add one more thing to my Fall Fix-Ups 2012.A friend I made when we lived in Kansas City got married last week in Cancun. Her reception is this weekend in KC and we will be making a flying trip down (and back) to celebrate and wish her and her husband the best.This wedding means a lot to me. I know that sounds selfish, but she was always one of those girls that lived through one bad ending relationship after another.

How to Build Cold Frames Used to protect tender plants or rooted cuttings during the colder months, a cold frame is simply a box with a transparent lid or cover. It acts as a passive solar energy collector and reservoir. During the day, the sun's rays heat the air and soil in the frame; at night, the heat absorbed by the soil radiates out, keeping the plants warm. Our Home Are you dreaming of a white Christmas? I have a special delivery for you today. A WHITE CHRISTMAS Yup. I put my elf hat on, and made a little snow for you. Because I love you like that.

recycled {small updates on some new things, and a mini adventure} The studio is hanging in there nicely and dust is never under control -- a decent problem to have for a woodshop. I've been building things at my usual pace of slow-and-steady, always hunting for more lath and popping my head into every dumpster I pass, just in case. Chevron Pattern Recycled Wood Planter Box » The 91204 Blog After we built the planter box in the previous post for Stephanie, Dez was jealous and she wanted something cool like that for her own garden. So this is what she got and it’s by far one of our favorite DIY projects that we’ve done. It was actually kinda tedious, but totally worth it. After constructing the main box frame from cedar and redwood, the wood for the chevron patterns was mostly leftover pallet stock from various projects. We also used some wood from an old bed frame a neighbor gave us and since we’re revamping our bridal show booth, we didn’t need the white trim molding from that anymore, so we cut it up and used it too.

work The water station corner is coming to completion. Yes, today I sliced up an antique. For the second time, this poor thing has been put under a saw blade and given a big hole. Blog April 15th, 2014 Daniel and I just got back from Washington, DC. We drove up for our friends’ wedding celebration, but stayed to explore a little since neither of us had been since high school. The Typography of Sanborn New York City Maps NEW YORK Staten Island. Atlas 159, 1885 BROOKLYN New York. Atlas 80. Vol. 6, 1888 Variations of this design appeared between 1886 and 1988. Recycling in the landscape – reused concrete, affectionately known as urbanite. 07 Feb Recycling in the landscape – reused concrete, affectionately known as urbanite. One recent customer actually encouraged me to start a blog so we could document the sustainable landscape installation in their yard.

DEMO! Flour Paste Batik Batik is a resist method of fabric dyeing that uses wax . . . I did a lot of traditional batik back in the early 90's. It's a lot of fun, and you can get some incredible effects. DIY Shibori Today marks HonestlyWTF’s four year anniversary. Four years! To celebrate, we’re revisiting the very first tutorial we ever featured on the site: shibori tie dye. Lauren and I first discovered shibori after discovering an old photo on the web. The idea of recreating an ancient Japanese dyeing technique inspired us to spend an entire weekend experimenting with our favorite deep blue, indigo. After dyeing just about every white article of clothing in sight, our blue stained fingers excitedly uploaded the tutorial – we couldn’t wait to share it with our 30 readers.

Window Salvage Do you ever make something and just can't help smiling when you are done? That is how it was with this project. It ranks as one of my top 5 favorite projects of all time, and it was simple and came together (almost) effortlessly.