Everything you must know about Google Glass 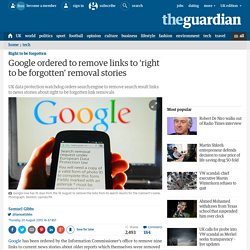 The search engine had previously removed links relating to a 10 year-old criminal offence by an individual after requests made under the right to be forgotten ruling. Removal of those links from Google’s search results for the claimant’s name spurred new news posts detailing the removals, which were then indexed by Google’s search engine. Google refused to remove links to these later news posts, which included details of the original criminal offence, despite them forming part of search results for the claimant’s name, arguing that they are an essential part of a recent news story and in the public interest. Google Glass and wearable tech: This is a game-changer, not a fad. It’s easy to identify something that’s going to take the world by storm. 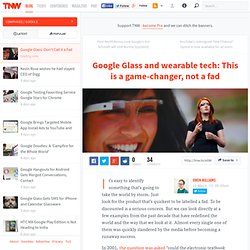 Just look for the product that’s quickest to be labelled a fad. To be discounted is a serious concern. But we can look directly at a few examples from the past decade that have redefined the world and the way that we look at it. Almost every single one of them was quickly slandered by the media before becoming a runaway success. In 2001, the question was asked “could the electronic textbook take the world by storm?” The walkman gave birth to a device that can store 16,000 songs. Google took the wraps off Glass recently and announced the opportunity for a handful of people to win a pair through its “if I had glass competition” along with those developers that pre-ordered a pair last year. In a word, it’s breathtaking to imagine. Companies have tried to address the fact that technology is somewhat of a barrier between us and the world and have released wearable technology already. Image: AFP/Stringer / Getty Images. How Will the New Wave of Wearable Tech Transform Society? When lawmakers consider banning something before it’s even hit the market, it’s clear that it has the potential to be truly disruptive. 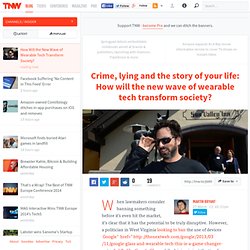 However, a politician in West Virginia looking to ban the use of devices Google" href=" Google Glass while driving is just the tip of an iceberg. Devices like Glass could well change society immensely over the next next few years. What devices are we talking about? Glass is the obvious flagship here, with its ability to snap and upload pictures and video live from a scene, not to mention its contextual alerts and the apps it can run but there’s the Memoto, too. This wearable camera is due to launch in the next few weeks, it will snap a photograph every thirty seconds throughout the day, candidly capturing whatever the wearer is doing. Memoto You may or may not object to government and police-controlled CCTV cameras tracking what we do, but we’re about to enter a world where anyone could be tracking everything you do with cameras you may not be aware of.

Google Gets Transparent With Glass, Its Augmented Reality Project. Larry Page and Sergey Brin have long had the dream of a hands-free, mobile Google, where search was a seamless process as you moved around the world. 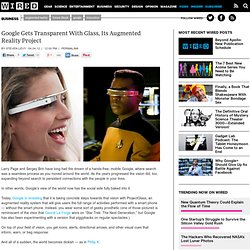 As the years progressed the vision did, too, expanding beyond search to persistent connections with the people in your lives. In other words, Google’s view of the world now has the social side fully baked into it. Today, Google is revealing that it is taking concrete steps towards that vision with ProjectGlass, an augmented reality system that will give users the full range of activities performed with a smart phone — without the smart phone.

Instead, you wear some sort of geeky prosthetic (one of those pictured is reminiscent of the visor that Geordi La Forge wore on “Star Trek: The Next Generation,” but Google has also been experimenting with a version that piggybacks on regular spectacles.) On top of your field of vision, you get icons, alerts, directional arrows, and other visual cues that inform, warn, or beg response. Nuff said. Google Glass Ban Underscores Privacy Concerns Months Before Futuristic Specs Are Even Released. David Meinert wasn't expecting his Facebook post to draw the attention of the international media. 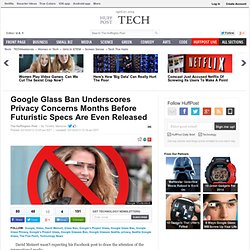 After all, he'd only spent about 20 seconds thinking about the post, which said that Google Glass, the much-hyped augmented reality spectacles scheduled to be released later this year, wouldn't be permitted in his Seattle bar and diner, The 5 Point Cafe. But the March 5 message, which noted the diner would be "the first Seattle business to ban in advance Google Glasses" and that "ass kickings will be encouraged for violators," received quite a bit of attention. A search in Google News for "5 Point Google Glass," for example, returns nearly 30,000 results, and publications in Russia, India, South America and throughout Europe have picked up the piece.

Meinert told KIRO that while the ban was partly in jest "to be funny on Facebook and get reaction," it had a serious message: 5 Point patrons "definitely don't want to be secretly filmed or videotaped and immediately put on the internet. "

What will it change?