How We See Google Glass Around The World. Google Glass is as common as a Tesla motoring down the 101 here in Silicon Valley, but it’s a novelty only read about through media outlets in most of the rest of the world. 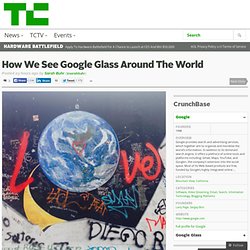 Sophia Dominiguez knew that novelty was wearing off fast in our city by the Bay, so the 22-year-old recent NYU grad says she decided to take Glass where most people had never had a chance to see it up close – the rest of the world. Dominiguez recently spent five weeks wearing the futuristic eyewear non-stop while traveling to five different countries and eight cities across the globe, gathering the reactions of everyone she met from Spain to Mumbai as they tried Google Glass on for themselves for the first time. In Berlin Dominiguez says people were way more concerned about privacy; in Mumbai they offered to build apps for the technology. In the UK Dominiguez tells me the people just couldn’t be bothered. In Paris, her unique eyewear gave her instant celebrity access. Google Names Glass Partners for Medical, Advertising Apps. Google+ Premium Features Roll Out to Google Apps Customers. Mashable. With a new software update, Google Glass users will now be able to see notifications just by moving their eyes. 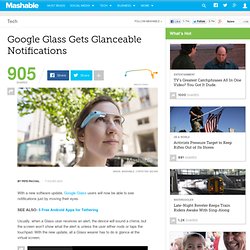 Usually, when a Glass user receives an alert, the device will sound a chime, but the screen won't show what the alert is unless the user either nods or taps the touchpad. With the new update, all a Glass wearer has to do is glance at the virtual screen. Google teams up with fashion designer Diane von Furstenberg for new Glass frames and shades. All channels Load More Support TNW - become Pro and we can ditch the banners. 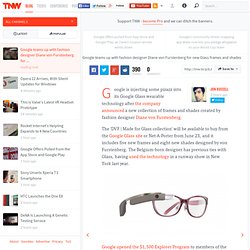 Google Glass Consulting Doctor Says No Evidence of Health Risks. Responding to a recent Betabeat article about headaches that some users are experiencing when wearing the Google Glass headset, Harvard optometrist and Google consultant Eli Peli clarified that he has yet to encounter any evidence of health risks for Glass or head-mounted displays in his research. 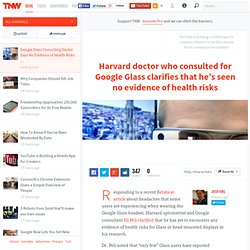 Dr. Peli noted that “very few” Glass users have reported discomfort or headaches during the trial phase. Metaio is Combining Infrared and AR Tech to Create a New Interface for Wearables. Augmented reality company Metaio has announced today that it is working on a system called ‘Thermal Touch’ which allows people using Google Glass-like wearable technology to turn any surface around them info a usable interface. 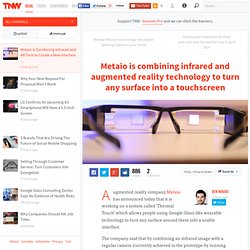 The company said that by combining an infrared image with a regular camera (currently achieved in the prototype by running them in tandem on a tablet), it could track the heat signature left when someone touches a surface. Combine this with digitally overlaid augmented reality and computer vision, and you have an all-new touch interface, anywhere you like. While it’s obviously not ready for the prime time just yet, Metaio says it’s working on the project to show off some of the possibilities of heads-up displays and to try and remedy some of the growing pains of navigating interfaces found on the current generation of wearable products. Mashable. Apple and Google Settle Motorola Lengthy Patent Lawsuit. Apple and Google have reached a settlement for the extended patent lawsuits between Apple and Motorola Mobility, as first reported by Reuters. 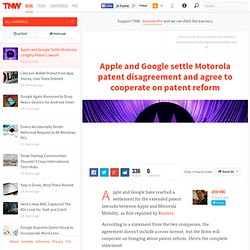 According to a statement from the two companies, the agreement doesn’t include a cross-license, but the firms will cooperate on bringing about patent reform. Here’s the complete statement: Apple and Google have agreed to dismiss all the current lawsuits that exist directly between the two companies. Apple and Google have also agreed to work together in some areas of patent reform. The agreement does not include a cross license. The legal battle between Apple and Motorola dates back to 2010, prior to Google’s acquisition of Motorola, which began in 2011. After kicking up a storm against the Android platform’s biggest manufacturers, Apple has steadily been making peace with its rivals. However, Apple’s fight with Samsung remains outstanding. New Google Glass App Lets You Nod To Pay With Bitcoin, Will Add Dollars This Summer.

While Google may be working on adding Google Wallet to Glass, and other big payment players are “eyeing up” (!) 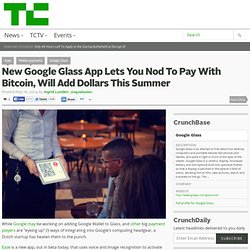 Ways of integrating into Google’s computing headgear, a Dutch startup has beaten them to the punch. Eaze is a new app, out in beta today, that uses voice and image recognition to activate the service, and nodding head gestures to confirm and complete payments. Eaze claims to be the first global payment solution to make its way to Glass, after first announcing its plans back in February of this year.

Starting with bitcoin and integrating with existing bitcoin wallets Coinbase and Blockchain.info, the plan is to add fiat currencies like dollars and euros, and corresponding wallets that hold them, this summer. Mashable. Google Glass may be great for taking videos on the fly, and getting directions without bumping into people on the street. 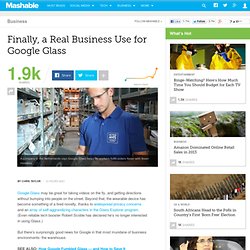 Beyond that, the wearable device has become something of a tired novelty, thanks to widespread privacy concerns and an array of self-aggrandizing characters in the Glass Explorer program. (Even reliable tech booster Robert Scoble has declared he's no longer interested in using Glass.) But there's surprisingly good news for Google in that most mundane of business environments: the warehouse. An e-fulfillment company in the Netherlands called Active Ants, which ships products for 50 online stores, gave Google Glass to its stock pickers. They're the guys who take stuff off the warehouse shelves, check it off an inventory list and ready it for shipping. Mashable. Today at 9 a.m. 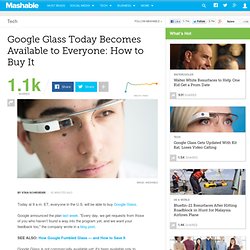 ET, everyone in the U.S. will be able to buy Google Glass. Google announced the plan last week. "Every day, we get requests from those of you who haven’t found a way into the program yet, and we want your feedback too," the company wrote in a blog post. Sick Kids Use Google Glass to Virtually Visit the Zoo. With all the talk of Google Glass' supposed image problem, it's easy to forget that the technology can enable some wonderful things. 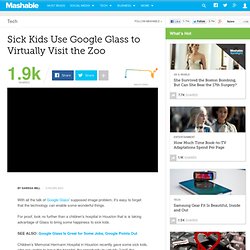 For proof, look no further than a children's hospital in Houston that is is taking advantage of Glass to bring some happiness to sick kids. Mashable. Mashable. Google Glass Explorers have a new way to live stream events through Glass. Livestream.com launched its first app for Google Glass, which app allows users to broadcast events to others through Glass in real time. The app is much simpler than its existing iOS and Android ones. While Livestream's mobile apps let users upload text and photo updates to events and add filters to videos, Livestream's app lets users share what they're looking at in real time. Augmedix nabs $3.2M for a Google Glass app made just for doctors. How can big data and smart analytics tools ignite growth for your company? Find out at DataBeat, May 19-20 in San Francisco, from top data scientists, analysts, investors, and entrepreneurs. Register now and save $200!

The day when your doctor wears smart glasses while examining you just got a little closer. San Francisco-based wearable-tech startup Augmedix has secured $3.2 million in funding from DCM and Emergence Capital Partners, just under a year after graduating from the Rock Health accelerator program. Augmedix is building clinical applications for Google Glass. For medical professionals, the benefits of these futuristic specs are fairly obvious: The device is nearly hands-free, so it’s easy to use it unobtrusively during an in-person meeting, and physicians can easily access more information about a new drug or the patient’s medical history.

Google Glass App for Firefighters Could Save Lives. A new Google Glass app in the works is anything but smoke and mirrors. Patrick Jackson, a firefighter and self-taught programmer in Rocky Mount, N.C., is working on a Google Glass app that may very well change the way firefighters do their jobs. Initial versions of the app already help with minor tasks, such as receiving messages from dispatch or identifying nearby hydrants. But these features are small potatoes compared to what Jackson's app may ultimately accomplish. Jackson envisions that the app may someday be able to provide maps and floor plans to firefighters battling smoke in unfamiliar buildings, or provide extraction diagrams for when firefighters need to safely remove civilians from a vehicle.

Some of these features are detailed in the video, below, although they aren't actually available yet, Jackson said. However, that doesn't mean they're far off. Jackson's interest in computers dates back to his childhood, when he started writing simple programs as early as 7 years old. Run from Zombies with the Race Yourself Google Glass App. Fitness apps seem like a perfect fit for Google Glass, given that the head-mounted computer is devoid of wires and requires a minimal amount of input from your digits. Race Yourself is a promising piece of Glassware that, using augmented reality, gives you an avatar to compete against in the real world.

Over 30 game modes will have you racing against yourself, a giant Indiana Jones-style boulder and even hordes of zombies. It’s a similar premise to fitness app Zombies, Run and augmented reality experiences such as SpecTrek, although we expect the Google Glass implementation will be more appealing to fitness enthusiasts. The app will also support multiple activities, so you can cycle against the Peloton in the Tour de France or skydive through virtual rings in the sky.

If you’re struggling to keep up with your fitness regime this could be a fun, effective way of staying motivated and beating your records.