Women: Let's Stop Allowing Race and Age to Divide Us - Ancella Livers and Trudy Bourgeois. By Ancella Livers and Trudy Bourgeois | 9:00 AM August 15, 2013 When we talk about the barriers that prevent female leaders from getting to the top, we often ignore one uncomfortable truth: women often let their racial and generational biases prevent them from helping each other. 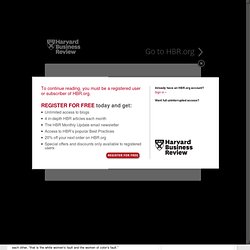 “I’m rejected,” one white millennial woman told us. “Women at the top don’t understand me and won’t take the time to get to know me. I’m not only excluded from the good ol’ boys club but also disconnected from the people I thought I could count on — other women.” “The tensions are not recognized or talked about,” we heard from an Asian-American management consultant. 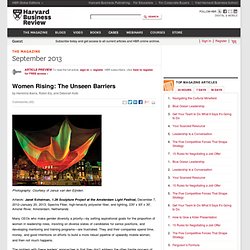 Artwork:Janet Echelman,1.26 Sculpture Project at the Amsterdam Light Festival, December 7, 2012–January 20, 2013, Spectra Fiber, high-tenacity polyester fiber, and lighting, 230' x 63' x 30', Amstel River, Amsterdam, Netherlands Many CEOs who make gender diversity a priority—by setting aspirational goals for the proportion of women in leadership roles, insisting on diverse slates of candidates for senior positions, and developing mentoring and training programs—are frustrated. They and their companies spend time, money, and good intentions on efforts to build a more robust pipeline of upwardly mobile women, and then not much happens. The problem with these leaders’ approaches is that they don’t address the often fragile process of coming to see oneself, and to be seen by others, as a leader. The solutions to the pipeline problem are very different from what companies currently employ. Becoming a Leader. 'Putting female talent forward will break the glass ceiling'

Servane Mouazan is the founder of Ogunte, the organisation campaigning for a better world, powered by women. 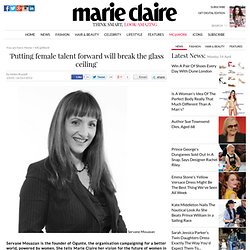 She tells Marie Claire her vision for the future of women in the workplace - and why compromise isn't an option. How would you describe Ogunte? 'Ogunte is an organisation that provides connections, training and executive coaching to women social entrepreneurs through community projects, enterprises, charities and campaigns. We run a business incubator, an angels network, and annual awards to promote women's achievements. How did you come up with the concept? In our network, although women's issues are very important, we focus more on the impact they have in society, and how can accelerate this impact. The trait that makes women great leaders. © Time Inc. 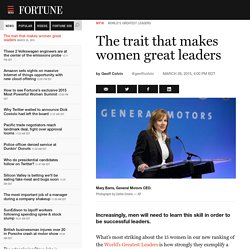 All rights reserved. Fortune.com is a part of the Time.com network of sites. Powered by WordPress.com VIP Email address or Password is incorrect Forgot Password? Glass Ceiling vs Glass Cage: What's the biggest barrier holding women back? Glass Ceiling - What Is It? Does One Exist? By Jone Johnson Lewis Definition: An invisible upper limit in corporations and other organizations, above which it is difficult or impossible for women to rise in the ranks. 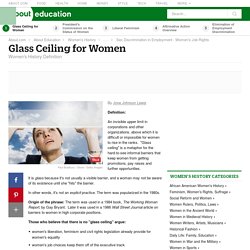 "Glass ceiling" is a metaphor for the hard-to-see informal barriers that keep women from getting promotions, pay raises and further opportunities. It is glass because it's not usually a visible barrier, and a woman may not be aware of its existence until she "hits" the barrier. In other words, it's not an explicit practice.

Origin of the phrase: The term was used in a 1984 book, The Working Woman Report, by Gay Bryant. Female Entrepreneurship: Shrinking the Glass Ceiling. The term glass ceiling was first used in 1984 to reference an invisible barrier that kept women (and minorities) from achieving corporate leadership solely due to bias and not skills, experience or ability. 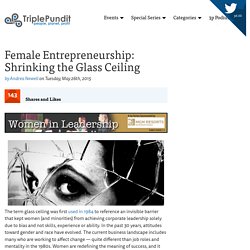 In the past 30 years, attitudes toward gender and race have evolved. The current business landscape includes many who are working to affect change — quite different than job roles and mentality in the 1980s. Empowering Women in Business - The Glass Ceiling - Feminist Majority Foundation. The conundrum of the glass ceiling. IT IS 20 years since the term “glass ceiling” was coined by the Wall Street Journal to describe the apparent barriers that prevent women from reaching the top of the corporate hierarchy; and it is ten years since the American government's specially appointed Glass Ceiling Commission published its recommendations. 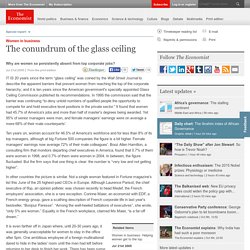 In 1995 the commission said that the barrier was continuing “to deny untold numbers of qualified people the opportunity to compete for and hold executive level positions in the private sector.” It found that women had 45.7% of America's jobs and more than half of master's degrees being awarded. Yet 95% of senior managers were men, and female managers' earnings were on average a mere 68% of their male counterparts'. Ten years on, women account for 46.5% of America's workforce and for less than 8% of its top managers, although at big Fortune 500 companies the figure is a bit higher. Female managers' earnings now average 72% of their male colleagues'.