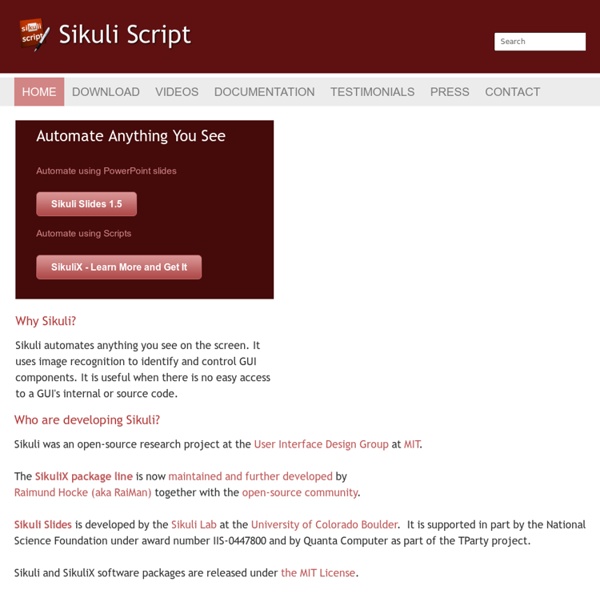 LeechBlock Current Version: 0.6.7.1 What is LeechBlock? LeechBlock is a simple productivity tool: an extension for the Firefox web browser designed to block those time-wasting sites that can suck the life out of your working day. (You know: the ones that rhyme with "Blue Cube", "Space Hook", "Sticky Media", "Quitter", and the like.) All you need to do is specify which sites to block and when to block them. Automate your UI using Microsoft Automation Framework Download source - 57.56 KB Introduction UI automation is a programmatic interface to the user interface of your application to external applications that may be interested in programmatic communication with your UI. In fact, UI automation is the prime facilitator for accessibility features in Windows where external applications such as screen readers that have no clue about your application, can still interact with your application easily.

Meet Node-RED, an IBM project that fulfills the internet of things’ missing link If you play around with enough connected devices or hang out with enough people thinking about what it means to have 200 connected gizmos in your home, eventually you get to a pretty big elephant in the room: How the heck are you going to connect all this stuff? To a hub? To the internet? To each other? Using UI Automation for Automated Testing This overview describes how Microsoft UI Automation can be useful as a framework for programmatic access in automated testing scenarios. UI Automation provides a unified object model that enables all user interface (UI) frameworks to expose complex and rich functionality in an accessible and easily automated manner. UI Automation was developed as a successor to Microsoft Active Accessibility.

wiki imacros Scope iMacros for Firefox (version 10 and above) is one of the iMacros Webextensions. A detailed documentation of features and limitations is found in that page. May the command line live forever - Vimperator Telehack Telehack is a simulation of a stylized arpanet/usenet, circa 1985-1990. It is a full multi-user simulation, including 25,000 hosts and BBS's from the early net, thousands of files from the era, a collection of adventure and IF games, a working BASIC interpreter with a library of programs to run, simulated historical users, and more. Connecting ---------- On the web: or open a shell and type telnet telehack.com Telehack.com supports an open web telnet interface. You can also telnet directly to telehack on the regular telnet port of 23. UI Automation Overview Microsoft UI Automation is the new accessibility framework for Microsoft Windows, available on all operating systems that support Windows Presentation Foundation (WPF). UI Automation provides programmatic access to most user interface (UI) elements on the desktop, enabling assistive technology products such as screen readers to provide information about the UI to end users and to manipulate the UI by means other than standard input. UI Automation also allows automated test scripts to interact with the UI. UI Automation provides full functionality in Windows Vista, Microsoft Windows XP, and Windows Server 2003.

SikuliWebDriver - sikuli-api - Sikuli Java API SikuliFirefoxDriver extends Selenium's FirefoxDriver by adding Sikuli's image search capability. It is useful for automating interactions with highly visual interfaces such as Google Map. Use findImageElement() is the method that allows one to find an element using an image. For example, the code below opens Firefox, opens Google Code's homepage, and locates the logo image of Google Code. AS Names - Vimperator AS0 -Reserved AS- AS1 LVLT-1 - Level 3 Communications, Inc. AS2 DCN-AS - University of Delaware AS3 MIT-GATEWAYS - Massachusetts Institute of Technology AS4 ISI-AS - University of Southern California AS5 SYMBOLICS - Symbolics, Inc.

mapping MAC addresses - samy kamkar - Vimperator android map exposes the data that Google has been collecting from virtually all Android devices and street view cars, using them essentially as global wardriving machines. You can use this tool to accurately locate virtually any router in the world, as well as position iPhones and Android phones. When the phone detects any wireless network, encrypted or otherwise, it sends the BSSID (MAC address) of the router along with signal strength, and most importantly, GPS coordinates up to the mothership. This page allows you to ping that database and find exactly where any wi-fi router in the world is located. Note that iPhones also send this BSSID and Cell Tower Information up to Apple, as well. You can enter any router BSSID/MAC address to locate the exact physical location below, or try the demonstration router by hitting "Probe" below.

Which VPN Providers Really Take Anonymity Seriously? As detailed in yesterday’s article, if a VPN provider carries logs of their users’ activities the chances of them being able to live up to their claim of offering an anonymous service begins to decrease rapidly. There are dozens of VPN providers, many of which carry marketing on their web pages which suggests that the anonymity of their subscribers is a top priority. But is it really? In The UK, You Will Go To Jail Not Just For Encryption, But For Astronomical Noise, Too - Falkvinge on Infopolicy - Vimperator There was some surprise in the comments of yesterday’s post over the fact that the United Kingdom has effectively outlawed encryption: the UK will send its citizens to jail for up to five years if they cannot produce the key to an encrypted data set. First of all, references – the law is here. You will be sent to jail for refusing to give up encryption keys, regardless of whether you have them or not. Five years of jail if it’s a terrorism investigation (or child porn, apparently), two years otherwise. It’s fascinating – there are four excuses that keep coming back for every single dismantling of democracy. It’s terrorism, child porn, file sharing, and organized crime.