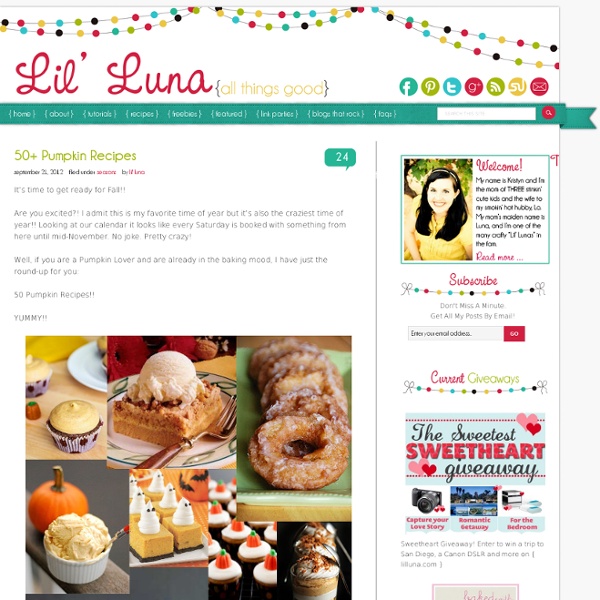 It’s time to get ready for Fall!! Are you excited?! I admit this is my favorite time of year but it’s also the craziest time of year!! Looking at our calendar it looks like every Saturday is booked with something from here until mid-November. No joke. Pretty crazy! Well, if you are a Pumpkin Lover and are already in the baking mood, I have just the round-up for you: 50 Pumpkin Recipes!! Pumpkin Spice Bundt Cake from I am Baker Pumpkin Blondies from Inspired by Charm Easy Pumpkin Bread from Chef in Training Pumpkin Streusel Cheesecake Bars from Betty Crocker Pumpkin Coffee Cake with Brown Sugar Glaze from Clever Housewife Pumpkin Cheesecake Mousse from Dashing Dish Pumpkin Cheesecake Bars from My Recipes Glazed Pumpkin Buttermilk Donuts from Barefoot and Baking Pumpkin Bread with Salted Caramel Drizzled Pumpkin Buttercream from A Kitchen Addiction Pumpkin Cheesecake from Love and Laundry Cinnamon Pumpkin Dessert from Grandmas Kitchen Great Pumpkin Dessert from Taste of Home Pumpkin Fudge from BHG

12 Cheap Gourmet Foods in Japan Japanese people are passionate about food. It's not just fine Japanese cuisine that gets people excited. In Japan, inexpensive food also gets respect. B-Class Gourmet is a Japanese term for connoisseurs of quality (but inexpensive) food. Homemade Girl Scout Cookies: Samoas Bars I love the look of the original Samoas Girl Scout Cookies, but making them from scratch can be a little bit time consuming. This is largely because the dough must be rolled out, cut out and then each of the cookies has to be handled individually for topping. The results are well worth it, in my opinion, but we don’t always have time to make a labor-intensive recipe – no matter how bad a craving for Girl Scout cookies gets.

Cinnamon Sugar Pull-Apart Bread Looks yummy, right? And let me tell you, this cinnamon bread really is yummy! Immensely! I am actually so impressed by it that I would call it a gift from heaven. Pumpkin Pie Pancakes (with Caramel Sauce) I had a bunch of pumpkin puree leftover that needed to be used and I figured that it was the perfect opportunity to make one of my favourite pumpkin dishes, pumpkin pie pancakes, and to update the photos for the recipe! Pumpkin pie pancakes are one of my favourites because they are so nice and light, fluffy, moist and tender and not only do they taste just like pumpkin pie but they are so quick and easy to make! I mean really, it is as simple as mixing the dry ingredients, mixing the wet ingredients, mixing them together and the cooking the pancakes! In the past I would normally have served these pumpkin pie pancakes smothered in maple syrup but more recently I have been liking the pumpkin and caramel flavour combo and since homemade caramel sauce is so easy to make that is the way that I went this time.

The Butter Steak: What's the Best Way to Cook a Steak? I'm not interested in carbonizing the surface of the meat. To me that ruins the flavor. - Alain Ducasse It was a bachelor weekend of sorts. My wife mercifully let me pass on attending a wedding of an old family family friend, so I had the whole weekend alone in the apartment to get work done. I had some crazy projects planned including a mad braise of a cow tongue, but the first night alone was all about pure unrestrained male gluttony.

Death By Oreo Cupcakes They are probably the best Oreo cakes I have ever tried. A lot of cake's that I have experimented with before are like a vanilla cake with bits of Oreo in them, which didn't really give them enough Oreo flavor. But these were a lot better. I used a dark chocolate fudge cake mix instead of just a regular chocolate cake mix, which went really well with the cookies and gave the cakes just a little more flavor.

- StumbleUpon From the molten yolk and bacon crunch of a hand-held breakfast, to the gooey charm of grilled cheese for lunch, nothing matches the simple pleasures of well-made sandwiches. They're quick to assemble, infinitely adaptable, easy to eat, and immediately satisfying—the very definition of good food. The 25 sandwiches you're about to meet can be thrown together during the average basketball halftime or, with practice, during the seventh-inning stretch. (Who needs hot dogs, anyway?) Use each recipe as a basic road map, but bring your talent for finding creative routes. You'll easily reach your final destination: a full belly and a satisfied smile.

2-Minute Chocolate Chip Cookie For One This is one of those ‘I-need-a-cookie-right-now-or-I-die’ recipes that can be prepared in almost no time.We all know that kind of situation, don’t we? I definitely do, I confess.And you know what? This impressive cookie not only takes less than 5 minutes to prepare, it tastes really delicious. Just like a good chocolate chip cookie.The preparation is beyond easy… just have a look… First you need this stuff. Buffalo Chicken Rolls I’m thinking we’re very comfortable together at this point, me and you. You and me. At best, we’re virtual soul mates bonded through food and cooking. At worst, we’re in a one-sided pen pal relationship and you’re not keeping up your end of the bargain. I’m tired of paying for postage when you never write back.

Homemade Nutella or Hazelnut Chocolate Spread Recipe - Italian Food and Recipes - Scordo.com (photo: from left to right: processing the ingredients, toasting hazelnuts, final product) Nutella was invented in Italy in the 1940′s and was a response to the shortage of cocoa (given World War II) and a way to extend the chocolate supply in Italy. The company, founded by Pietro Ferrero, used hazelnuts as the extender given the abundance of the nut in northwestern Italy. Nutella is a popular spread throughout the world and even boasts dedicated recipe sites like BellaNutella.com run by our friend Paula. Nutella was a staple product in our Italian American household (it was introduced in select US markets in 1983) and pantry and was a particular favorite of my sister, Roseann.

Hydra's Solar-Hydrogen Power Makes Clean Water From Dirty at 20,000 Gallons a Day For the one in every eight souls around the world lacking access to pure drinking water, how about this: A solar-powered water purification system that spits out pure water, hydrogen and, just for kicks, electricity too. Could it get any better than that? The device is called Hydra, and like its many-headed mythological namesake it truly serves a multitude of purposes: As its press release notes, "imagine a single trailer-mounted device that turns scum into over 20,000 gallons of pure water a day, stores electricity better than a battery, makes medical-grade oxygen, and runs on the sun." That's quite enough benefits from one device, thankyouverymuch. It works on a very simple, long-understood principle: electrolysis.

Deep-Dish Chocolate Chip Cookie for One By Lauren Zembron, on July 20th, 2012 I know, I know… it seems as though I’ve been posting sweet recipe after sweet recipe (with a little something cheesy thrown in); but you see, after what seemed like a long time during which sweets were unappealing during my first trimester, (what can I say, pregnancy does some strange things to your body!), they’re apparently back with a vengeance on my appetite’s menu. Sooooo if you’re a sweet freak like me, all I can say about my recent recipe post pattern is: you’re welcome. And if you’re not?