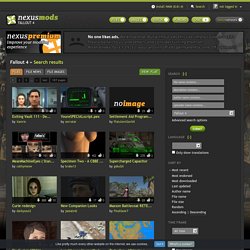 Lady Boyle's Last Party is a mission in which Corvo Attano must infiltrate a masquerade ball at the Boyle Mansion, eliminate the correct Boyle sister, and escape. 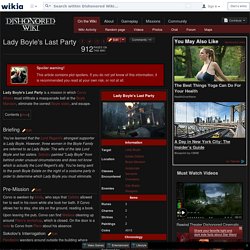 Briefing Edit You've learned that the Lord Regent's strongest supporter is Lady Boyle. However, three women in the Boyle Family are referred to as Lady Boyle: The wife of the late Lord Boyle and her sisters. Sokolov painted "Lady Boyle" from behind under unusual circumstances and does not know which is actually the Lord Regent's ally.

Pre-Mission Corvo is awoken by Emily, who says that Callista allowed her to wait in his room while she took her bath. Upon leaving the pub, Corvo can find Wallace cleaning up around Piero's workshop, which is closed. Sokolov's Interrogation Edit Pendleton wanders around outside the building where Sokolov's cage is located. Dumpster filled with rats. Finding Piero Corvo can find Piero on the second floor in the servants' quarters looking through a keyhole to spy on Callista while she bathes. The Target. AdventureQuest. Tomb Raider (2013) Info and Walkthrough. This walkthrough applies to both the original PC/PlayStation/Xbox release and Tomb Raider Definitive Edition for PS4/Xbox One. 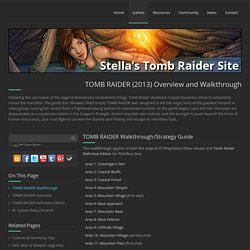 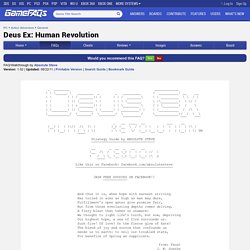 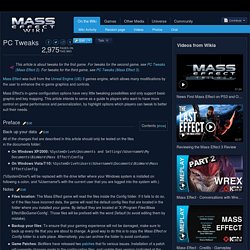 Mass Effect's in-game configuration options have very little tweaking possibilities and only support basic graphic and key mapping. This article intends to serve as a guide to players who want to have more control on game performance and personalization, by highlight options which players can tweak to better suit their needs. Preface Edit Back up your data Edit All of the changes that are described in this article should only be tested on the files in the documents folder: Romance - Mass Effect Wiki - Mass Effect, Mass Effect 2, Mass Effect 3, walkthroughs and more. - Wikia. Romance is possible in Mass Effect, Mass Effect 2, and Mass Effect 3 for both a male and female Shepard. 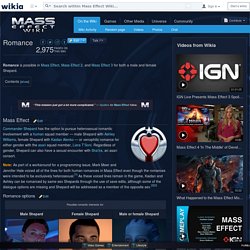 Mass Effect Edit Commander Shepard has the option to pursue heterosexual romantic involvement with a human squad member — male Shepard with Ashley Williams, female Shepard with Kaidan Alenko — or xenophilic romance for either gender with the asari squad member, Liara T'Soni. Regardless of gender, Shepard can also have a sexual encounter with Sha'ira, an asari consort. Note: As part of a workaround for a programming issue, Mark Meer and Jennifer Hale voiced all of the lines for both human romances in Mass Effect even though the romances were intended to be exclusively heterosexual.[1] As these voiced lines remain in the game, Kaidan and Ashley can be romanced by same-sex Shepards through the use of save edits, although some of the dialogue options are missing and Shepard will be addressed as a member of the opposite sex.[2][3] 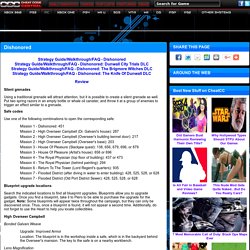 Silent grenades Using a traditional grenade will attract attention, but it is possible to create a silent grenade as well. Put two spring razors in an empty bottle or whale oil canister, and throw it at a group of enemies to trigger an effect similar to a grenade. Safe codes Use one of the following combinations to open the corresponding safe: Roberts Space Industries. A ship's Upgrade Capacity defines its ability for a ship to add additional modules or systems to the base hull. 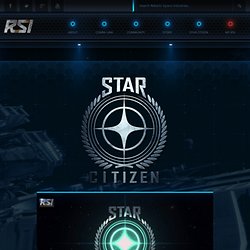 Some upgrades–for instance, an enlarged cargo hold–will require more than one upgrade slot. The number and combination of potential upgrade modules is nearly limitless, but some examples include: Enhanced Cargo Hold. FINAL FANTASY XIV: A Realm Reborn. The Witcher 3 Wild Hunt Guide: Romance, Sex & Broken Hearts Guide. Captain Camper earned his super powers after smashing his head into a 1980s arcade machine following an agonizing 10 match losing streak against a young girl in a flower dress and a Barbie headband. 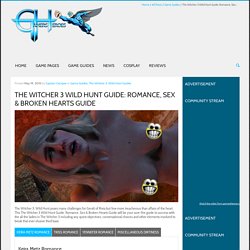 The electrical surge caused by his head penetrating the screen altered the electro-chemical balance of his brain, changing the rate at which his body developed and giving him super human gaming leetness (unless it's beat 'em ups, as he still sucks) He now uses his powers to offer gamers superior gaming guides. Hoping to help his fellow gamers avoid the contagious nerd rage that resulted in a permanent concussive state. Introduction - Strategy Guide - The Witcher 3: Wild Hunt. Strategy Guide to Witcher 3: Wild Hunt offers all most important information about the game's rules. 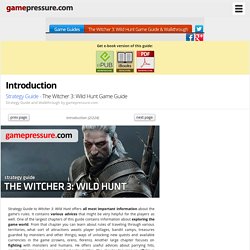 It contains various advices that might be very helpful for the players as well. One of the largest chapters of this guide contains information about exploring the game world. From that chapter you can learn about rules of traveling through various territories, what sort of attractions awaits player (villages, bandit camps, treasures guarded by monsters and other things), ways of unlocking new quests and available currencies in the game (crowns, orens, florens).