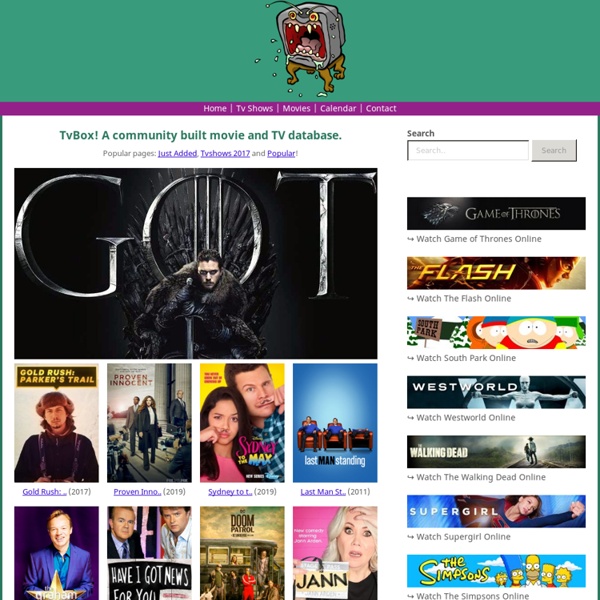 When Old School Was New: Nas It Aint Hard To Tell : The Record hide captionNas, in a photo from the mid-1990s. Courtesy of the artist Nas, in a photo from the mid-1990s. www.empireonline.com - StumbleUpon From Brazil to Japan to France and Senegal, from Neo-Realism to Dogme to J-horror, we've compiled a list of the very best films not in the English language (note: features, not documentaries). So rustle up some sushi, strike up a gauloise and make sure you've locked your bicycle as we count down the top 100 world cinema movies... 100. Night Watch Year: 2004Country: RussiaDirector: Timur Bekmambetov

50 Things Everyone Should Know - StumbleUpon by Mark and Angel Self-reliance is a vital key to living a healthy, productive life. To be self-reliant one must master a basic set of skills, more or less making them a jack of all trades. Contrary to what you may have learned in school, a jack of all trades is far more equipped to deal with life than a specialized master of only one. While not totally comprehensive , here is a list of 50 things everyone should know how to do.

Learning How to Code Has Never Been Easier Get the FlatPix UI Kit for only $7 - Learn More or Buy Now Programming isn’t just a niche specialization anymore, rather a necessity for tech-professionals regardless of the industry in which they work. Thankfully for them, it couldn’t be any easier.As such, there’s a big push lately to make coding literacy more widespread among the general populace. Even Mayor Bloomberg is getting in on the act, pledging to learn basic coding in 2012 as his New Year’s resolution. For those who want to learn to code, there are a number of online school coding programs that can guide them through the process.

25 Stunning HDR Wallpapers - StumbleUpon Credits (not in order): Trey Ratcliff, Others remain Unknown. If you are the owner or know the owner of any of theses HDR wallpapers, Please let us know. You are free to download these photos and enjoy them but you may not use them commercially. The copyright belongs to the respective photographers. Approaching the Movie Inside Your Movie – the Art of Title Design Do you remember the grimy creepiness of Se7en‘s opening, or the elegiac power of Blue Valentine‘s title sequence? Some films keep titles to a minimum, jumping into the story as quickly as possible. Others approach the sequence as a kind of overture, giving audiences a taste of the story-world they are about to enter.

Guitar/Guitar Chords Song Library - Wikibooks, collection of open-content textbooks - StumbleUpon The following is a list of notable easy to learn guitar songs from the 1950s to the present. It also contains links to external websites containing different informal chords to songs which represent many different authors' own interpretations of the original songs. Most of the chords on the list are relatively easy to learn, and would be a great start for novice guitar players who are interested in improving their playing abilities. Cool Ideas May be You Have Never Think Of.... I know in our daily life their are lots of big things to solve, but have you ever thought about tiny little things, which can be solved by some weird ideas? ok…. i am sure you are not getting me? Right!!! then have a look at these…. and make your life easier…… [ad1] [ad2]

'Walk Off the Earth' Gets 50 Million YouTube Views in a Month [VIDEO] - StumbleUpon Meet Walk off the Earth, the ultra-talented quintet that turned its version of a sleeper hit into a viral phenomenon on YouTube and earned itself a record deal. The Canadian indie band posted a video covering Gotye's "Somebody That I Used to Know" last month, and it has since been viewed on YouTube nearly 50 million times. The clip shows the band playing on a single guitar. One strums the guitar while the others tap and pluck along. Now the band — which has been together for nearly six years — has earned itself a record deal with Columbia Records. The captivating video caught the attention of Russell Crowe and Alyssa Milano, who tweeted the cover to their Twitter followers, and the band recently performed on Ellen.