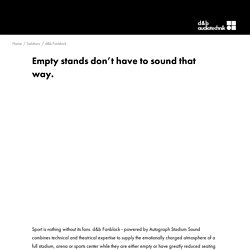 The intuitive playback system and audio library content create realistic crowd responses to the action on the field, court or pitch from pre-game to victory. Your sound package options include: Use a neutral approach with non-specific crowd responsesRally the home team with customized sound cues and fan chants via content partners fanchants.comLet fans communicate their excitement live using MyApplause Our global network of distribution partners will provide the rental of a d&b system, tailored to the individual needs of your venue and surrounds athletes and coaches with authentic sounds of passion, excitement and dedication of their fans. (498) Dear Esther: Landmark Edition - Full Game Walkthrough Gameplay & Ending (Director's Commentary 2017) (13) Spaceship Sound Design Tutorial with Marshall McGee. (60) The Beautiful Lies of Sound Design. FIFA 18: We spoke to the team behind the EA Sport game's music soundtrack.

Ask any FIFA fan what they like about the game and they’ll usually stick to the norm; the gameplay, how realistic it is, the graphics, and the pleasure of being able to beat your mates time after time. 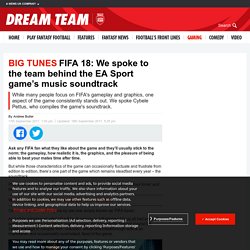 But while those characteristics of the game can occasionally fluctuate and frustrate from edition to edition, there’s one part of the game which remains steadfast every year – the soundtrack. Play anyone of a certain age Idlewild’s classic ‘You Held The World In Your Arms’ and there’s a good chance they’ll say: ‘That was on FIFA 2003, right?’. As Naughty Dog Crunches On The Last Of Us II, Developers Wonder How Much Longer This Approach Can Last.

One Friday night last month, some artists at the video game studio Naughty Dog were working on their latest game when they heard a crash. 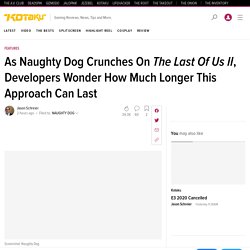 A large metal pipe had fallen from above them and landed right next to their desks. If it had dropped a few feet closer, the consequences might have been dire. It was late, past 9 p.m., and the construction workers above had perhaps recklessly assumed that nobody was there. But at Naughty Dog, people were always there. The owners of the building reacted quickly, firing that construction team, hiring a new one, and installing new safety measures to ensure that an accident like that wouldn’t happen again.

Blog. From the creators of Dehumaniser, Krotos has created an all-in-one solution for designing any custom vehicle sounds. 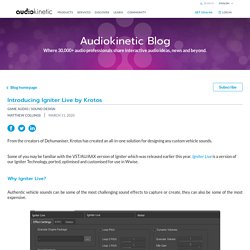 Some of you may be familiar with the VST/AU/AAX version of Igniter which was released earlier this year. Igniter Live is a version of our Igniter Technology, ported, optimised and customised for use in Wwise. Why Igniter Live? Pretty Ugly GameSound Study » Binding of Isaac (2012) – Music & No Music Comparison. Sound logic: Scruffy explains adaptive audio. BBC Radio 3 - Sound of Gaming, The secret tricks of video game composers. Interview: The sound of Untitled Goose Game. Flawless Victory: Crafting a cinematic soundtrack for Mortal Kombat 11 – Audio Media International. 2019’s biggest fighting game, Mortal Kombat 11, combines carefully crafted music and dialogue to help define a truly cinematic audio experience for the player. 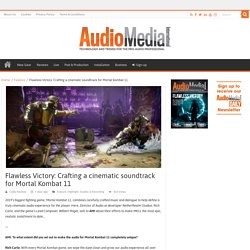 Here, Director of Audio at developer NetherRealm Studios, Rich Carle, and the game’s Lead Composer, Wilbert Roget, talk to AMI about their efforts to make MK11 the most epic, realistic installment to date… (150) How Amnesia: The Dark Descent Tricked Players Into Scaring Themselves. Quick Chat: Lord Danger takes on VFX-heavy Devil May Cry 5 spot. By Randi Altman Visual effects for spots have become more and more sophisticated, and the recent Capcom trailer promoting the availability of its game Devil May Cry 5 is a perfect example. 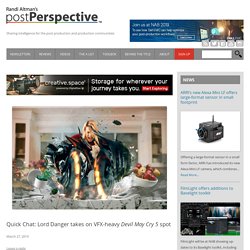 The Mike Diva-directed Something Greater starts off like it might be a commercial for an anti-depressant with images of a woman cooking dinner for some guests, people working at a construction site, a bored guy trimming hedges… but suddenly each of our “Everyday Joes” turns into a warrior fighting baddies in a video game. Josh Shadid The hedge trimmer’s right arm turns into a futuristic weapon, the construction worker evokes a panther to fight a monster, and the lady cooking is seen with guns a blazin’ in both hands. When she runs out of ammo, and to the dismay of her dinner guests, her arms turn into giant saws. We reached out to Lord Danger founder/EP Josh Shadid to learn more about their collaboration with Capcom, as well as their workflow. Hiring: Audio Lead / Sound Designer. OFFICIAL THE DIVISION 2 -THE SOUND OF THE DIVISION 2. (111) Ape Out - Reactive Music System. Vehicle Engine design – Project CARS, Forza Motorsport 5 and REV.

With this article I really wanted to find out about the nuts and bots of vehicle engine sound design and implementation. 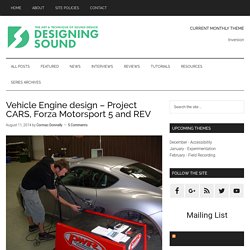 So I contacted a few people and got some great responses and a fascinating insight into the process. My thanks to Stephen Baysted, Audio Director and Composer at Slightly Mad Studios, Greg Hill, Sound Designer at Soundwave Concepts, Adam Boyd, Sound Designer and John Twigg, Software Engineer at Crankcase Audio and Nick Wiswell, Audio Creative Director at Turn 10 Studios. DS: I started by asking Greg Hill about his work on racing titles in the 90’s. Greg Hill: In the mid to late 90’s I was just modding the sounds in titles like Need For Speed, GP1, Sports Car GT & GP Legends.

I’ve always been a musician with recording gear; I taught multimedia, I’m bit of a computer geek and a car fanatic – well – this all came together! I pushed these developers to model engines in a more realistic way than ever done before. DS: And now? Tsugi : Software for Creatives. Red Dead Redemption 2 install size, Red Dead Online players, and more RDR2 details. A slew of new details about Red Dead Redemption 2 have come to light, revealed not by way of press release or fancy-schmancy trailer, but by the fine print on the Red Dead Redemption 2 PS4 Pro bundle. 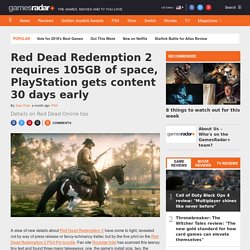 Fan site Rockstar Intel has scanned this teensy tiny text and found three major takeaways: one, the game's install size, two, the number of players supported in Red Dead Online, and three, the length of time PS4 players get to enjoy timed exclusivity on post-launch content. Let's break it all down. Red Dead Redemption 2 requires 105GB of hard drive space First of all, holy crap. BBC Radio 4 - In My Head. Community - Unreal Engine Forums. Ten Major Game Studios Closed in the Past 12 Months — What Now? The games industry was left shocked after the majority studio closure of Telltale Games occurred Friday in the form of a mass layoff, but this is just one studio effectively closed in the wake of nine others in this past year, as reported by PCGamer. 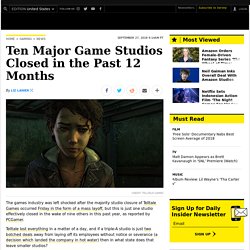 Telltale lost everything in a matter of a day, and if a triple-A studio is just two botched deals away from laying off its employees without notice or severance (a decision which landed the company in hot water) then in what state does that leave smaller studios? Earlier this month, the industry also lost Capcom Vancouver, studio behind the “Dead Rising” franchise and employer of 158 people who lost their jobs.

Here are the studios we’ve lost in the games industry in the past year: Issue 1801, 2018. The Intellectual Structure of Game Research by Paul Martin An invisible colleges approach using keyword analysis and co-citation analysis reveals 4 or 5 distinct communities based on theoretical, topical and methodological distinctions. 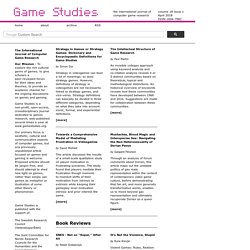 An historical overview of keywords reveals how these communities have developed between 1966 and 2016. Suggestions are made for collaboration between these communities. [more] Audiomediainternational. BBC World Service - In the Studio, The Immersive Hyper Reality World of Star Wars. Audiomediainternational. Audiomediainternational. Richard Ludlow of Hexany Audio Discusses Giving Life to Interactive Projects Through Sound & Music - Sound & Picture. Hexany Audio founder Robert Ludlow What would a video game be without sound effects heightening the immersion level or even the score letting the player know when something dreadful or exciting is about to happen? The answer being, pretty flat and not very entertaining.

Extending the Star Wars music canon is both a tremendous privilege and a weighty responsibility – one that’s taken extremely seriously by Electronic Arts’ star development studio DICE who lead a globally distributed team in bringing the world cutting edge videogames of the highest quality and reputation. Famed for their superbly crafted multi-award winning ‘Battlefield’ series, it came as no surprise they should be entrusted with the hallowed Star Wars universe and have respected audio director and all-round audiophile Ben Minto reprise his role for their second interactive foray into the beloved franchise. This fade is nicely covered by the blaster fire. Archive — Twenty Thousand Hertz. Voicing concerns: the problem with video game acting. Most admirers of Quantic Dreams' interactive drama Heavy Rain will readily agree on the game's most glaring fault – the inconsistent voice acting.

The visuals are astonishingly atmospheric, the plot (though choppy at times) is compelling, and the lush orchestral score is wonderfully resonant… But… Well, some of the acting performances are wooden to the point of somnambulism. The thing is, Heavy Rain is far from alone. Attention and Immersion. The Open Acoustic Impulse Response Library. Double Fine Adventure! Upload doublefine.com. E Issue 6, 2017 – Hear the Music, Play the Game « G. Issue 6, 2017 – Hear the Music, Play the GameMusic And Game Design: Interplays And Perspectives. Adam Hay - How procedural ambience found it’s way in to Rapture. Product Focus: Immersive Audio. Stereoscopic Media. Audio at Creative Assembly. Board members vote to officially end voice. Composing Music For Video Games - Audient. How does the OSSIC X measure up to competitors? — OSSIC. The OSSIC X is truly delivering breakthrough 3D audio performance. The buzz surrounding it has led some gaming headphones to claim 3D and VR capability for marketing purposes, but when put through the rigorous testing we subject our product to, you can see that they miss the mark, literally.

Over the past month and a half we've continued to refine our internal subjective test processes and tools. The data collected from these tests has allowed us to accurately judge how our tech has been improving day by day. Today we're excited to share some of those results with you. How Much Does It Cost To Develop A- GameCareerGuide.com. Waves Audio Releases B360 Ambisonics Encoder, Nx Ambisonics And 360° Ambisonics Tools - ProSoundWeb. By PSW Staff • October 11, 2017.

Audio Content Examples. Daydream. Mick Gordon Interview - Warren Huart: Produce Like A Pro. Interview with Mick Gordon, composer of DOOM 2016. VR Audio: Crytek goes to new heights for VR game 'The Climb' - Randi Altman's postPerspective. By Jennifer Walden Dealing with locomotion, such as walking and especially running, is a challenge for VR content developers — but what hasn’t been a challenge in creating VR content?

Climbing, on the other hand, has proved to be a simple, yet interesting, locomotion that independent game developer Crytek found to be sustainable for the duration of a full-length game. Crytek, known for the Crysis game series, recently released their first VR game title, The Climb, a rock climbing adventure exclusively for the Oculus Rift. Zombies, Run! Interview: Naughty Dog Audio Team. Mike Bithell talks Thomas Was Alone, his own programming shortcomings and how he gets away with them. Double Fine Adventure! - The making of Broken Age. Super Mario 64 & the Shepherd Tone. Interview: 'Batman: Arkham VR' sound designer Andy Riley. With PlayStation VR out in the UK today, we talk to Rocksteady Studios about the audio elements of the eagerly awaited launch title. It is fair to suggest that Rocksteady Studios has had Batman down to a tee for a while now. The London-based video game developer has thrived off the success of the award-winning Batman: Arkham series since the first title in 2009, and as many companies look to usher in a new technological revolution with the adoption of VR, Rocksteady is ensuring it’s not left behind.