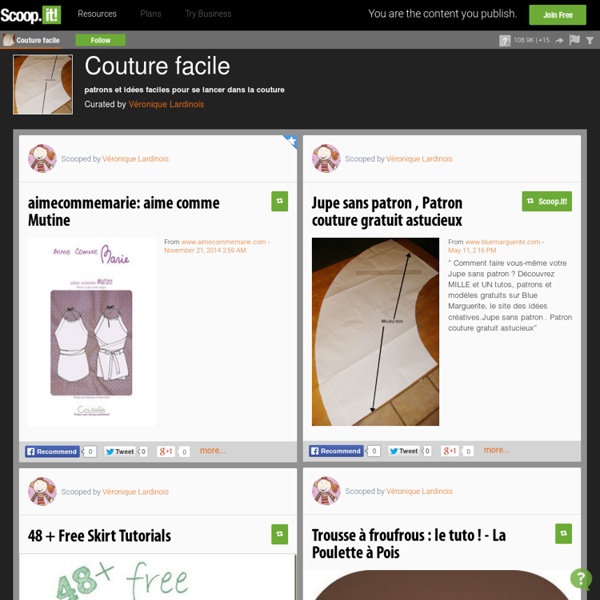 Casserole Carrier in Simple Marks for Moda Fabrics Which dish are you in charge of for this year's holiday celebrations? Will you be whipping up Nana's famous lasagna or maybe a warm pan of apple-cranberry crisp? If your culinary talents are on-the-go this season, you need a carrier that can keep your special dish toasty on the car ride there. Our wrap-it-up design includes a handy loop to clip a pot holder and an inside pocket for a serving utensil. It would make a wonderful combo-gift for the foodies on your list. How to Make Clothing Buttons from Shrink Plastic… This tutorial is an old one of mine that’s too good not to share again. Since posting the first time, I’ve had lots of questions about these buttons which will hopefully be answered in this revised post. Equipment Some handy notes:

Princess & Dragon - Ylenia Manganelli : Cersei Lannister Gown - Costume TUTORIAL and PATTERN #3 Cersei Lannister Dress Cosplay Costume TUTORIAL and PATTERNFIRST AND SECOND SEASON Character: Cersei LannisterVersion: Long sleeves gowns, Season One and Two Cersei Lannister is my favourite character, I love her since the firs-.. ehm, I didn't like her at the beginning. I needed time to understand why she was like she was. She's one of the most complex character of the whole Saga: since she was a child, she grew up as a true lion, strond and conscious of her power, but she was also told it's not right for a woman to be like that, she was told who to marry, what to do. I don't think she's such the evil woman everyone believes; she grew up in a very umpleasant and difficult world in which women aren't allowed to stand up, they can only worship husbands and give them children.

Square(ish) Bottomed Hobo Lunchbag Tutorial Necessity being the mother of invention, I first made this bag because I wanted something that would have all the features of a plastic bag, except I wouldn’t want to throw it out. The features I really wanted were: ability to hold a square container in an upright position, tie-able, light, washable and squishable. Also cute. And so the Square(ish) Bottomed Hobo Lunchbag was born. Materials Needed:- Pattern paper- Ruler- 1/2 yard outer fabric- 1/2 yard lining fabric- matching thread Step One: pattern drafting You need 1 18″ reversible nylon closed zipper2.5 yds. of shell fabric, 60″ wide1.5 yds. of liner fabric, 60″ wideCoordinating thread1 roll of kraft paper or pattern-making papper1 tracing wheel On a sheet of kraft paper, draw a straight line about 2″ from the edge along the length.

Tutorial: Lunch Bag Thank you for encouraging me to write up a tute on this lunch (bento box) bag! I really like this bag pattern because this bag, measuring approximately 9"(width) x 7 1/2"(hight w/o handles) x 5 1/2" (depth), can be used not only for bento boxes of any kind but also for carrying little crafty projects like yarn + needles. It has a cover inside that can give nice privacy for whatever in there and the cover can also prevent it from getting dusty in a windy day. It is much sturdier and larger than the fabric basket, so if you found that your fabric basket was too small or too floppy as a gift bag, this might be a good alternative..?! As usual, I have tons of images to share each step with you, so bare with me! There you go!!

Free Clothes Patterns Posted on | October 9, 2008 | 7 Comments I originally became interested in patternless sewing, many years ago, because I had a hard time finding patterns in my size. Nowadays, patterns in large sizes abound. Nonetheless, I still love my pattern free sewing. These patterns generally of three types. Ultimate List of Free Sewing Patterns A while ago, when I walked along some vintage store in Manchester, I found some vintage sewing pattern. They were mainly from the 60′s and 70′s. If sewing is the language of fashion, the pattern should be the books. It recorded different style according to time. Below, here are some free pattern resources you can find online: BurdaStyle

a craft blog: A Very Simple Bento Bag Tutorial : The Math Hello All ~~ I came across a very, very simple drawstring bento bag pattern; thinking it would be a delightful project to share as a tutorial. However, when the bag was complete, it seemed a bit small, barely fitting my 4.5" square bento box. So I worked on a 'formula' (did I tell you I'm a numbers geek?) to customize a pattern to fit your bento lunch box. Free Skirt Sewing Patterns - over 100 Introducing an EPIC list of free skirt sewing patterns. I KNOW you all love free patterns – its the most searched for area of my site. And you LOVE the Pinterest Group Board where you all share your favorite free sewing patterns. And the Free Dress Patterns List was the biggest traffic generator on the site for weeks after it was published.

ikat sac: faire un sac: Epilogue Last chapter in the epic Make A Bag series! And by "epic", I don't mean "longer than is sane", although that may be true, too. I mean "extolling her heroic attempts to write posts about fabric sacks while the rest of the house fell apart around her and everyone ate takeout pizza and oh, while she was also packing the entire family's summer wardrobe and enough gifts for half the civilized world in preparation for her trip to Singapore to see family, where she's now been soaking up the sun for the past 8 days already but nobody knew because she didn't even have the time to blog about it." Yep - epic. So... let's finish off with some questions that I think you might have.