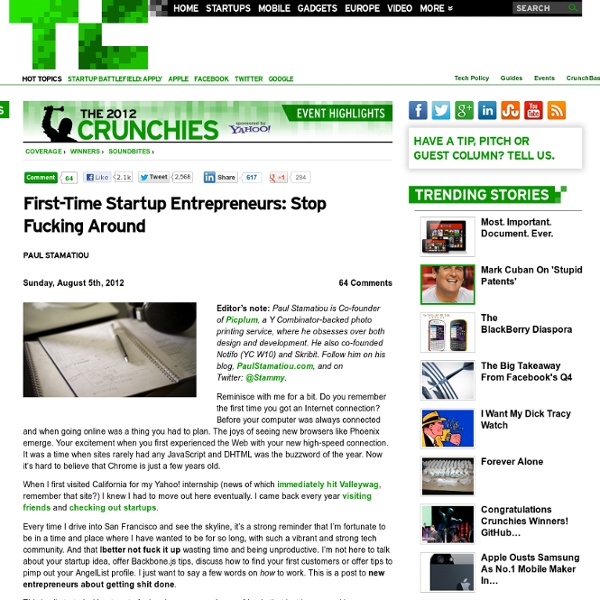 Editor’s note: Paul Stamatiou is Co-founder of Picplum, a Y Combinator-backed photo printing service, where he obsesses over both design and development. He also co-founded Notifo (YC W10) and Skribit. Follow him on his blog, PaulStamatiou.com, and on Twitter: @Stammy. Reminisce with me for a bit. Do you remember the first time you got an Internet connection? Before your computer was always connected and when going online was a thing you had to plan. When I first visited California for my Yahoo! Every time I drive into San Francisco and see the skyline, it’s a strong reminder that I’m fortunate to be in a time and place where I have wanted to be for so long, with such a vibrant and strong tech community. This is all started with a tweet of mine. i’m going to teach a course for first-time startup entrepreneurs called stop fucking around and get back to work.— Paul Stamatiou (@Stammy) April 23, 2012 We are in an amazing time right now — perhaps the perfect time to build companies.

Marc Andreessen Says Now's the Time to Build Companies Like It's 1999 - Arik Hesseldahl Few people have the perspective of living and working in the tech industry that venture capitalist Marc Andreessen has. Founder of the browser company Netscape and then of the software company LoudCloud, later renamed Opsware, he’s seen the boom and bust cycles and the shrill choruses of hype (tempered by reality) that go with them. Now, as one of the two primary partners in the venture capital fund Andreessen Horowitz, he’s playing the completely different role of shepherding what he hopes are the next great tech companies. Andreessen (pictured from a legendary Time Magazine cover on which he appeared in the late 1990s) was the first speaker today at Fortune Magazine’s Brainstorm Tech conference being held in a very rainy — but still beautiful — Aspen, Colo. Asked by interviewer Andy Serwer what he’s excited about right now, Andreessen looked back. From there he pivoted to an argument that the consumer electronics industry is coming back to the U.S.

What Startups Should Do Before They Get Into The VC’s Office This is a guest post by Eze Vidra, Head of Campus London, Google’s dedicated startup space in East London housing accelerators and co-working spaces. He tweets at @ediggs and blogs at VCCafe.com. An experienced VC would have heard thousands of pitches in his day. The good ones would tell you that they have developed a “pattern recognition”. After a while, they are able to determine (at least in their own minds) what startups would succeed or fail in a matter of minutes. There’s obviously lots going on in a pitch – verbal and non-verbal communication, chemistry etc. 12 Rules For Building Your First Profitable Startup I’ve been obsessed with Internet Startups for almost a decade now, and I still find myself consuming as much content as possible about the best way to startup a company that is setup for success. As luck would have it, I am actually running a profitable startup now, so I figured I would assemble a set of rules I wish someone had given me when I was trying to start my first few companies. Now, I know for every rule in this list, you can name exceptions. I get that. And I don’t care. This list is for someone looking to start their first Internet Startup who is interested in bootstrapping a reliably profitable company that can then open the door to the next big project.

Dollar Shave Club Launches Razor Subscription Service, Raises $1M From Kleiner (And Others) There are few things in my life that seem less exciting than razors, but a new startup called The Dollar Shave Club thinks it’s time for a little disruption. And some of the big names in the venture world, including Kleiner Perkins Caufield & Byers and Andreessen Horowitz, are backing its vision. Dollar Shave Club was first founded in April 2011 by Michael Dubin and Mark Levine, and it’s relaunching today and announcing that it’s the latest company to emerge from Science, Inc., the incubator whose partners include former MySpace CEO Mike Jones and Color co-founder Peter Pham. The basic model is simple — at pricing that starts at $1 per month (plus $2 for shipping and handling), customers get a monthly shipment of razors delivered to their home.

Seth Goldstein: 10 tweets for startups Seth Goldstein broke his advice for entrepreneurs down into 140-character bites. Seth Goldstein, investor, serial entrepreneur and chairman of Turntable.fm, prefers to tweet his advice. He gave the crowd at KANEKO his top 10 tips for entrepreneurs in under 140 characters — plus this more lengthy challenge to create something different. "I think your ideas should be strange and weird and nonsensical," Goldstein said. How to Make Wealth May 2004 (This essay was originally published in Hackers & Painters.) If you wanted to get rich, how would you do it? I think your best bet would be to start or join a startup.

Mad Libs For Pitches: How To Perfect The One Sentence Pitch You’re the founder of a fledgling startup locked in a room with angel investor Ron Conway for exactly 30 seconds, what do you say? If you’re like most entrepreneurs, you fumble for the words to succinctly describe your startup in a sentence or two. That seems simple enough, what could go wrong in under a minute? According to the Founder Institute’s Adeo Ressi: a lot. When it comes to the one sentence pitch, Ressi says “Most entrepreneurs manage to screw it up… How much better would the world be if every startup could explain their business well in one sentence?” To help entrepreneurs perfect the art of the micro pitch, he’s created a rudimentary template in Mad Libs style:

The Dirty Little Secret Of Overnight Successes As Chris Dixon pointed out in a recent blog post, Angry Birds, the incredibly popular game, was software maker Rovio’s 52nd attempt. They spent eight years and nearly went bankrupt before finally creating their massive hit. James Dyson failed in 5,126 prototypes before perfecting his revolutionary vacuum cleaner. Stop producing shit A friend of mine is starting what can only be described as a combination of Facebook, Groupon, LinkedIn and Foursquare. He’s super excited and hasn’t talked to any potential customers yet. I know a guy whose startup pivots twice a year, each time hoping to solve a problem that’s not really there. Now they’re cloning Yammer.

» Early stage companies don’t need money, they need customers Note: This is cross posted from WhoYouCallingAJesse.com by Jesse Rodgers, who is a cofounder of TribeHR. He has been a key member of the Waterloo startup community hosting StartupCampWaterloo and other events to bring together and engage local entrepreneurs. Follow him on Twitter @jrodgers or WhoYouCallingAJesse.com. Some rights reserved by wallyg Read What Facebook’s Sandberg Calls Maybe ‘The Most important Document Ever To Come Out Of The Valley’ Facebook’s No. 2 top dog, COO Sheryl Sandberg, recently said that Netflix’s company culture document “may well be the most important document ever to come out of the Valley.” The document, a bullet-point-happy PowerPoint, has become a cultural manifesto for the Internet’s economic epicenter, amassing over 3.2 million views on Slideshare.net. More than simply a management guide, it’s a window into a philosophy that thrives on uncertainty, creativity, and trust — a blinding contrast to the hierarchical culture that dominated much of the 20th century workplace. To the extent that innovation and the Internet play a role in the modern workplace, it is a crystal ball into the future of daily life. We’ve summarized the most telling principles below: Creativity is Most Important