7 Basic Things You Won't Believe You're All Doing Wrong. If you're like us, you might sometimes have a problem with complex tasks, like trying to drive an ambulance and send a text message at the same time. 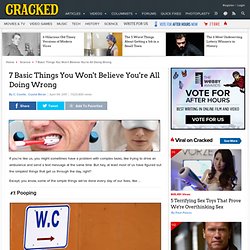 But hey, at least most of us have figured out the simplest things that get us through the day, right? Except, you know, some of the simple things we've done every day of our lives, like ... What could be simpler than taking a good crap? Even babies are good at it. You might be surprised, then, to find out that even those of us who can burp without throwing up get this wrong every single day. The one who just threw up on the other one's shoulder is better at pooping. Chances are the pooping facility nearest you is a sitting toilet, a relatively recent invention that flushed its way into mankind's heart with the advent of indoor plumbing in the 19th century.

GettyFuture toilets will exist just to kill us. So how the hell are we meant to do it? Luckily, there's a relatively simple way to end this poop dilemma. GettyDemonstrated here.

5 Mind Blowing Ways Your Memory Plays Tricks On You. Everybody will tell you that memory can't be trusted. 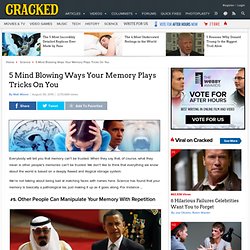 When they say that, of course, what they mean is other people's memories can't be trusted. We don't like to think that everything we know about the world is based on a deeply flawed and illogical storage system. We're not talking about being bad at matching faces with names here. Science has found that your memory is basically a pathological liar, just making it up as it goes along. For instance ... Other People Can Manipulate Your Memory With Repetition There was quite a stir recently when it turned out that a growing number of people believe the President of the USA is a Muslim.

But according to the Pew Research Center, for almost 20% of the people they polled, those memories have been trumped by the mere act of hearing commentators assert that Obama is a Muslim, over and over and over. Obama, posing with a statue of the famed Imam Ali bin Superman. They call it the "Illusion of Truth" effect. "Who would fake something like that? " 6 Mind-Blowing Ways Genetic Engineering Might Save Your Life. Genetic engineering scares a lot of people, partly because we love making sci-fi movies and video games starring walking humanoid horrors that resulted from experiments gone wrong. 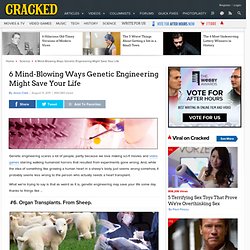 And, while the idea of something like growing a human heart in a sheep's body just seems wrong somehow, it probably seems less wrong to the person who actually needs a heart transplant. What we're trying to say is that as weird as it is, genetic engineering may save your life some day thanks to things like ... #6. Organ Transplants. From Sheep. Getty. 7 Insane Ways Music Affects The Body (According to Science) The world is chock full of ear hurt that some people willingly refer to as music. 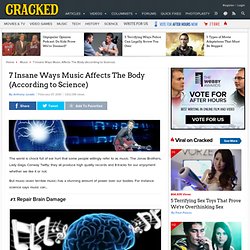 The Jonas Brothers, Lady Gaga, Conway Twitty; they all produce high quality records and 8-tracks for our enjoyment whether we like it or not. But music--even terrible music--has a stunning amount of power over our bodies. For instance science says music can... Slapping neuroscience right across the face, music is able to take stroke, lesion or other brain-damaged patients who have lost the partial ability to see or speak and return it to them. The Kenny Rogers Effect--not named because it deals with gorging yourself on chicken or replacing your old, grandfatherly face with a shiny new rubber one--takes patients with visual neglect, the inability to recognize half of what they see, and lightens the effects of the damage. 10 Transformational and Spiritual Aphorisms. Throughout the ages, there have been many who have transcended the domain of the ego and had gotten a taste of those delicious higher states of consciousness.

Rather than keep their experiential knowledge and wisdom about the higher aspects of existence to themselves, they spread the word to others, be it through spoken word, written works, or other methods. Thanks to the sages, spiritual teachers, and every-day people who had an enlightening experience, we can ignite the light of expanded awareness concerning the higher aspects of the human experience and of existence itself from such people. There are an untold amount of such spiritual aphorisms to be enjoyed by our higher selves so we will take a look at 10 such aphorisms. May these timeless words nourish your mind and soul. Aphorism 1. RE/Programming Trinity.