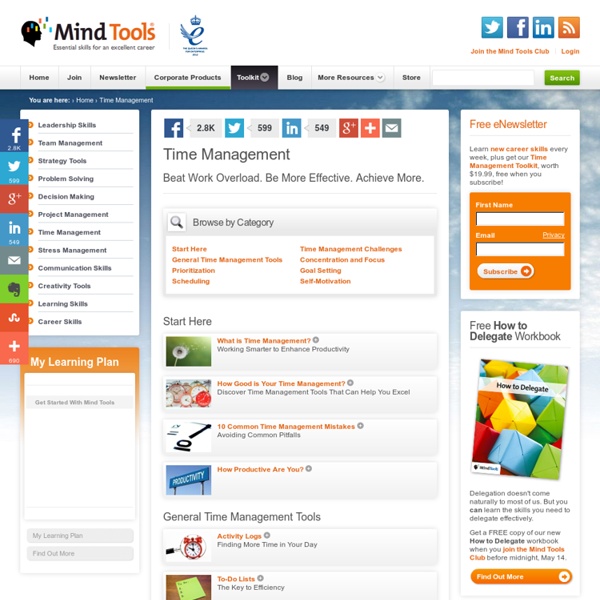 Beat Work Overload. Be More Effective. Achieve More. Start Here General Time Management Tools Leverage Achieving Much More With the Same Effort Prioritization Scheduling Time Management Challenges Concentration and Focus In Flow Maximizing Productivity Through Improved Focus Goal Setting Self-Motivation Free How to Delegate Workbook Delegation doesn't come naturally to most of us. Get a FREE copy of our new How to Delegate workbook when you join the Mind Tools Club before midnight, May 14. Find Out More Return to the top of the page

Consumer Warnings Report We are not affiliated in any way with any news organization. This is an advertisement for Internet Profit Packet. It is important to note that this site and the stories and even images (including check) depicted above is to be used as an illustrative example of what some individuals have achieved with this/these products. This website, and any page on the website, is based loosely off a true story, but has been modified in multiple ways including, but not limited to: the story, the photos, and the comments.

10 Common Time Management Mistakes - from Mind Tools.com Avoiding Common Pitfalls Learn how to overcome several common time management mistakes. How well do you manage your time? If you're like many people, your answer may not be completely positive! Perhaps you feel overloaded, and you often have to work late to hit your deadlines.

How to Make Good Decisions ... Faster Take a look at this paragraph: Cna yuo raed tihs? I cdn'uolt blveiee taht I cluod aulaclty uesdnatnrd waht I was rdanieg. OccupyWriters.com Thirteen Observations made by Lemony Snicket while watching Occupy Wall Street from a Discreet Distance 1. If you work hard, and become successful, it does not necessarily mean you are successful because you worked hard, just as if you are tall with long hair it doesn’t mean you would be a midget if you were bald. 2. Tools for Decision Analysis Tools for Decision Analysis:Analysis of Risky Decisions Para mis visitantes del mundo de habla hispana, este sitio se encuentra disponible en español en: Sitio Espejo para América Latina Sitio en los E.E.U.U.Making decisions is certainly the most important task of a manager and it is often a very difficult one. This site offers a decision making procedure for solving complex problems step by step.It presents the decision-analysis process for both public and private decision-making, using different decision criteria, different types of information, and information of varying quality. It describes the elements in the analysis of decision alternatives and choices, as well as the goals and objectives that guide decision-making. The key issues related to a decision-maker's preferences regarding alternatives, criteria for choice, and choice modes, together with the risk assessment tools are also presented.To search the site, try Edit | Find in page [Ctrl + f].

Locksmiths Blog » How to pick a lock with a business card May 4, 2011 Image Source The impressive multi-functional business card you see above belongs to “Melvin,” a hacker who decided some years ago to design a piece of business identification that was both appropriate and unique. He scored on both fronts, but most impressive is the card’s dual purpose: as well as providing contact info for clients, the card can be easily dismantled – each individual tool can be popped out and detached – and cleverly used as a lock-picking kit. It’s a great idea.

Confessions of a Car Salesman - How to Buy a New Car Don't bother dangling that "all cash" offer to a salesman. He doesn't care. We make less money on cash deals. We make more money on the financing and get the money from the bank within the same time-frame. But no matter what the deal looks like, it's the hardcore hagglers that get the best prices. There are definitely those "grinders" that come into the store—people who will keep you in the process, chiseling the price of the car down and asking you to throw in some perks on top of it. Elton Mayo and Hawthorne Effect - Studies in Motivation The Hawthorne Studies (also knowns as the Hawthorne Experiments) were conducted from 1927 to 1932 at the Western Electric Hawthorne Works in Cicero, Illinois (a suburb of Chicago). This is where Harvard Business School professor Elton Mayo and Fritz Roethlisberger examined the impact of work conditions in employee productivity. Elton Mayo started these experiments by examining the physical and environmental influences of the workplace (e.g. brightness of lights, humidity) and later, moved into the psychological aspects (e.g. breaks, group pressure, working hours, managerial leadership) and their impact on employee motivation as it applies to productivity. In essence, the Hawthorne Effect, as it applies to the workplace, can be summarized as "Employees are more productive because the employees know they are being studied." Additionally, the act of measurement, itself, impacts the results of the measurement. The Hawthorne Experiments and Employee Motivation

Introduction to Principles of Management Figure 1.1 The restaurant industry poses many challenges to the successful management of individuals and groups. Chapter Learning Objectives Reading this chapter will help you do the following: Learn who managers are and about the nature of their work.