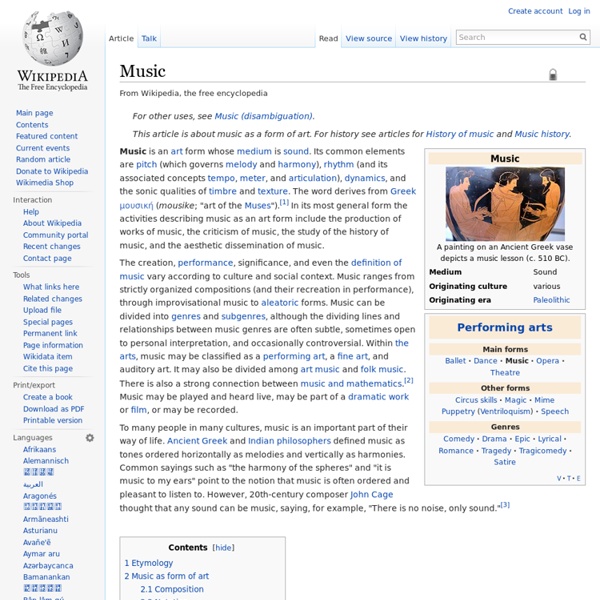 This article is about music as a form of art. For history see articles for History of music and Music history. The creation, performance, significance, and even the definition of music vary according to culture and social context. Music ranges from strictly organized compositions (and their recreation in performance), through improvisational music to aleatoric forms. Music can be divided into genres and subgenres, although the dividing lines and relationships between music genres are often subtle, sometimes open to personal interpretation, and occasionally controversial. Within the arts, music may be classified as a performing art, a fine art, and auditory art. To many people in many cultures, music is an important part of their way of life. Etymology The word derives from Greek μουσική (mousike; "art of the Muses").[4] Music as form of art Jean-Gabriel Ferlan performing at a 2008 concert at the collège-lycée Saint-François Xavier Composition Notation Play Improvisation Theory History

Musical instrument A musical instrument is a device created or adapted to make musical sounds. In principle, any object that produces sound can be a musical instrument—it is through purpose that the object becomes a musical instrument. The history of musical instruments dates to the beginnings of human culture. Early musical instruments may have used for ritual: such as a trumpet to signal success on the hunt, or a drum in a religious ceremony. Love For information about showing love on Wikipedia, see WP:LOVE and WP:♥. Love in its various forms acts as a major facilitator of interpersonal relationships and, owing to its central psychological importance, is one of the most common themes in the creative arts.[8] Love may be understood as a function to keep human beings together against menaces and to facilitate the continuation of the species.[9] Definitions The word "love" can have a variety of related but distinct meanings in different contexts. Many other languages use multiple words to express some of the different concepts that in English are denoted as "love"; one example is the plurality of Greek words for "love" which includes agape and eros.[10] Cultural differences in conceptualizing love thus doubly impede the establishment of a universal definition.[11]

Semantic Web The Semantic Web is a collaborative movement led by international standards body the World Wide Web Consortium (W3C).[1] The standard promotes common data formats on the World Wide Web. By encouraging the inclusion of semantic content in web pages, the Semantic Web aims at converting the current web, dominated by unstructured and semi-structured documents into a "web of data". The Semantic Web stack builds on the W3C's Resource Description Framework (RDF).[2] According to the W3C, "The Semantic Web provides a common framework that allows data to be shared and reused across application, enterprise, and community boundaries".[2] The term was coined by Tim Berners-Lee for a web of data that can be processed by machines.[3] While its critics have questioned its feasibility, proponents argue that applications in industry, biology and human sciences research have already proven the validity of the original concept. History[edit]

Musical instrument classification At various times, and in various cultures, various schemes of musical instrument classification have been used. The most commonly used system in use in the west today divides instruments into string instruments, woodwind instruments, brass instruments and percussion instruments. However other ones have been devised, and some cultures also use different schemes. Brazilian jiu-jitsu Brazilian jiu-jitsu (/dʒuːˈdʒɪtsuː/; Portuguese: [ˈʒiw ˈʒitsu], [ˈʒu ˈʒitsu], [dʒiˈu dʒiˈtsu]) (BJJ; Portuguese: jiu-jitsu brasileiro) is a martial art, combat sport, and a self defense system that focuses on grappling and especially ground fighting. Brazilian jiu-jitsu was formed from Kodokan Judo ground fighting (newaza) fundamentals that were taught by a number of individuals including Takeo Yano, Mitsuyo Maeda and Soshihiro Satake. Brazilian jiu-jitsu eventually came to be its own art through the experiments, practices, and adaptation of the judo knowledge of Carlos and Hélio Gracie, who then passed their knowledge on to their extended family. History[edit] Origins[edit] Geo Omori opened the first jujutsu / judo school in Brazil in 1909. [5] He would go on to teach a number of individuals including Luiz França.

SNOMED Clinical Terms - Summary SNOMED CT has been created by combining SNOMED RT and a computer-based nomenclature and classification known as Read Codes Version 3, which was created on behalf of the U.K. Department of Health and is a Crown copyright. SNOMED CT Concept (SNOMED RT+CTV3) SNOMED CT January 2005 Release: 20050131 [R] List of musical instruments The following is a list of musical instruments, categorized by section. This includes the variations of categories, but not the categories themselves. Example: There are eight types of flutes in the Western concert flute category, which are all metal. Therefore there are eight instruments listed in that category but the Western concert flute is not considered a musical instrument and is not listed in the count of instruments.

Buddhism World religion founded by the Buddha Buddhism (, ) is the world's fourth-largest religion[3] with over 520 million followers, or over 7% of the global population, known as Buddhists.[6] Buddhism encompasses a variety of traditions, beliefs and spiritual practices largely based on original teachings attributed to the Buddha (born Siddhārtha Gautama in the 5th or 4th century BCE) and resulting interpreted philosophies. It originated in ancient India as a Sramana tradition sometime between the 6th and 4th centuries BCE, spreading through much of Asia. Two major extant branches of Buddhism are generally recognized by scholars: Theravāda (Pali: "The School of the Elders") and Mahāyāna (Sanskrit: "The Great Vehicle"). Theravada Buddhism has a widespread following in Sri Lanka and Southeast Asia such as Cambodia, Laos, Myanmar and Thailand. Mahayana, which includes the traditions of Pure Land, Zen, Nichiren Buddhism, Shingon and Tiantai (Tendai), is found throughout East Asia.

Ontology (information science) In computer science and information science, an ontology formally represents knowledge as a hierarchy of concepts within a domain, using a shared vocabulary to denote the types, properties and interrelationships of those concepts.[1][2] Ontologies are the structural frameworks for organizing information and are used in artificial intelligence, the Semantic Web, systems engineering, software engineering, biomedical informatics, library science, enterprise bookmarking, and information architecture as a form of knowledge representation about the world or some part of it. The creation of domain ontologies is also fundamental to the definition and use of an enterprise architecture framework. The term ontology has its origin in philosophy and has been applied in many different ways. The word element onto- comes from the Greek ὤν, ὄντος, ("being", "that which is"), present participle of the verb εἰμί ("be").

Wind instrument Methods for obtaining different notes[edit] Almost all wind instruments use the last method, often in combination with one of the others, to extend their register. Types of wind instruments[edit] 5 Minute Introduction • What is Buddhism? Buddhism is a religion to about 300 million people around the world. The word comes from 'budhi', 'to awaken'.