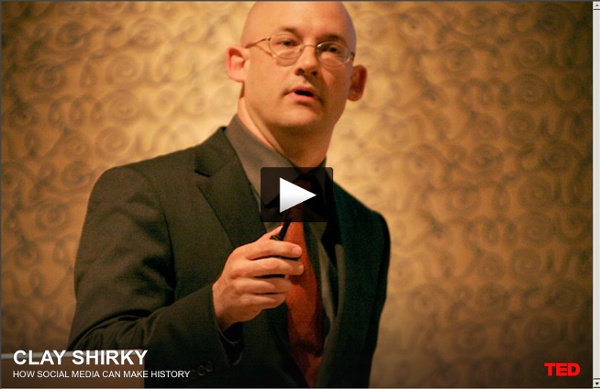 In praise of cooperation without coordination: Clay Shirky at TEDGlobal 2012 Amy Cuddy must be proud: Clay Shirky walks on stage and promptly strikes a power pose. Then he tells us of a 9-year-old Scottish girl who lives about 50 miles from here. Martha Payne started the foodblog NeverSeconds, for which she took her camera into school to document her lunches, using metrics such as “pieces of hair found in food.” First, she acquired dozens, then hundreds, then thousands of readers.

The Transparent Society Synopsis[edit] David Brin with sousveillance "maybecamera" at the Association of Computing Machinery's (ACM's) CFP conference where such a sousveillance device was given to each attendee. Brin participated in the Opening Keynote on the "inverse panopticon". Brin argues that a core level of privacy—protecting our most intimate interactions—may be preserved, despite the rapid proliferation of cameras that become ever-smaller, cheaper and more numerous faster than Moore's law. He feels that this core privacy can be saved simply because that is what humans deeply need and want.

s March 2011 Trend Briefing covering R.A.K. The INTERNET OF CARING THINGS means connected objects that serve consumers' most important needs: physical and mental wellbeing, safety, security, oversight of loved ones, and more. You're probably already familiar with the innovations that have blazed an early CARING trail. The Nest smart thermostat*, NIKE fuelband and Fitbit, for example. SEO Keyword Graph Visualization Use this free Java application to explore the connections between related websites. Try it now! Enter keywords or a URL, and click 'Graph it!' Mapping GitHub – a network of collaborative coders GitHub is a large community where coders can collaborate on software development projects. People check code in and out, make edits, etc. Franck Cuny maps this community (with Gephi), based on information in thousands of user profiles. The above is a map colored and sorted by the main language of each person (PHP, Python, Perl, Javascript, or Ruby).

Religion May Cause Brain Atrophy Faith can open your mind but it can also cause your brain to shrink at a different rate, research suggests. Researchers at Duke University Medical Centre in the US claim to have discovered a correlation between religious practices and changes in the brains of older adults. The study, published in the open-access science journal, Public Library of Science ONE, asked 268 people aged 58 to 84 about their religious group, spiritual practices and life-changing religious experiences. Changes in the volume of their hippocampus, the region of the brain associated with learning and memory, were tracked using MRI scans, over two to eight years. Protestants who did not identify themselves as born-again were found to have less atrophy in the hippocampus region than did born-again Protestants, Catholics or those with no religious affiliation. Although the brain tends to shrink with age, atrophy in the hippocampus has been linked with depression and Alzheimer's disease.

Continuous Partial Attention What is continuous partial attention? Continuous partial attention describes how many of us use our attention today. It is different from multi-tasking. The two are differentiated by the impulse that motivates them. When we multi-task, we are motivated by a desire to be more productive and more efficient. We’re often doing things that are automatic, that require very little cognitive processing.