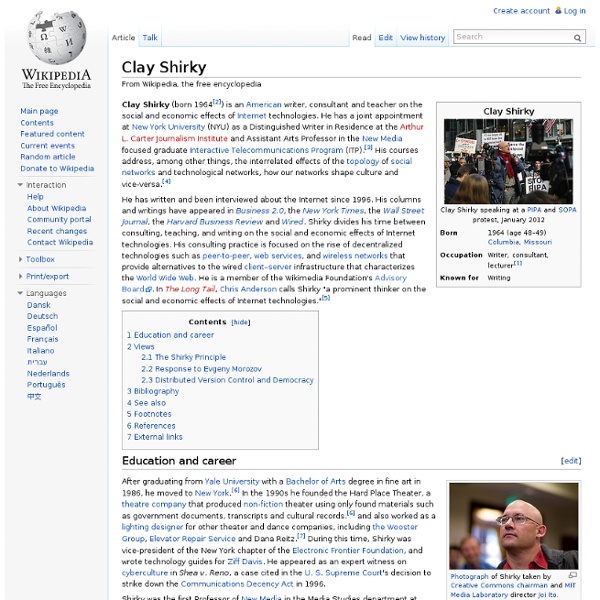 Clay Shirky (born 1964[2]) is an American writer, consultant and teacher on the social and economic effects of Internet technologies. He has a joint appointment at New York University (NYU) as a Distinguished Writer in Residence at the Arthur L. Carter Journalism Institute and Assistant Arts Professor in the New Media focused graduate Interactive Telecommunications Program (ITP).[3] His courses address, among other things, the interrelated effects of the topology of social networks and technological networks, how our networks shape culture and vice-versa.[4] Education and career[edit] Shirky was the first Professor of New Media in the Media Studies department at Hunter College, where he developed the MFA in Integrated Media Arts program. In the Fall of 2010, Shirky was a visiting Morrow Lecturer at Harvard University's John F. Views[edit] In his book Here Comes Everybody, Shirky explains how he has long spoken in favor of crowdsourcing and collaborative efforts online. [edit]

Secrecy Is the Key to the Next Phase of Social Networking | Wired Design Secret co-founders David Byttow and Chrys Bader want to create a more authentic internet. Image: Secret Over the past week, I’ve been getting a steady stream of push notifications alerting me that another one of my friends has joined the new social media app Secret. “Who could it be?” my screen asks each time, which is less an actual question and more an attempt to pique my curiosity. This is, of course, is the whole point of the app. Deep down we all want it, but earnestness on social media is embarrassing. Like Facebook and Twitter, Secret’s declared purpose is to connect people. It’d be easy to call the rash of anonymity-based apps a direct backlash to Facebook, but that isn’t quite right. A Safe Space for Squishy Feelings Authenticity on the web is a slippery idea. But Bader and Byttow like to believe there’s a place for a more authentic web, and they hope Secret will give rise to it. A secret someone in my circle shared. Unintended Uses

Connaxions Jan Chipchase Jan Chipchase is the Executive Creative Director of Global Insights at Frog Design, leading the firm’s global research practice in both mainstream and emerging markets.[1] Before joining Frog Design in 2010, Chipchase was Principal Scientist at Nokia, based out of Tokyo but frequently traveling.[2] The goal of his research was to understand the ways technology works in different cultures, with a focus on understanding technology 3 to 15 years out. out. He mostly consults for Fortune 500 companies and their local equivalents. Most of Chipchase's research is commissioned by commercial clients and confidential. He has lived in London, Berlin, San Francisco, Shanghai, Los Angeles, and almost a decade in Tokyo. Early life and education[edit] Chipchase was born in London to a German mother and British father. Chipchase received a BA in Economics and a MSc in User Interface Design from London Guildhall University.[6] He has described himself as a "failed economist" and a "failed academic".

Mass amateurization Mass amateurization refers to the capabilities that new forms of media have given to non-professionals and the ways in which those non-professionals have applied those capabilities to solve problems (e.g. create and distribute content) that compete with the solutions offered by larger, professional institutions.[1] Mass amateurization is most often associated with Web 2.0 technologies. These technologies include the rise of blogs and citizen journalism, photo and video-sharing services such as Flickr and YouTube, user-generated wikis like Wikipedia, and distributed accommodation services such as Airbnb. While the social web is not the only technology responsible for the rise of mass amateurization, Clay Shirky claims Web 2.0 has allowed amateurs to undertake increasingly complex tasks resulting in accomplishments that would seem daunting within the traditional institutional model. There is no institutional hierarchy in mass amateurization. Background[edit] Clay Shirky History[edit]

Bowling Alone You Need To See This 17-Minute Film Set Entirely On A Teen's Computer Screen These words are probably unfurling inside one of many open tabs on your computer screen. Perhaps one tab is for work, one is for chatting, and another is for Twitter. You probably even have some others open for no particular reason. The 17-minute, mildly NSFW Noah is unlike anything you've seen before in a movie—only because it is exactly like what many of us see on our computers all the time. From the desktop photo of a young couple posing for the camera, we learn that Noah has a girlfriend. Lending the project authenticity is the filmmakers' attention to detail. Lest you think that watching some couple Skype sounds boring, though, this thing moves at the speed of an ADD-afflicted hummingbird, zooming in on key pieces of information as Noah learns them, before zipping off to follow what he does with the new intel. While the creators of the video figure out the next phase of its distribution, we are temporarily ceasing our stream of the film in this post.

who’s the architect parked in front of my computer, probably tweeting. :) Welcome fellow travelers, visionaries, and agents of change! This is a blog exploring the co-evolution of humanity and our technologies. I started writing here back in 2009 while I was working on my MA in Media Studies at the New School in NYC. My passion has been in watching what is happening at the intersection of technology, communication and culture – how people are using the web and peer-to-peer technology to more effectively self-organize, collaborate, build community, and accelerate social innovation. I feel that we are a global society in transition. New models are being created for open collaboration and open enterprise, for complementary and alternative currencies, for governance, and for spirituality and empowerment. I am scouting the edges of technology and innovation, right where the magic happens. Thanks for joining me on the journey. - Venessa Here are a few projects I’ve been working on: finnish translation Like this:

Jeff Jarvis Jeff Jarvis (born July 15, 1954) is an American journalist, professor, public speaker and former television critic. He advocates the Open Web[1] and argues that there are many social and personal benefits to living a more public life on the internet.[2] Career[edit] Jarvis began his career in journalism in 1972 writing for the Addison Herald-Register, a local weekly newspaper at which he was the sole journalist.[3] In 1974 Jarvis was an undergraduate in the Medill School of Journalism at Northwestern University when he was hired by the Chicago Tribune.[4] He completed his degree and holds a BSJ from Northwestern.[5] Jarvis is former Sunday editor and associate publisher of the New York Daily News and a former columnist for the San Francisco Examiner. He has a fortnightly column in the MediaGuardian supplement of the British newspaper The Guardian. Jeff Jarvis, 2008. Books[edit] In 2009, Jarvis wrote a book called, What Would Google Do? Politics[edit] Personal life[edit] References[edit]

BBC Radio 4 - Do I Have a Right to Be Forgotten? The Culture of the Internet I’ve been thinking a lot about Internet culture lately. Or, rather, the culture *of* the Internet. A peculiar chain of events unfolded on Twitter a couple nights ago. I sent my followers a link to a hilarious sendup of Internet comment culture, a music video spoof called “We Didn’t Start the Flamewar.” Then I made the tragic mistake of mentioning, in a subsequent tweet, that that song’s lyrics mentioned something I hadn’t heard of: Rickrolling. My followers’ scorn poured down like rain. Rickrolling (as *everyone* knows, obviously) is an Internet prank where you send a Web link to someone, promising something exciting—but you’ve actually linked to a YouTube video of Rick Astley’s 1987 music video, “Never Gonna Give You Up” ( (Eventually, Astley himself Rickrolled the entire viewership of the Macy’s Thanksgiving parade last year, live on TV, as you can see here: So how could I have missed it? But the episode got me thinking about Internet culture.

Feldenkrais-Praxis Ulrike Springer, Luzern Pierre Lévy Pierre Lévy (Tunis, 1956) is a French philosopher, cultural theorist and media scholar who specializes in the understanding of the cultural and cognitive implications of digital technologies and the phenomenon of human collective intelligence. He introduced the collective intelligence concept in his 1994 book L'intelligence collective: Pour une anthropologie du cyberspace (Collective Intelligence: Mankind's Emerging World in Cyberspace).[1] Lévy's 1995 book, Qu'est-ce que le virtuel? (translated as Becoming Virtual: Reality in the Digital Age) develops philosopher Gilles Deleuze's conception of "the virtual" as a dimension of reality that subsists with the actual but is irreducible to it. In 2001, he wrote the book Cyberculture. Pierre Lévy currently teaches at the communication department of the University of Ottawa (Canada),[2] where he holds a Canada Research Chair in Collective Intelligence. Life and work[edit] Current project[edit] Awards[edit] University degrees[edit] References[edit]