Simple Ideas That are Awesome 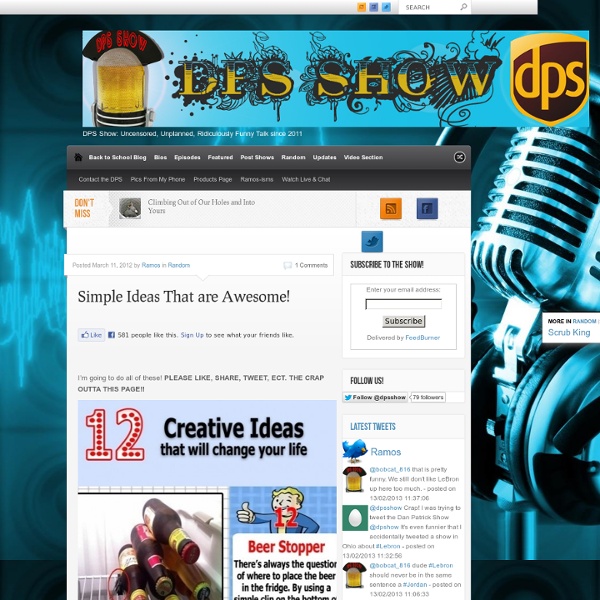 How To Mix Chalkboard Paint in Any Color We love using chalkboards as backdrops for displays and parties (like this one here!). So we were super excited to learn that you can create your own custom colors-and it's really easy! We first learned how from Martha Stewart whose tutorial you can read here. She recommends that you use latex paint, but we tried it out with acrylic paints with much success. Here's how you too can create your own chalkboard paint... Supplies: 1/2 cup acrylic paint (choose any color you like, or mix colors together to make the perfect shade!)

The INTIMIDATOR Puzzle Pistol- Page 5 The barrel is a modified Green Mountain 45 caliber rifled 1:20 Twist .009" Groove Octagon barrel (left), the breach plug with gun grease on threads (right front) and the bronze barrel reinforcement bushing (right rear). The barrel fully assembled. The Resurrection - 7 Proofs Of The Resurrection Of Jesus Christ By Jack Zavada Is the resurrection of Jesus Christ an historical event that really happened, or is it only a myth, as many atheists claim? While no one witnessed the actual resurrection, many people swore they saw the risen Christ after his death, and their lives were never the same. Archaeological discoveries continue to support the Bible's historical accuracy. We tend to forget that the Gospels and book of Acts are eyewitness accounts of the life and death of Jesus.

71 Things You Can Do by Scott Hughes Most people aren't Warriors, and I'm fine with it. Most people do things that don't make sense, and I'm fine with it. I've learned to accept the non-sense that fills this world. (Part of being a Warrior is accepting that most other people are not Warriors, and accepting them.) Still, the point is that people do things that don't make sense. 30 Fabulous Reuses & Repurposes for Old or Recalled Cribs With new crib regulations, the resale of cribs is going to be pretty non-existent for a while. But don't you worry!! You don't have to use that crib for summer campfires! We've scoured the web for some cool tutorials and ideas for reusing old or recalled cribs!

Preserving Fruit Flavors in Alcohol: Homemade Liqueurs When we discuss food preservation, we are usually talking about canning, dehydrating, freezing or fermenting. But did you know that you can also preserve fruit in alcohol, such as brandy or vodka? It is a way of preserving the flavor or essence of the fruit for later use. This method consists of steeping fresh or frozen fruit in alcohol for several weeks. In the end, you end up with some “drunken fruit” (good as a dessert topping) and a flavorful alcohol that can be used to make dazzling cocktails, punch, deserts or sauces. But if you take it a step further and add a little sugar syrup to the mix , you now have delicious homemade liqueur!

Collection of Awesome Things (63 pics) Dec 14/11 Collection of Awesome Things (63 pics) Another collection of some very creative and awesome stuff. Which one of this would you like for Christmas? - StumbleUpon Why didnâ€™t I think of that? Youâ€™ll be uttering those words more than once at these ingenious little tips, tricks and ideas that solve everyday problems... some you never knew you had! Hull strawberries easily using a straw.

Friendship Bracelets Macraméd friendship bracelets were all the rage when I was growing up in the eighties. All the girls at my school would obsessively make them for one another in a dizzying variety of colors, widths, and patterns. It's amazing, thinking back, that such young girls could make such beautifully intricate accessories. I, of course, tried my hand at making them as well. World's first vertical forest Architecture Bosco Verticale, the vertical forest, is a project by Stefano Boeri that's being realised in Milan. It is a flat with deep balconies where trees can grow. The 27 stories high building will become a stunning feature of the Milanese skyline. Here are several concept drawings of the building and photos of the constructions site.

ODDMAN.CA - StumbleUpon And then it hits you. ‘Nuff said on this one. You’ll see.It’s just a strange kind of mash today. There’ really isn’t any theme except for the madness that we run across every day. Holder for Charging Cell Phone (made from lotion bottle) My husband and I both have cell phones. And both of us have phone chargers. And that means lots of obnoxious cords. You never know when one of us may be moving phone cords around, to give our phones an extra charge while we’re chatting away……… or trying to charge our phones up before running errands or something.