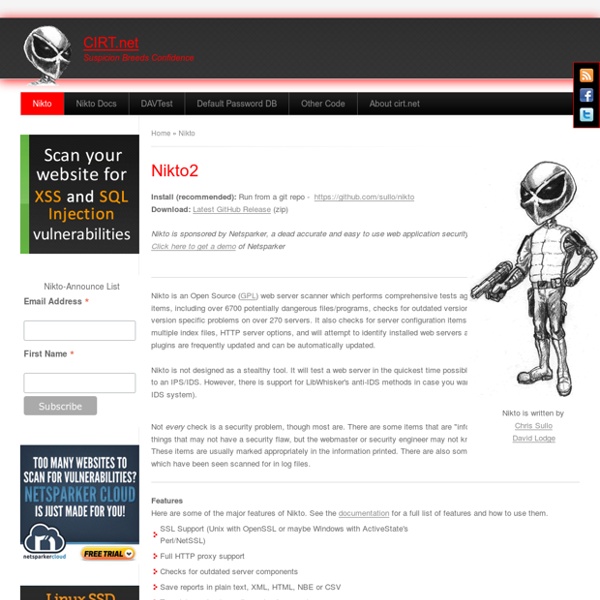 Nikto is sponsored by Netsparker, a dead accurate and easy to use web application security solution. Nikto is an Open Source (GPL) web server scanner which performs comprehensive tests against web servers for multiple items, including over 6700 potentially dangerous files/programs, checks for outdated versions of over 1250 servers, and version specific problems on over 270 servers. It also checks for server configuration items such as the presence of multiple index files, HTTP server options, and will attempt to identify installed web servers and software. Nikto is not designed as a stealthy tool. Not every check is a security problem, though most are. Related:  Security • Securité, Hack, pentest • matthewthibodeau

Rainbow Tables: Your Password's Worst Nightmare While you might think of Rainbow Tables as eclectic colorful furniture, those aren't the ones we are going to discuss. The Rainbow Tables that we are talking about are used to crack passwords and are yet another tool in the hacker's ever-growing arsenal. What are "Rainbow Tables"? How could something with such a cute and cuddly name be so harmful? The Basic Concept Behind Rainbow Tables We're a bad guy who has just plugged a thumb drive into a server or workstation, rebooted it, and ran a program that copies the security database file containing usernames and passwords to our thumb drive. The passwords in the file are encrypted so we can't read them. What are the options for cracking passwords? When a password is "tried" against a system it is "hashed" using encryption so that the actual password is never sent in clear text across the communications line. Hashing a password is a 1-way function, meaning that you can't decrypt the hash to see what the clear text of the password is.

Dogbert's Blog: BIOS Password Backdoors in Laptops Synopsis: The mechanics of BIOS password locks present in current generation laptops are briefly outlined. Trivial mechanisms have been put in place by most vendors to bypass such passwords, rendering the protection void. A set of master password generators and hands-on instructions are given to disable BIOS passwords. When a laptop is locked with password, a checksum of that password is stored to a so-called FlashROM - this is a chip on the mainboard of the device which also contains the BIOS code and other settings, e.g. memory timings. For most brands, this checksum is displayed after entering an invalid password for the third time: The dramatic 'System Disabled' message is just scare tactics: when you remove all power from the laptop and reboot it, it will work just as before. The bypass mechanisms of other vendors work by showing a number to the user from which a master password can be derived. Other vendors just derive the master password from the serial number.

SPARTA | Penetration Testing Tools SPARTA is a python GUI application that simplifies network infrastructure penetration testing by aiding the penetration tester in the scanning and enumeration phase. It allows the tester to save time by having point-and-click access to their toolkit and by displaying all tool output in a convenient way. If less time is spent setting up commands and tools, more time can be spent focusing on analysing results. Source: Homepage | Kali sparta Repo Author: SECFORCE (Antonio Quina and Leonidas Stavliotis)License: GPLv3 Tools included in the sparta package sparta – Network Infrastructure Penetration Testing Tool SPARTA Usage Examples When SPARTA is first launched, either via the Kali Applications menu or by running sparta at the command line, the main interface will open, presenting you with your workspace. After clicking “Add to scope“, the Nmap scan will begin and we are presented with a progress indicator in the Log pane.

Wapiti : a Free and Open-Source web-application vulnerability scanner in Python for Windows, Linux, BSD, OSX The Penetration Testing Execution Standard The Cyber Incident Tsunami - Time to Get Ready | Online Trust Alliance In advance of Data Privacy & Protection Day, we just released the Cyber Incident & Breach Trends Report (press release here), a look back at the cyber incident trends in 2017 and what can be done to address them. This report marks the tenth year OTA has provided guidance in this area, and while the specifics have certainly changed over time, the core principles have not. Originally we just looked at the number of reported breaches, but last year we broadened the definition to “cyber incidents,” which includes ransomware infections, business email compromise (BEC), distributed denial-of-service (DDoS) attacks and infiltrations caused by connected devices. This broader definition paints a more realistic picture of the threats and associated impact facing organizations today. This year we found that the number of cyber incidents nearly doubled to 159,700 globally, and given that most incidents are not reported, this number could easily exceed 350,000. Rise in Ransom-Based Attacks.