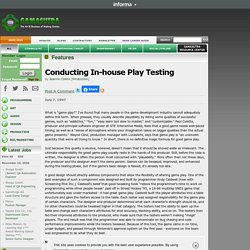 " I've found that many people in the game development industry cannot adequately define this term. When pressed, they usually describe playability by listing some qualities of successful games, such as "addictive," "fun," "easy learn but slow to master," and "customizable. " Paul Coletta, producer and principal software engineer at GTE Interactive Media, feels that a good game needs well-paced timing, as well as a "sense of atmosphere where your imagination takes on bigger qualities than the actual game presents. " 5 questions you should be asking playtesters to get meaningful feedback. “You want to change things, to figure out what needs to change. 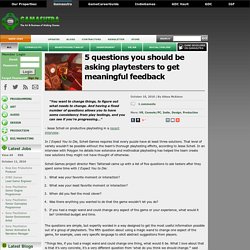 And having a fixed number of questions allows you to have some consistency from play testings, and you can see if you’re progressing…" - Jesse Schell on productive playtesting in a recent interview. In I Expect You to Die, Schell Games requires that every puzzle have at least three solutions. That level of variety wouldn’t be possible without the team’s thorough playtesting efforts, according to Jesse Schell. Joram Wolters's Blog - Breaking Games Part 1 - Off the Map. The following blog post, unless otherwise noted, was written by a member of Gamasutra’s community. 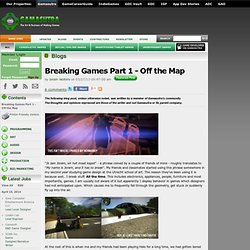 The thoughts and opinions expressed are those of the writer and not Gamasutra or its parent company. "Ik ben Joram, en het moet kapot" - a phrase coined by a couple of friends of mine - roughly translates to "My name is Joram, and it has to break". My friends and classmates started using this phrase somewhere in my second year studying game design at the Utrecht school of art.

The reason they've been using it is because well.. I break stuff. Playtesting Tips and Tools for Game Designers. I run a community Playtesting and Design Slam every other month for devs in Sydney. 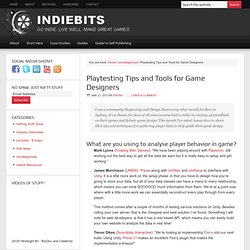 It’s a chance for devs of all sizes (commercial to indie) to meetup, get feedback on their games and debate game design. This month I’ve asked Aussie devs to share their tips and techniques for gathering player data to help guide their game design. What are you using to analyse player behavior in game? Mark Lyons (Floating Man Games): “We have been playing around with Playtomic, still working out the best way to get all the data we want but it is really easy to setup and get working.” Usability Evaluation For Video Games: Gulfs Of Execution, Evaluation. [In this reprinted #altdevblogaday in-depth piece, European University Cyprus assistant professor Georgios Christou begints to look at how to evaluate the usability of a video game.]

A lot of the readers of #altdevblogaday are students, young developers and hobbyists, so I've decided to write down a few things about usability evaluation methods for games. I feel that very little is out there about how to evaluate the usability of a video game, and it seems that most people do this experientially, or not at all. It is also true that the interface is the only way that a game designer/developer has a real dialogue with players, so if the user interface sucks, players are not going to play a game for long.

Features - Finding Out What They Think: A Rough Primer To User Research, Part 2. [The following is the second of two articles by college professor and researcher Ben Lewis-Evans on games user research methodology (see Part 1, which covered focus groups, heuristics, and questionnaires, as well as giving a grounding in the topic of user research in general. 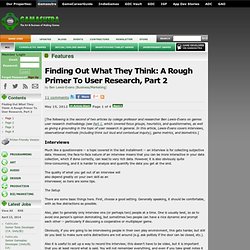 In this article, Lewis-Evans covers interviews, observational methods (including think out loud and contextual inquiry), game metrics, and biometrics.] Much like a questionnaire -- a topic covered in the last installment -- an interview is for collecting subjective data. However, the face-to-face nature of an interview means that you can be more interactive in your data collection, which if done correctly, can lead to very rich data. However, it is also obviously quite time-consuming, and it is harder to analyze and quantify the data you get at the end. The quality of what you get out of an interview will also depend greatly on your own skill as an interviewer, so here are some tips. Features - Finding Out What They Think: A Rough Primer To User Research, Part 1. [In this first article in a new series, college professor and user research Ben Lewis-Evans takes a look at different methods of game user research, offering up a handy guide to different ways you can collect useful information about your game.] 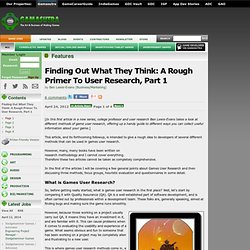 This article, and its forthcoming followup, is intended to give a rough idea to developers of several different methods that can be used in games user research. However, many, many books have been written on research methodology and I cannot cover everything. Therefore these two articles cannot be taken as completely comprehensive. Balance and Flow Maps « #AltDevBlogADay. Heatmaps are an excellent tool for visualizing data with a two dimensional spatial component. 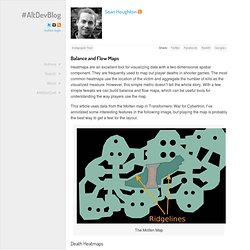 They are frequently used to map out player deaths in shooter games. The most common heatmaps use the location of the victim and aggregate the number of kills as the visualized measure. However, this simple metric doesn’t tell the whole story. With a few simple tweaks we can build balance and flow maps, which can be useful tools for understanding the way players use the map. This article uses data from the Molten map in Transformers: War for Cybertron. The Molten Map Death Heatmaps. Features - Usability Breakthroughs: Four Techniques To Improve Your Game. [Torque's Eric Preisz and two Full Sail usability center PhDs offer four techniques to help make your game more accessible -- even if you don't have access to a giant lab and dozens of focus testers for feedback.] 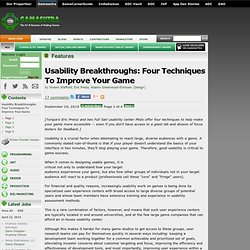 Usability is a crucial factor when attempting to reach large, diverse audiences with a game. A commonly stated rule-of-thumb is that if your player doesn't understand the basics of your interface in two minutes, they'll stop playing your game. Therefore, good usability is critical to game success. When it comes to designing usable games, it is critical not only to understand how your target audience experiences your game, but also how other groups of individuals not in your target audience will react to a product (professionals call these "core" and "fringe" users). Playtesting 1, 2, 3… is this thing fun? » DarrellHardy.com.

The hard part of playtesting a game prototype isn’t the playing. 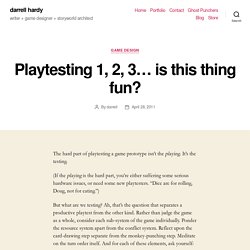 Lennart Nacke's Blog - Biometrics, Game Evaluation and UX: Approach with caution. The following blog post, unless otherwise noted, was written by a member of Gamasutra’s community. 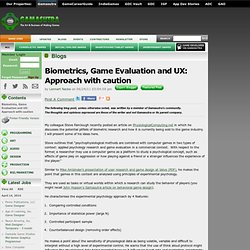 The thoughts and opinions expressed are those of the writer and not Gamasutra or its parent company. My colleague Steve Fairclough recently posted an article on PhysiologicalComputing.net in which he discusses the potential pitfalls of biometric research and how it is currently being sold to the game industry. I will present some of his ideas here. Steve outlines that "psychophysiological methods are combined with computer games in two types of context: applied psychology research and game evaluation in a commercial context. With respect to the former, a researcher may use a computer game as a platform to study a psychological concept, such as effects of game play on aggression or how playing against a friend or a stranger influences the experience of the player.

" Features - Behavioral Game Design. Every computer game is designed around the same central element: the player. While the hardware and software for games may change, the psychology underlying how players learn and react to the game is a constant. The study of the mind has actually come up with quite a few findings that can inform game design, but most of these have been published in scientific journals and other esoteric formats inaccessible to designers. Ironically, many of these discoveries used simple computer games as tools to explore how people learn and act under different conditions. The techniques that I'll discuss in this article generally fall under the heading of behavioral psychology.

Best known for the work done on animals in the field, behavioral psychology focuses on experiments and observable actions. Paul Sztajer's Blog - How many players should you playtest with? Reposted from www.throwthelookingglass.comSo, you've started developing your game, and you've got your basic gameplay done. It's time to start playtesting*. The question occurs to you: how many people should be playtesting my game? *If you've got something you can playtest with, you should be playtesting. As soon as possible. Features - Practical Game Playtesting: A Wii-Based Case Study. [Sidhe's Griffiths discusses in depth how the GripShift developer playtested, and then took that feedback to improve, their Wii version of the recent Speed Racer game, from Wiimote tweaks to difficulty changes.] Playtesting a game for the very first time is an incredibly daunting task.

I'm not talking about all the preparation that goes into it; I'm talking about the abundance of negativity that is bound to be thrown your way. The first time players get their hands on the game always results in problems -- and when it comes time to write up the report, I realize with each soul-destroying point that it's my job to then present this information to the developers. However, the light at the end of the tunnel is that we can find and tackle these problems while the game is still in our hands. Usability Testing with 5 Users. Design, Games, & Game Design (feat. SpyParty) - Chris Hecker's Website. I gave a talk at UC Berkeley called Design, Games, & Game Design (feat. SpyParty). It was for the UC Berkeley School of Information's Design Futures Lecture Series, and I was invited by the excellent Elizabeth Goodman.

Physiological Computing : Biometrics, Game Evaluation and User XP: Approach with caution. This post represents some thoughts on the use of psychophysiology to evaluate the player experience during a computer game.