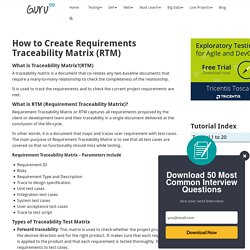 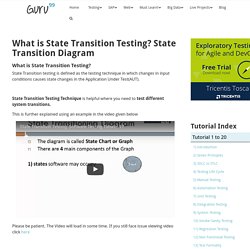 State Transition testing is defined as the testing technique in which changes in input conditions causes state changes in the Application Under Test(AUT). State Transition Testing Technique is helpful where you need to test different system transitions. This is further explained using an example in the video given below Please be patient. The Video will load in some time. For example, we have a flight reservation login screen, consider you have to enter correct agent name and password in the login screen to access the flight reservation application at first attempt. It gave you the access to the application with correct password and login name, but what if you entered the wrong password. How system decides how many login attempts should be allowed to users for the login screen with the wrong password before it finally closes the application. 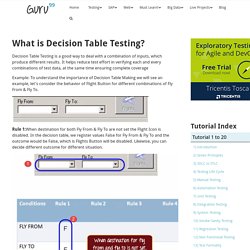 It helps reduce test effort in verifying each and every combinations of test data, at the same time ensuring complete coverage Example: To understand the importance of Decision Table Making we will see an example, let's consider the behavior of Flight Button for different combinations of Fly From & Fly To. Rule 1:When destination for both Fly From & Fly To are not set the Flight Icon is disabled.

In the decision table, we register values False for Fly From & Fly To and the outcome would be False, which is Flights Button will be disabled. Likewise, you can decide different outcome for different situation. Boundary Value Analysis & Equivalence Partitioning with Examples. Practically, due to time and budget considerations, it is not possible to perform exhausting testing for each set of test data, especially when there is a large pool of input combinations. 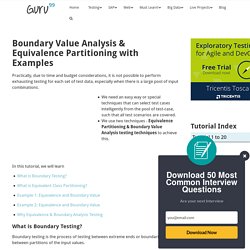 We need an easy way or special techniques that can select test cases intelligently from the pool of test-case, such that all test scenarios are covered. We use two techniques - Equivalence Partitioning & Boundary Value Analysis testing techniques to achieve this. In this tutorial, we will learn. What is Test Basis in Software Testing? Details Test Basis is defined as the source for creation of test Cases. 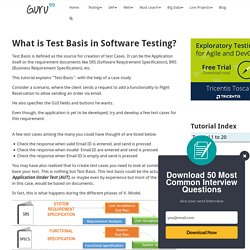 It can be the Application itself or the requirement documents like SRS (Software Requirement Specification), BRS (Business Requirement Specification), etc. This tutorial explains "Test-Basis". with the help of a case study Consider a scenario, where the client sends a request to add a functionality to Flight Reservation to allow sending an order via email. He also specifies the GUI fields and buttons he wants. Even though, the application is yet to be developed, try and develop a few test cases for this requirement.

A few test cases among the many you could have thought of are listed below. How to Write Test Cases: Step by Step Guide with Examples. What is Test Case? 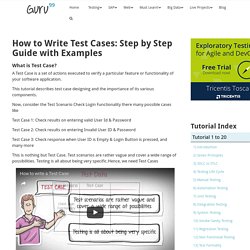 A Test Case is a set of actions executed to verify a particular feature or functionality of your software application. This tutorial describes test case designing and the importance of its various components. Now, consider the Test Scenario Check Login Functionality there many possible cases like Test Case 1: Check results on entering valid User Id & Password Test Case 2: Check results on entering Invalid User ID & Password Test Case 3: Check response when User ID is Empty & Login Button is pressed, and many more. What is Test Scenario? What is a Test Scenario? 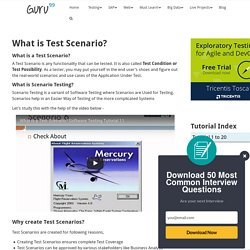 A Test Scenario is any functionality that can be tested. It is also called Test Condition or Test Possibility. As a tester, you may put yourself in the end user’s shoes and figure out the real-world scenarios and use cases of the Application Under Test. What is Scenario Testing? Scenario Testing is a variant of Software Testing where Scenarios are Used for Testing. Let’s study this with the help of the video below - Introduction to Test Formality. Details For a newbie, its easy to assume that Testing is executing various section of code ,on a ad-hoc basis and verifying the results. 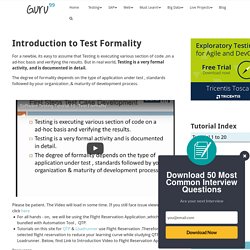 But in real world, Testing is a very formal activity, and is documented in detail. The degree of formality depends on the type of application under test , standards followed by your organization ,& maturity of development process. Please be patient. The Video will load in some time. What is Non-functional Testing? Details Like functional testing, there are non-functional requirements like performance, usability, load factor that are also important. 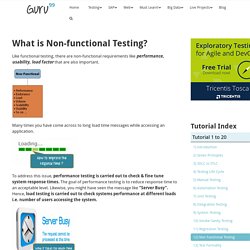 Many times you have come across to long load time messages while accessing an application. To address this issue, performance testing is carried out to check & fine tune system response times. The goal of performance testing is to reduce response time to an acceptable level. Likewise, you might have seen the message like "Server Busy". Depending on the results and expected usage, more system resources may be added. Functional Non - Functional Maintenance. What is Regression Testing? Test Cases, Tools & Examples. What is Regression Testing? 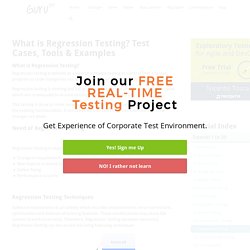 It ensures that old code still works once the new code changes are done. Sanity Testing Vs Smoke Testing: Introduction & Differences. Smoke and Sanity testing are the most misunderstood topics in Software Testing. There is enormous amount of literature on the subject, but most of them are confusing. The following article makes an attempt to address the confusion. The key differences between Smoke and Sanity Testing can be learned with the help of following diagram - To appreciate the above diagram, lets first understand - What is a Software Build? If you are developing a simple computer program which consists of only one source code file, you merely need to compile and link this one file, to produce an executable file.