How to Copy Music from Your iPhone, iPad, or iPod touch to Your Computer for Free 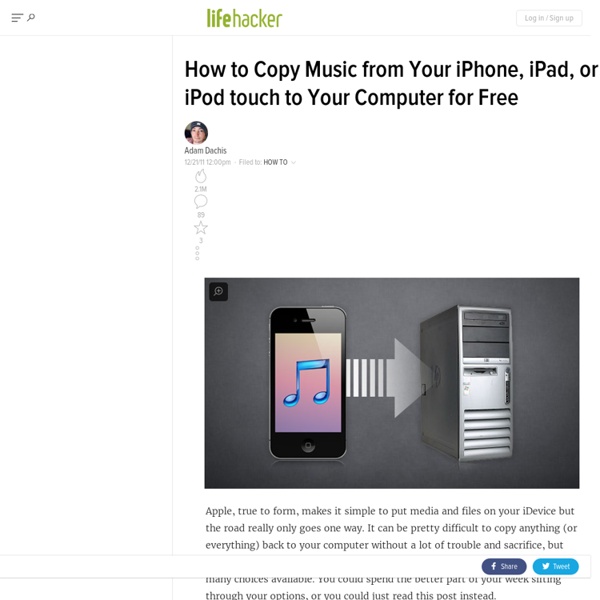 Pod to Mac, now Phone to Mac, is no longer free. Additionally, the old, free version doesn't run on Lion. With my library over 1,000 songs, is there any other (completely) free application to do this on a Mac running Lion? EDIT: I found an open source application called DeTune. Here is a link: [www.headlightsoft.com]

- StumbleUpon If a picture tells a thousand words, then an animated GIF must be good for a few more. Whether you want to animate your avatar, get involved in a meme, or amuse your friends with a funny photo sequence, an animated GIF is a great way to do it. We have found — and tried and tested — five free online services that make creating animated GIFs an absolute cinch. The Ultimate Challenge (Minute to Win It) Party Games - Kate's Escapades My son is now the ripe old age of 11. When it came time to plan his birthday party, we realized he’s at that age where little kid parties just won’t cut it any more. We figured there would be about 25 kids (boys and girls) to keep occupied for 2 hours. After a not so quick perusal of the internet for kid party ideas, I decided to plan an Ultimate Challenge party by modifying some popular Minute to Win It challenges. After randomly splitting the kids into 4 teams, the Ultimate Challenge Party began.

Top 10 Reasons Not To Become A Recording Engineer Recording can be fun. Sometimes it can be a career. But it’s not for everybody. And today, becoming a working engineer is no easier than becoming a working musician. Throughout my adult life, I’ve made most of my living recording, mixing, and editing music and sound. I also love language just as much as I love audio, and my work as a journalist has allowed me the opportunity to cover the aesthetics, techniques and economics of the business for some of my favorite outlets like AES, Tape Op, SPARS, Indaba, The Deli, and SonicScoop.

Music Discovery Project Upload Disco Loading... garagestoragetluweyen *Garage Storage Solution*By: Tluweyen2 February 2010 If you are like my family, we are constantly short on space in our house. Rather than buy a huge McMansion, we bought what we could afford and ended up with a ranch house with about 2000 square feet. While this is big compared to previous generations, it seems ours has more “stuff”.

100 Useful Web Tools for Writers All kinds of writers, including poets, biographers, journalists, biz tech writers, students, bloggers and technical writers, take a unique approach to their jobs, mixing creativity with sustainability. Whether you’re a freelance writer just scraping by or someone with a solid job and more regular hours, the Internet can provide you with unending support for your practical duties like billing, scheduling appointments, and of course getting paid; as well as for your more creative pursuits, like developing a plot, finding inspiration and playing around with words. Turn to this list for 100 useful Web tools that will help you with your career, your sanity and your creativity whenever your write. 10 things science (and Buddhism) says will make you happy I’m a science geek as well as a Buddhist geek, and recently when I was leading a retreat on how to bring more joy into our lives I found myself making a lot of references to an article published in Yes magazine, which touched on ten things that have been shown by science to make us happier. It seemed natural to draw upon the article because so much of the research that was described resonated with Buddhist teachings. So I thought it would be interesting to take the main points of the article and flesh them out with a little Buddhism. 1. Be generous“Make altruism and giving part of your life, and be purposeful about it,” Yes magazine says.