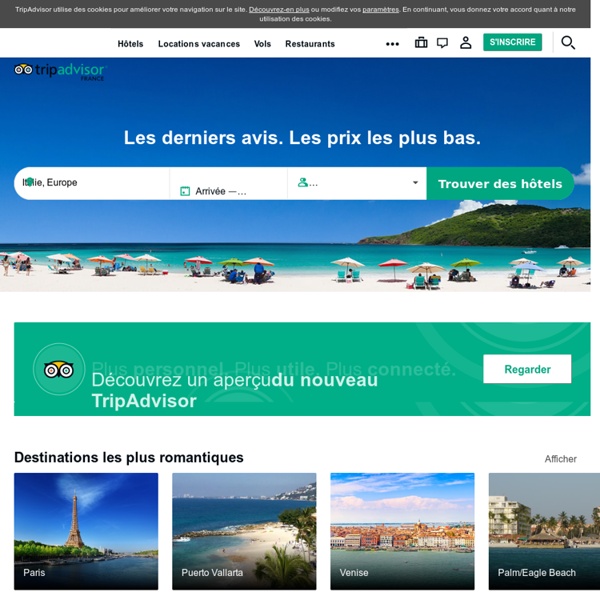 40 Most Useful Travel Websites That Can Save You a Fortune Welcome Stumbled Upon & Delicious Users: You may also want to check out our 180+ Best Money Saving Tools. Traveling doesn't have to break the bank (in fact, you can travel for free), and there are plenty of places that'll help you find the best vacation for your budget. Get discounts and the insider scoop with these great resources. Don't forget to ask for free travel upgrades. (See also: 5 Essential Travel Tools) Cheap Flights and Accommodations Tickets and Rates - Palace of Versailles Trianon Palaces and Marie-Antoinette's Estate ticket The delicate, bucolic world of Marie-Antoinette, the grand Trianon of Louis XIV Grand Trianon and gardens of the Grand Trianon, Petit Trianon, Queen's hamlet, French and Anglo-Chinese gardens, French pavilion, temple of Love...

supernews © kulture shop india's transformation goes leaps and bounds, and just as quickly emerges an interesting new infrastructure that specifically caters to the lifestyle requirements of a savvy new generation. retail is very much at the forefront of new initiatives, and it's in the country's top-tier cities where these manifest most visibly. the newly opened kulture shop in mumbai is emblematic of this trend. situated in bandra west, an upscale suburb of this sprawling city of over 18 million inhabitants, it's an initiative of arjun charanjiva, founder and c.e.o., and kunal anand, jas charanjiva and rajeev sathe. these four professionals share a wealth of prior work experience in the creative and corporate fields both in india and abroad, and they've now joined forces to set up shop out of a sheer passion for graphic art.

Authentic family house in Haarlem à Haarlem Authentic and spacious, 1931 build family home, a few km to Haarlem’s historical city centre. Three bedrooms, 2 bathrooms: 2 showers 1 bath. Very near to Amsterdam, Keukenhof, Schiphol airport and the nice beaches at Zandvoort and Bloemendaal (7km). Gogobot releases iOS travel app with discovery tools and photo filters Travel, then, is a voyage into that famously subjective zone, the imagination, and what the traveler brings back is — and has to be — an ineffable compound of himself and the place, what’s really there and what’s only in him.-Pico Iyer In March of this year, I wrote a post titled, “Why Gogobot makes Google and TripAdvisor look like folding car maps.”

41 Places To See Before You Die (Part I) No matter how advanced our cities and technology is, eventually we get tired of all the noise, stress and crowd of the city and want to be in the nature. Humans have transformed Earth beyond recovery, but luckily not everything is lost yet. Beautiful mountains, blue water lakes, magnificent oceans with fabulous islands – our planet has many breathtaking places and awe-inspiring sceneries just waiting for you to discover them. However, life is short, and the funds are limited, so we have to narrow down the selection. Knowing that you are just another lazy panda, we’ve done it for you! We’ve picked 41 most amazing places in the world, however it is said that “beauty is in the eye of the beholder”, so you may as well have your very own personal list of places to see before you die.

Expedia Encourages You to Find Your Story with New App Travel and soul searching are inextricable partners. Some of the world’s greatest literary stories are hinged on enlightened journeys. Kerouac took to the road, Thompson rambled to Vegas, de Saint Exupéry’s Little Prince explored the Sahara, Agatha Christie solved murders on the Orient Express, and Hemingway ambled around Spain. And where there’s travel, there’s a definite need to find a mode of transport, though we’ll pass on the boat Yann Martel stranded his character Pi on, thanks very much.

11 million downloads on, Expedia 3.0 taps live data to create visual itineraries on iOS and Android We last caught up with Expedia back in November, just as it had rolled out a new iOS and Android mobile app, adding flight information, special offers and high-res hotel photos. Now, the online travel behemoth has launched a much more significant update with version 3.0 for iOS and Android, introducing new visual mobile itineraries which are connected to the traveler’s Expedia itinerary. Indeed, the latest mobile Expedia incarnation gives travelers up-to-date information using a set of visual cues, tapping location-aware smartphone features and time-zone updates to surface the most relevant part of the itinerary. The new itineraries feature updates its information in real-time as a traveler moves from A to B, and even lets users share their itinerary via email and text message. It covers flights, displaying confirmation codes, airlines, flight numbers, travel dates/times, gate information and flight status, as well as flight maps showing pins for departure and arrival.