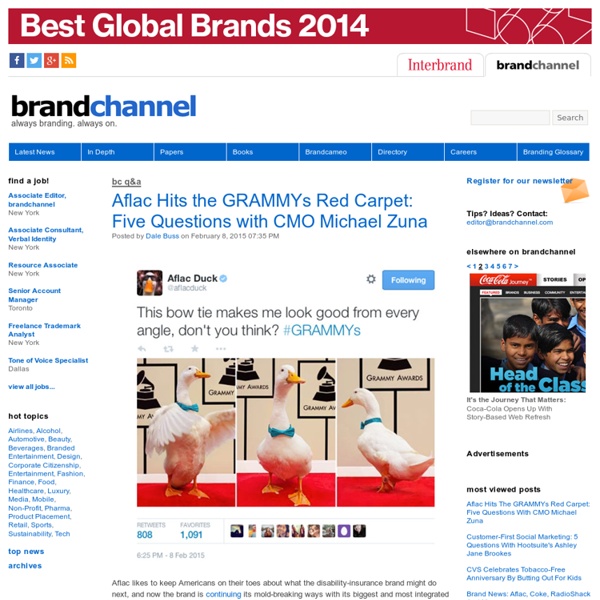 retail watch Posted by Dale Buss on March 12, 2014 05:37 PM America's two big mainstream men's apparel brands finally found a fit with each other after several months of wrangling over whether they would get together and which would be in control if they did. Men's Wearhouse finally agreed to acquire the smaller Jos. A. Bank for $1.8 billion by paying $65 in cash.

SmartBlog on Social Media We know two things about millennials: They will soon have record-breaking purchasing power, and they spend tons of time with content created by their peers, otherwise known as UGC (user-generated content). What we didn’t know was how much time they spend with UGC and how they feel about it. That is, until now. Ads Will Soon Follow You From One Device to the Next Kamakshi Sivaramakrishnan calls herself an “advertising quant.” Most people with a PhD in her field of information theory are recruited onto Wall Street if they decide to leave the halls of academia, she says. She chose to go into advertising instead, and, with her startup, Drawbridge, is applying her expertise to a problem central to the bottom line of a wide swath of digital companies: how to make advertising pay as audiences move over to mobile devices. Founded in 2010, Drawbridge is using statistical methods that rely on anonymous data to track people as they move between their smartphones, tablets, and PCs. The company’s technology has attracted attention both because of its high-profile backers—Kleiner Perkins Caufield & Byers and Sequoia Capital, two top Silicon Valley funders, have invested $6.5 million—and because it claims its approach will protect an individual’s privacy while also filling an important gap in the still-nascent mobile advertising technology market.

La compétition MIDEM campagne marketing - midem.com SILVER AWARD:You Need to Hear This You Need to Hear This for Philips Sound By Ogilvy & Mather (UK) With You Need to Hear This, Philips presents music you need to hear in ways you’ve never heard before. Our audience doesn’t just want to hear about what’s awesome, they need to. How to Measure Social Media Marketing Performance Early efforts in social media marketing have created a tremendous amount of buzz and interest, but surprisingly few case studies focus on monetization. A recent study by Ketchum and Nielsen shows the number-one activity of social media users (online or offline) is reading blogs – even above TV! So it’s clear that social media is here to stay, and accountable programs must be created to deliver performance and ROI. Here are 3 steps to help you get started: #1: Define Key Performance Indicators (KPIs) and Measure Against Them

The Future of Neuromarketing — Studying Moods, Not Emotions stumbleupon I first met Erik du Plessis during his lecture in Amsterdam, where he talked about emotions in advertising. The event was held at Posthoornkerk, an imposing church that conferred the meeting an air of mystery and solemnity. I was keen to meet him, as I have been following his posts on different LinkedIn discussions, and he had a rather different approach to neuromarketing than most of the researchers there.

Sales and Marketing Strategy: Shout it from the rooftops? Marketing and sales, the key functions of any business to generate the revenues to keep you in operation. But when is the right time to start marketing and sales activity when you are a start-up business? This question needs a bit of thought. Getting Started with Twitter Ads for Small Business This post originally appeared on the American Express OPEN Forum, where Mashable regularly contributes articles about leveraging social media and technology in small business. Are you among the one-third of small businesses in the U.S. using Twitter to promote your products and services? If so, you’re on the right track: Research from digital intelligence firm Compete shows Twitter followers are more than 60% more likely to visit your website and more than 50% more likely to make a purchase and recommend your company. Many companies are content to allow Twitter accounts to grow organically, but some are looking to accelerate growth of their follower base and increase the reach of promotions. To that end, Twitter recently rolled out two new paid advertising options for small businesses, currently available via invitation: Promoted Accounts and Promoted Tweets. When Should I Use Promoted Accounts?

Twitter Search Gets a Little More Powerful We missed this last week when ReadWriteWeb reported it, but maybe you did, too. So here's something we've just discovered. A small but very handy change at Twitter's search engine, search.twitter.com, means it now peeks inside the expanded versions of web addresses shortened using services like bit.ly and TinyURL. The implications for you? Here are two: