The Olympics – why it has all gone wrong. Summary Why the Olympics is getting a kicking. London Olympics 2012: McDonald's force Olympics bosses to ban all restaurants from selling chips unless with FISH. Hundreds of restaurants and food retailers expected to be affectedMemo about the change said retailers don't back the decisionAll British favourites must be served without chips - except for fish By Emma Clark Published: 18:29 GMT, 11 July 2012 | Updated: 09:20 GMT, 12 July 2012.

Britain flooded with 'brand police' to protect sponsors - Home News - UK. London Olympic committee says you're only allowed to link to their site if you have nice things to say. Build - Let us design your world - 10.29. Our poster (above). - Title - After Harry. Thinking - I was rubbish at sport, generally picked last for teams, asthmatic etc., but I was good at technical drawing and OK at art.

Graphic design for me is the one thing I'm good at, for some reason my brain works in that way. So for my poster I didn't feel I could celebrate a sport, it didn't feel right. Olympic park: overthrow of a dictatorchip. Workers at the Olympics site in Stratford have won a small battle against the hamburger tyrant: staff working on the Games' opening ceremonies are now able to buy non-McDonald's chips. 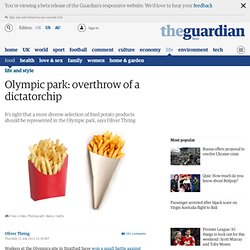 The ban (which gave the chain exclusive rights to sell chips in and around Olympic venues, the only exception being for caterers serving them with fish) was lifted yesterday. Before the ban some samidzat potato products had found their way into the park under Ronald's red nose: dauphinoise, which resembles a chip in no way at all; and waffles, which could, I suppose, almost be deemed a species of chip. There are no reports of how miniature roast potatoes, hash browns, crisps, game chips, sautéed spuds or mash fritters (OK, I might have made those up) might have fared in this dictatorchip, likewise chips made from parsnip, cassava or other floury roots. But it seems pretty sneaky of McDonald's to have claimed the exclusive right to sell chips and fries in Stratford. Fries Chip-shop chips Posh chips. London Olympics fans be warned – no Visa card, no tickets. Sports fans who want to use a credit or debit card to buy tickets for the London 2012 Olympic and Paralympic Games will be restricted to using a Visa card, due to an exclusive deal between the Olympic organisers and the credit card payment system. 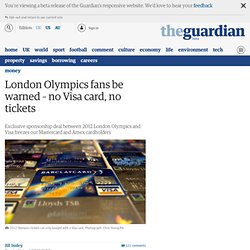 Payment for the 10 million tickets expected to be sold from 2011 through the Olympic website and other authorised sellers have been restricted to those that run through the Visa payment system. On the official London 2012 ticket site, it says: "In recognition of Visa's support of the Olympic Games and Paralympic Games, London 2012 is proud to accept only Visa payment cards (debit, credit and prepaid), along with cash and cheques. Lockdown 2012: Security at the Olympics. For the XXXth Olympiad, which opened last Friday in London, organisers have placed a heavy emphasis on security. 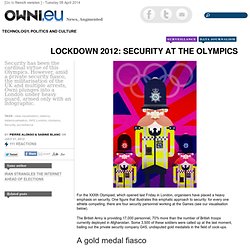 One figure that illustrates this emphatic approach to security: for every one athlete competing, there are four security personnel working at the Games (see our visualisation below). The British Army is providing 17,000 personnel, 70% more than the number of British troops currently deployed in Afghanistan. Some 3,500 of these soldiers were called up at the last moment, bailing out the private security company G4S, undisputed gold medalists in the field of cock-ups.

A gold medal fiasco “Fiasco”, “shambles”, “inexcusable”, “unacceptable”, “amateurish”. The Truth About The Branding Of The Games. By Ian Woods, Senior News Correspondent Visa has defended its exclusive Olympic sponsorship which means other cardholders will be denied access to cash machines at Games venues. 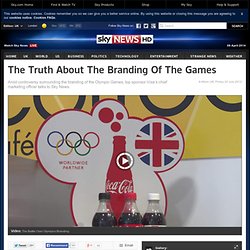 In an exclusive interview with Sky News, Visa's chief marketing officer in Europe, Mariano Dima, said: "If the sponsors are not there to support the Games, the money will have to come from local funding, or there will be a much smaller Games. " The only method of buying Olympic tickets is by Visa card, but Mr Dima denied that the Olympics' official partner had created a negative image for themselves with a heavy handed approach. "We want to drive more transactions through a Visa card," he said.

"That's why we sponsor this, and that's why we can afford to drive this sponsorship. "There are tens of thousands of ATMs around London that people can take money from in any part of London before coming to the Olympic Park. " By contrast, Brandwatch found that other Olympic sponsors had a much more negative image. The 2012 Olympics ©: A Cyberpunk Dystopia. At first glance, there would appear to be little in common between the London Olympic Games and the dystopian cyberpunk universes dreamt up in the 80’s in novels by William Gibson, Bruce Sterling, Philip K. 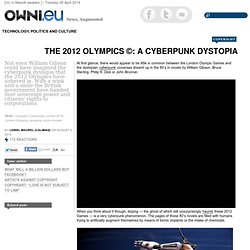 Dick or John Brunner. When you think about it though, doping — the ghost of which still unsurprisingly haunts these 2012 Games — is a very cyberpunk phenomenon. The pages of those 80’s novels are filled with humans trying to artificially augment themselves by means of bionic implants or the intake of chemicals. When it comes to the issue of intellectual property rights and the International Olympic Committee (IOC), the analogy with cyberpunk seems particularly relevant. With the frightening arsenal put together by organisers for the purpose of protecting copyrights and brands associated with the Games, we’re catching a glimpse of how far the worst excesses of intellectual property could lead us. Multinational corporations have become more powerful than states. Olympic ‘Brand Police’ Are Monitoring What You Say, See and Eat. Olympic ‘Brand Police’ Are Monitoring What You Say, See and Eat Posted on Jul 16, 2012 The Olympics generate a fortune from sponsorships and exclusive deals, and to make sure no one gets in on the action for free, a uniformed force of advert cops has been empowered to patrol the streets of London. 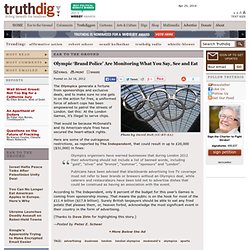 London Olympics: Lord Coe's astonishing sponsors outburst. HEAVY-HANDED security chiefs will ban Olympic spectators for wearing the wrong brand of clothes, it emerged yesterday. Games boss Sebation Coe warned anyone wearing a Pepsi T-shirt is likely to be booted out because it would upset sponsors Coca-Cola. And he only said spectators in Nike trainers “could probably” be allowed in although Adidas are also backing the event. Coe defended the draconian move and said it was to protect corporate sponsors who have paid a fortune to be involved. Branding London: selling an Olympic city of contradictions. For the past four years, while thousands of Olympic and Paralympic athletes have been pounding tracks, lifting weights and ploughing along pools in preparation for the London Games, those tasked with marketing the city have been plugging away at what they hope is a winning strategy of their own. 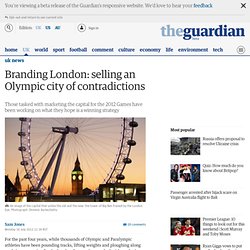 Like the competitors, their utterances are peppered with talk of dream results, golden opportunities, and a once-in-a-lifetime event.