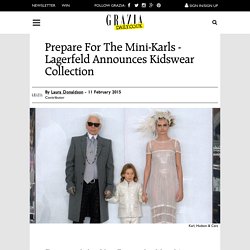 That’s right, Karl Lagerfeld has announced that he is launching a clothing line for children, to be unveiled in Spring 2016. The collection will operate under the designer's own line in collaboration with Groupe CWF, who are already responsible for the childrenswear extensions of Chloé, Burberry, DKNY and Marc Jacobs. A statement from the brand said: "The announcement reflects the brand's ongoing commitment to newness and will allow Karl Lagerfeld to share its ironic, playful, creative vision to a young audience Pier Paolo Righi, CEO and president of the label added: "The Karl Lagerfeld Kidswear collection presents a unique opportunity to share our cool, ironic, iconic DNA with a wider Karl Lagerfeld audience.

"Due to our brand's wide appeal our expansion into the juniors market is a natural fit to further enhance our reach. " Karl Lagerfeld Kidswear line: Children's Clothes, details, Hudson Kroenig & North West. Karl Lagerfeld isn't afraid to take risks - and it seems like he's taking a leap of faith and delving into a new business venture - kidswear. 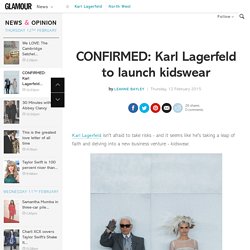 It's been confirmed that the 81-year-old designer has just signed a global licensing agreement to debut a kidswear line in 2016. We're predicting mini leather jackets, mini white shirts and oh-my-gosh-can-you-imagine, fingerless gloves? Here's the first sketch from Mr Lagerfeld... As it's widely known, Karl has never had children of his own but has designed for his godson Hudson Kroenig - who is a regular on the Chanel Haute Couture catwalk. We're obsessed with this little cutie! Could North be the face of the collection? 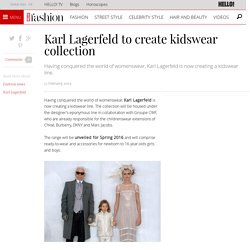 The collection will be housed under the designer's eponymous line in collaboration with Groupe CWF, who are already responsible for the childrenswear extensions of Chloé, Burberry, DKNY and Marc Jacobs. The range will be unveiled for Spring 2016 and will comprise ready-to-wear and accessories for newborn to 16-year-olds girls and boys. Karl Lagerfeld to launch rock 'n' roll-inspired children's clothing line. Designer, 81, releasing children's line in spring 2016 for children up to 16There'll be two Karl Lagerfeld Kidswear collections a year, at £17 per pieceThought to be inspired by his godson Hudson Kroenig, five By Margot Peppers for MailOnline Published: 17:40 GMT, 15 February 2015 | Updated: 18:54 GMT, 15 February 2015. 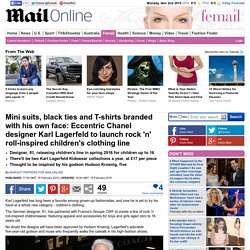 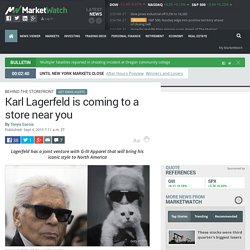 The ponytailed, cat-loving, German fashion designer is joining the G-III Apparel Inc. portfolio in the coming months with his new brand, Karl Lagerfeld North America. Executives have high hopes that it will quickly grow into a business with annual revenues of at least a half-billion dollars. “It’s quite achievable over time,” G-III Chief Executive Morris Goldfarb told analysts on the company’s second-quarter earnings call. Karl Lagerfeld launches flagship store in London. The Brand. Under the creative direction of Karl Lagerfeld, one of the world’s most influential and iconic designers, the Lagerfeld Portfolio represents a modern approach to distribution, an innovative digital strategy and a global 360 degree vision that reflects the designer’s own style and soul. 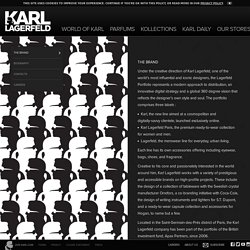 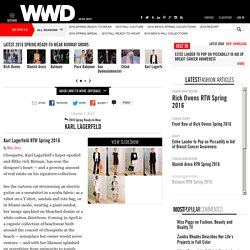 See the cartoon cat strumming an electric guitar on a sweatshirt in a scuba fabric; as a robot on a T-shirt, sandals and tote bag; or in Miami mode, wearing a giant sunhat, her image speckled on bleached denim or a white cotton shirtdress. Coming in April is a capsule collection of beachwear built around the conceit of Choupette at the beach — someplace her owner would never venture — and with her likeness splashed on everything from swimsuits to towels.

The cat didn’t get her paws on the more formal parts of the collection, always based on a graphic, rock-tinged style. Consider sleek pantsuits and dresses with mesh inserted at the shoulders or around the ribcage; or bow blouses and Prince of Wales tailoring printed with lightning bolts. Karl Lagerfeld Sets Karl Kids Collection. CHILD’S PLAY: Kids and grown-ups munched on cotton candy and Karl Lagerfeld-stamped marshmallows at an event to present the new Karl Kids collection on Wednesday at Karl Lagerfeld’s headquarters in Paris. 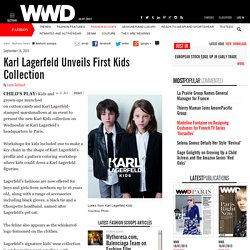 Workshops for kids included one to make a key chain in the shape of Karl Lagerfeld’s profile and a pattern coloring workshop where kids could dress a Karl Lagerfeld figurine. Lagerfeld’s fashions are now offered for boys and girls from newborn up to 16 years old, along with a range of accessories including black gloves, a black tie and a Choupette headband, named after Lagerfeld’s pet cat. The feline also appears as the whiskered logo festooned on the clothes. Lagerfeld’s signature kids’ wear collection is set for spring 2016 retailing, with France’s Groupe CWF having the global license. Selected pieces will be available at children’s e-retailer Melijoe in December before the full collection rolls out to multibrand stores and department stores internationally in January.