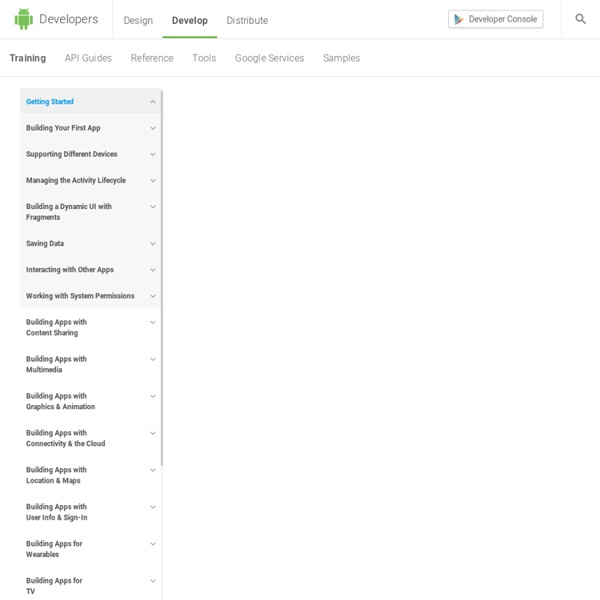 Welcome to Training for Android developers. Here you'll find sets of lessons within classes that describe how to accomplish a specific task with code samples you can re-use in your app. Classes are organized into several groups you can see at the top-level of the left navigation. This first group, Getting Started, teaches you the bare essentials for Android app development. If you're a new Android app developer, you should complete each of these classes in order. If you think you might prefer to learn the basics through interactive video training, check out this trailer for a course in the fundamentals of Android development. Start the video course

How to build an Android app One of the strengths of the Android platform compared to iOS, for example, is that it has an open source basis, which makes it easier to produce your own applications and distribute them without waiting for a lengthy approval process. You can set up your own Android app on your PC as long as you have the right software installed, and you can even take it for a test drive using an Android emulator so you can see what it will look like when it's run on a smartphone. There are two techniques that you can use to produce Android applications with a PC. The first uses the Android Software Development Kit (SDK).

Developing Android Apps completely in Python The goal of this training is to show you how to start developing full Android applications using only Python. Different technologies will be demonstrated, including PySide-based QML GUIs using the Necessitas Qt port and the Py4A/SL4A-based approach, which can be combined with Android’s WebKit and re-use Python web frameworks. While Android already has a good SDK out of the box, being able to use Python instead of Java is a big advantage for some developers - it allows for quicker turnaround times, and reuse of Python libraries. Python on Android uses a native CPython build, so its performance and compatibility is very good. Combined with PySide (which uses a native Qt build) and Qt’s support for OpenGL ES acceleration, you can create fluent UIs even with Python.

Using the Android ActionBar Using the Android action bar (ActionBar) - Tutorial Based on Android 4.4 Copyright © 2009, 2010, 2011, 2012, 2013, 2014 Lars Vogel Using the action bar in Android applications This tutorial describes how to use the action bar in your Android applications. It is based on Eclipse 4.3 (Kepler), Java 1.6 and Android 4.4. Developer Tools Before installing Android Studio or the standalone SDK tools, you must agree to the following terms and conditions. This is the Android Software Development Kit License Agreement 1. Make an App without Coding using Andromo App Maker for Android If you can point and click, you can make an Android app. No kidding. Make your own app right now. Andromo makes it fast and easy to create Android apps, with absolutely no programming required.

The Python Tutorial — Python 3.4.1 documentation Python is an easy to learn, powerful programming language. It has efficient high-level data structures and a simple but effective approach to object-oriented programming. Python’s elegant syntax and dynamic typing, together with its interpreted nature, make it an ideal language for scripting and rapid application development in many areas on most platforms.

Eclipse Shortcuts Eclipse Shortcuts - Tutorial Copyright © 2009, 2010, 2011, 2012, 2013 Lars Vogel Eclipse Shortcuts This article lists helpful Eclipse shortcuts. It is based on Eclipse 4.2 (Juno). Collect ODK Collect renders forms into a sequence of input prompts that apply form logic, entry constraints, and repeating sub-structures. Users work through the prompts and can save the submission at any point. Finalized submissions can be sent to (and new forms downloaded from) a server. 50 More Gorgeous Android Apps Unless you’ve been living under a rock for the last few years, you’re probably aware of the battle that has been raging between the iOS and Android platforms. Loyalists on both sides have been taking turns throwing punches at each other. For a good few years, the one punch Android fans were having a tough time deflecting was about the visual quality of apps on iOS.

AngularJS Tutorial for Beginners With NodeJS ExpressJS and MongoDB (Part I) - Adrian Mejia’s Blog This tutorial is meant to be as clear as possible while at the same time teach you how to connect AngularJS with back-end servers in Node.Js, Express.js and databases such as MongoDB, also known as the MEAN stack. Let’s start with angularJS! We are going to start building all the examples in a single HTML file, which has embedded javascript and NO styles/CSS for simplicity. Android External Storage Example - javatpoint Like internal storage, we are able to save or read data from the device external memory such as sdcard. FileInputStream and FileOutputStream classes are used to read and write data into the file. Example of reading and writing data in the android external storage