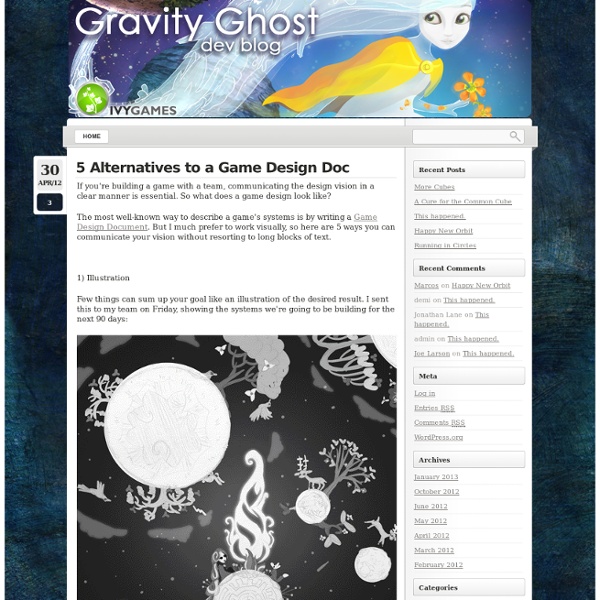 If you're building a game with a team, communicating the design vision in a clear manner is essential. So what does a game design look like? The most well-known way to describe a game's systems is by writing a Game Design Document. But I much prefer to work visually, so here are 5 ways you can communicate your vision without resorting to long blocks of text. Few things can sum up your goal like an illustration of the desired result. Pencil sketch, plus a Photoshop pass for color and contrast. Even if you've embraced the philosophy of rapid prototyping and iteration, at each stage you need a goal to iterate towards. What if your game needs moving parts to explain what's going on? The final presentation had nearly 70 slides illustrating steps in the gameplay. If you're lucky, a series of mock-ups like this can do more than explain your goal: it can energize and inspire the team to do their best work. This is an activity I have all my game design students do. Related:  Game Design Documents • smadar.bernstein

Jason Bakker's Blog - A GDD Template for the Indie Developer The following blog post, unless otherwise noted, was written by a member of Gamasutra’s community. The thoughts and opinions expressed are those of the writer and not Gamasutra or its parent company. I'm in the process of making a few different design documents at the moment, so that our iPhone development team can have some options to choose from. After writing a couple of docs, I've massaged my design document "template" into something that really works for me, and I think works better than the traditional formats for independent game development. The documentation style you get taught in university and at game companies tends to have a large focus on target audiences, marketability and "selling the project" to whoever is reading it, as opposed to describing the project and laying it out in a more objective and easy to read manner. Intro 1 paragraph description of the game. The dame's gone missing, and, just like always, you're to blame. Character Bios Rough Plot 4-6 paragraphs. That's it!

Tiny Game Design Tool Tile-based 2D Platformer Now that we have decided that the player character will be represented by a kinematic object, we can move it around freely by setting the position. Let’s start with moving left/right. The movement will be acceleration-based, to give a sense of weight to the character. The two vertical bars marks the beginning and end of the frame. v1 = v0 + acceleration * dt The colored area is the translation we are supposed to apply to the player character during the current frame. translation = (v0 + v1) * dt * 0.5 This is how we integrate the acceleration and velocity to move the character in the update-loop: If you are unsure how to handle input in Defold, there’s a guide about that here. At this stage, we can move the character left and right and have a weighted and smooth feel to the controls. Gravity is also an acceleration, but it affects the player along the y-axis.

Features - Design Document: Play With Fire [In the spirit of community, and for the sake of education, International Hobo's Chris Bateman has provided a rare public look at an in-depth commercial game design document. The game, here tentatively titled Fireball and targeted for the PlayStation 2, was released for the PC by Manifesto Games with the new title of Play With Fire. A second document was also provided, the Fireball Field Design Guide, which can be downloaded in *.doc format here.] Fireball Hidama Example level from Play With Fire 1.1. Fireball is a budget game for PS2. On each field (level) the player has an ultimate goal of igniting the torch (brazier) and thus clearing the field – but the torch is generally positioned at a high point and out of reach. Simple, clean cut graphics and controls combine to give an easy to learn but engaging play experience. 1.2. The player should be delivered the following experiences: Effortless play originating from a simple control scheme. 1.3. A hybrid approach may also be undertaken. 2.1.

Developer Blog | A tiled adventure/puzzle game by Jason Roberts. “Nice game,” you’re probably thinking, “but can it be reduced to dry, boring diagrams?” It sure can! Three sequential tile interaction diagrams In these diagrams, rows containing yellow diamonds represent interactions between tiles (i.e. puzzle solutions, roughly speaking). A single row can actually represent multiple interactions that occur in sequence, so four diamonds don’t necessarily mean a single interaction involving four tiles. Rows containing blue squares represent tile states and state changes in-between interactions (e.g. the player may be navigating around within tiles, but tiles are not interacting with each other). If a line (coming from above) ends at a yellow diamond, that represents the end of the tile’s life; it has been absorbed through interaction with another tile. Now consider the middle diagram above. But even with only four squares available, a five-tile situation isn’t necessarily a game breaker, because tiles can sometimes be stacked.

infinite_adaptive_mario [Slug Wiki] Infinite Adaptive Mario Download: here Requires: Java 1.6 Controls: arrows to move, 's' to jump, 'a' to run Recently, there has been increased interest in building games that dynamically adapt to players. Infinite Adaptive Mario expands on Markus Persson's Infinite Mario by adapting to the skill of the player. The player begins at level 50, which produces levels with a moderate degree of challenge. The best way to get a feel for how dynamic difficulty works in Infinite Adaptive Mario is to try it out for yourself. Levels generated at the easiest and most challenging difficulty settings:

The Two C Introduction There have been a countless number of books and articles written about the games industry from both its technical and theoretical aspects. However many of these have been written by people who although deserving of respect due to the amount of effort they have used to achieve their professional status are still probably not the ideal people to listen to. The reason for this is as follows: To make video games you only really need the technical knowledge to do so. However to create good games requires both a sound technical knowledge and creative and communication skills. This article therefore has been written with a focus on creative and communication skills, not technical. Creativity Anybody can be creative. Another complaint is that there are too many licensed games. Even if you are not naturally creative there is still no reason why you cant design a good game. Others ways you can learn to be creative are by watching and reading every film and book you can.

Bartle Test The Bartle Test of Gamer Psychology is a series of questions and an accompanying scoring formula that classifies players of multiplayer online games (including MUDs and MMORPGs) into categories based on their gaming preferences. The test is based on a 1996 paper by Richard Bartle[1] and was created in 1999–2000 by Erwin Andreasen and Brandon Downey.[2][3][4][5] Although the test has met with some criticism[6] for the dichotomous nature of its question-asking method, the test has been taken by a large number of computer game players.[7] As of October 2011, the test had been taken over 800,000 times.[8] Achievers[edit] Also known as "Diamonds," these are players who prefer to gain "points," levels, equipment and other concrete measurements of succeeding in a game. Single-player appeal to the Achiever[edit] Every game that can be "beaten" in some way caters to the Achiever play style by giving them something to accomplish. Multi-player appeal to the Achiever[edit] Explorers[edit] Killers[edit]

Game Design | Gorogoa Developer Blog “Nice game,” you’re probably thinking, “but can it be reduced to dry, boring diagrams?” It sure can! Three sequential tile interaction diagrams In these diagrams, rows containing yellow diamonds represent interactions between tiles (i.e. puzzle solutions, roughly speaking). Rows containing blue squares represent tile states and state changes in-between interactions (e.g. the player may be navigating around within tiles, but tiles are not interacting with each other). If a line (coming from above) ends at a yellow diamond, that represents the end of the tile’s life; it has been absorbed through interaction with another tile. Now consider the middle diagram above. But even with only four squares available, a five-tile situation isn’t necessarily a game breaker, because tiles can sometimes be stacked. Or it might be a confusing headache. So will I need to enable shelves or not?

Efficient writing for video games Good writing in video games is crucial. Note though that writing does not equal story. Story is part of the writing but let's not forget menus, tutorials, items and skills description, etc.. When I write for games, I often rewrite the same texts 5 or 6 times with a strong emphasis on reducing the word count to the strict minimum. In that regard, Dawn of Heroes for the Nintendo DS is appaling by it's inneffiency. It seems 70% of the texts could have been removed for a better effect. What is Dawn of Heroes? DoH is a regular tactical RPG where you control up to 5 characters on a battlefield and use their abilities against a range of enemies. Nayeli's Omniscient ability At first sight, the description is a bit long. First sentence : "The skill-user" is totally redundant to the screen itself. Suggested rewrite : Grants unlimited range to all abilities.Using an ability locks down movement for 2 turns. Two small sentences, displayed one over the other for easy "bullet point" style reading.