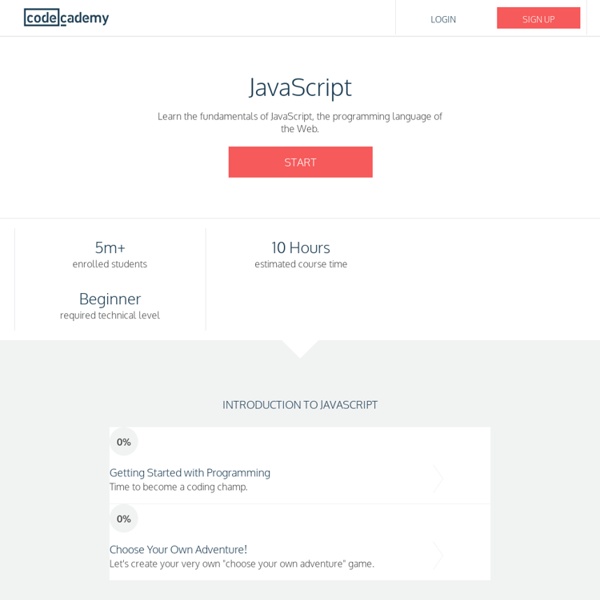 4 Beginner Projects for Launching into Game Programming Photo credit: minipixel Lots of students and beginner developers ask me, “What’s the fastest way to become a game programmer?” Once you’re an amazing programmer, the world is open to you. You can make your own indie projects. Other developers and artists will want to work with you. Bring Your Design to Life: Intro to Motion Graphics Have an illustration you would love to animate? Maybe that photograph you took is begging to come to life? In this class I will break down the process top motion graphic and animation studios use from concept to completion. Starting with theory and principles, I will then take you through step by step tutorials on prepping your design for animation, and finally animating it.

How can I start learning Unity fast? ( List Of Tutorials ) The most recent version of this list can be found at I just compiled a list of Unity resources for a different purpose (hence my subjective comments and a shameless copy&paste). Some of the resources have already been mentioned here and some of it is only Unity-related and not strictly for learning Unity itself. Nonetheless, here we go: Download the free version of Unity to get started: If you have no previous experience with Unity, start with these six video tutorials which give a quick overview of the Unity interface and some important features Triggering Navigation with Scrolling in JQuery Home > CSS, Front End Development, How to, HTML, Javascript > Triggering Navigation with Scrolling in JQuery Scrolling as your sites main source of navigation is all the rage. With the amount of one page sites out there I thought it would be helpful to show how to trigger your navigation to changed based on how far you’ve scrolled down. What we’re building We’ll be creating a simple 1 page site. Actually we’ll just be stealing the code from the previous post on Smooth Scrolling in Jquery, and adding in the navigation triggering bits.

Things I Wish Someone Had Told Me When I Was Learning How to Code — Learning to Code Before you learn to code, think about what you want to code Knowing how to code is mostly about building things, and the path is a lot clearer when you have a sense of the end goal. If your goal is “learn to code,” without a clear idea of the kinds of programs you will write and how they will make your life better, you will probably find it a frustrating exercise. I’m a little ashamed to admit that part of my motivation for studying computer science was that I wanted to prove I was smart, and I wanted to be able to get Smart Person jobs. I also liked thinking about math and theory (this book blew my mind at an impressionable age) and the program was a good fit.

25 Best Examples of Free jQuery Content Sliders 25 Best Examples of Free jQuery Content Sliders Details Category: Webdev Recursion Explained with the Flood Fill Algorithm (and Zombies and Cats) The source code of everything in this article can be downloaded here: floodfill_src.zip Consider the Lazy Zombie This is a cat: This is a normal human: Minimal setup for overlay Below you can see two images that launch overlays. There are two terms being used: the trigger is the element that launches the overlay and the overlay is the element that is being positioned on top of the page. The Barcelona Pavilion Barcelona, Spain The Barcelona Pavilion, designed by Ludwig Mies van der Rohe, was the German Pavilion for the 1929 International Exposition in Barcelona, Spain. It was an important building in the history of modern architecture.